More Gems from My Students

Suffice it to say that between the flu and my accident, I have more work than usual to catch up on this weekend. My first sub assignment was for the students to use their vocabulary words in sentences. They had some trouble the first few times I gave them that assignment. I got sentences such as “What is a cascade?” As far as I can tell, you have no idea what the word means if that’s the kind of sentence you create.

A few classes did the assignment when I was with them on Wednesday because it never got to the sub. I’ve read sentences such as “Miss W”s germs suffused the classroom; they filled it” and “The teacher Mrs. W., needed a respite because she is very ill and need[s] to relax.” At least he understands and was polite.

On Sunday, I lectored at my local parish for the evening Mass. It was weird getting up at the same time, and doing my hair, but putting on regular clothes and going about the business of my day. I was paranoid all afternoon that I’d accidentally forget and miss Mass, simultaneously shirking my lector responsibilities. Around midafternoon, my throat started to get a little scratchy, but I get sore throats fairly often, so I didn’t worry. Much. More than usual.

Mass went fine. I got several compliments for lectoring, which happens pretty frequently. I maintain that it’s the Holy Spirit that gave me the gift to read the words he inspired. All I do is transfer the words on the page into something people receive more easily by ear.

After Mass, I came home and had dinner, which included McShane on his way back to ACE Gump. After dinner, I stood up and wondered, “Why does my right leg ache?” The left one’s the bad one. “And my arms…and back–oh, no, I’m sick.” Sure enough, I was running a fever by 9:00. I worked through part of it, concluding that if I recovered overnight, I would still need to be at least partly planned for Monday, if not the whole week.

Monday morning, I was so sick I made it out of bed only long enough to email work for my students to the principal. I slept until nearly 1 p.m., interrupted by a phone call from my vice-principal (he needed to confirm that my lack of presence meant I would be absent) and from my awesome Carpool Buddy checking on me. Unfortunately, falling ill that day meant I had to miss dinner with nuns. I love nuns (and free food), so I was bummed and lonely, but they did invite me to spend spring break with them.

By Monday evening, I was convinced that I’d need just one more day to recover, so I emailed in more work. The first email got a “hope you feel better soon” in reply. The second got nothing. I’m not sure the message was ever passed along. I spent Tuesday coughing, mostly, culminating in a two-hour coughfest while I tried to sleep. I had to get out of bed to take some medicine so I would quit hacking.

This morning, against my better judgment, I got dressed and drove to work. My kids were glad to see me, except when they kept trying to hug me. I warned them, “I’m still sick. Don’t make me angry–I’ll cough on you!” I only sort of meant it. It was a long, long day, but my clear misery and germiness convinced the principal to make accommodations for me tomorrow.

After the last bell, I was out of there like a flash. I still felt terrible, but I managed the drive home…until the driver in front of me slammed on his brakes and I slammed into him. Long story short, there were three cars, but mine was the smallest, so I got the most damage. Physically, I’m okay. I cut my lip, both knees are bruised, and I’m still sick. My amazing housemates came to meet me in the ER and stayed while I had x-rays and such, but aside from some hard bumps, there shouldn’t be any long-term damage.

And I am not going to work tomorrow.

These past two weeks are an insightful bunch. This week(end)’s questions:

Out of the Mouths of Students

My tenth-graders were assigned to write about the qualities of a good leader as a prereading activity for the Aeneid. One of my girls wrote this (lack of focus and extraneous punctuation were left intact):

Good leaders have qualities of a president. For example Martin Luther King Jr; he wanted to help those around him get equal rights and to be treated fairly. A teacher like Miss. W. is good as a leader. She helps me whenever I need it and she tries to make sure we understand and comprehend what we do. Miss. W. takes misfortune and turns it completely around, she ignores it and pray’s for it to get better. In the face of adversity Martin Luther King Jr. kept going and fighting for what was right until his time came to be with God.

I’m no Dr. King, but at least she gets what I’m trying to do every day. At least someone at this school gets it.

People I Know in the News

Via The Ark and the Dove, a Catholic Terps alumni blog, I discovered a great feature article about Sister Dede in the Washington Times. She’s Fr. Bill’s actual sister, a religious sister, and an army surgeon. There’s a great slideshow with it, though some of the images are distressing at first glance.

Also in Catholic Terps/friend news, the MOEs took a great picture at the March for Life that’s Dominican blog. This was the first year I wasn’t able to take the day off to go, and I definitely missed it…in between teaching classes and calling parents to tell them that their children have done no homework, of course.

Before the Super Bowl kicks-off this evening (haha, pun fully intended on that one), take a minute to ponder these football-related questions. :smile: I’m not much of a football enthusiast, so I am going to try my best on this one… lol.

Go support my hostess by posting The Weekly Musing on your blog!

I’m listening to Pandora while grading tests. The tests are mediocre, but Pandora is great. Not only does it play perfectly through my computer speakers (loud enough for me; silent to my housemates despite my open door), but it/she just apologized for not being able to find info on Michelle Branch right away. (Click to view full size.) 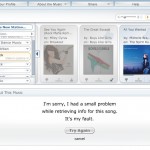 Then I accidentally loaded my blog’s admin screen in the same window, interrupting the music. You win some, you lose some.