Saying Goodbye to an Old Friend

Two weeks ago, I went back to the Catholic Student Center for the first time since I left to join ACE. I got to see Fr. Kyle briefly, and had lunch with Gabriel at Chipotle. It felt so good to be back in the place where my life changed for the better so much. At the same time, it was strange to not really belong there anymore.

On the drive home, my saint bracelet broke. I’ve been wearing it on my right wrist (since I keep my watch on my left) every day since I got it four years ago. Lacy, the CDA Regent at the time, brought a whole bag of them back from Rome, blessed by the Holy Father (already B16 then). I instantly fell in love with it. It was, at the time, my only blessed object, and by the pope, no less! It united me with the CSC and my CDA sister. And more than that, it gave me a subtle but instant and clear outward sign of my Catholicism. It was perfect.

As the years passed, it got more worn and torn. The beads lost their gold paint, the elastic inside was stretched out. Finally, it broke. I was heartbroken. I ordered a shiny new replacement and buried the old one in the backyard with far too much solemnity for a cheap piece of jewelry. It feels good to have a saint bracelet back on my wrist, but it will never quite be the same.

Way back at the end of March, I got to see Switchfoot in concert again, finally. (My first SF concert and, until that night, only, had been in 2006.) It was a little insane getting there. First, the concert was on a Monday night. Who plays on a Monday? I had an early dismissal on the day of the concert, though, so I drove straight to Birmingham on Monday afternoon. Mind you, I had just been in Birmingham the previous weekend, so my lovely Etta was logging significant mileage.

Sarah and I headed downtown a bit later than intended, but we got to WorkPlay during the opening act, Matthew Mayfield. He was good, but nothing magical. Since we were so late, though, we wound up near the back of the hall. I had a great view, though, being behind enough people, and Sarah found some good gaps to look through.

Before the concert started, some of the crew wheeled an enormous plastic case back near the sound board, where Sarah and I were standing. I thought it was strange that they’d move something so huge so late. The thing was half the size of my car, though not as tall. Shortly afterward, the band came out on stage, sans Jon, and began to play. As I anxiously awaited Jon’s delayed entrance, I heard a voice to my right shout, “Hello, Birmingham!” I screamed. Jon Foreman himself had apparently climbed out of the enormous case and was standing on it, right over me! 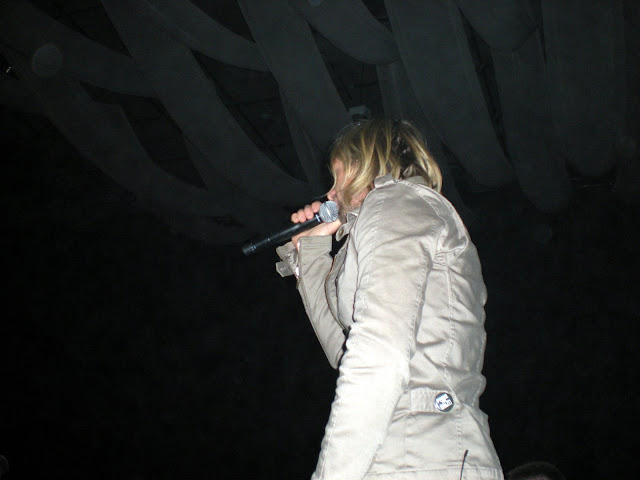 That was one of the most awesome moments of my life. He started the concert by singing the first verse and chorus of “Needle and Haystack Life” from his perch above us there. Never have I been so glad to be in the back!

The rest of the concert was not as amazing as that, but pretty awesome nevertheless. As I had seen in previous concert reviews, Jon broke out an enormous red drum to play during “Free.” He played piano on “Always,” and Chad switched to a single drum and shaker for “Yet.” They did not play “Ammunition,” one of my upbeat faves, or “Only Hope,” but I was satisfied.

By taking a few stealth photos before the show started, I got the set list early and had neither to wonder nor take notes during the concert. It also meant that I knew they’d encore. The “surprise” was spoiled, but not the group sing of the “ooh” lines to “Hello, Hurricane” we used to lure them back.

After the encore, I was very tired and starting to develop the cold that would precede and mingle with my temporary new allergies later that week (which was, of course, Holy Week). Jon is known to do acoustic concerts in the street after shows, but I had to teach the next day. I slept until 5 a.m. and drove straight to school (in Montgomery) on Tuesday morning. Was I exhausted all day in school? Pretty much. Was it worth the incredible journey? Absolutely.

By “photos tomorrow,” I definitely meant “photos a week from now.” Follow the link.

Last night, I planned to do two major things today. I accomplished neither of them, but I am satisfied with what I managed to do.

I went to bed just after midnight with the intent of getting up early (read: before 10 a.m.), going to confession and daily Mass at the Shrine, and buying a new saint bracelet at the Shrine gift shop. Yes, a moment of heartbreak: the saint bracelet I have been wearing every single day for four years, including for my college senior portraits, broke on my wrist on my way back from the UMD campus on Tuesday. I scheduled today’s Shrine visit because I need a replacement.

Unfortunately, I couldn’t get out of bed until 9:40, which meant that I was barely ready to go before 11:30. (I had given up on confession already. The irony is not lost on me.) I realized that I would be too late for Mass, so I decided to swing by the Franciscan Monastery in hopes of a later one.

Unfortunately again, my plans for daily Mass were thwarted. I noticed, though, that there would be a guided tour starting at 1. Desiring to do something productive with my day, I decided to stick around for it. You can only visit the catacomb replicas with a guide, and I was already downtown, so I thought, why not? I found some lovely bracelets in the gift shop, but none in the style I want. (I like my habits; I want a replacement, not a new model.)

My docent for the first half of the tour, Mr. Sweeny, was an adorable old man. I definitely enjoyed the second half more, though. It would be so easy to walk into the church and explore every corner without knowing about the treasures underneath. Pictures tomorrow.

After the tour, I swung by the Shrine in search of the elusive bracelet. They had plenty in the right color and almost the right size, but none with more than just one saint. So I caved and ordered one online. Nothing will ever replace the original (which I now have to bury, fun times), but it’ll be nice not to have a bare wrist anymore.

And with a thirteen-hour drive back north, I have returned. I’m still unpacking the last two years, but I know it was what I needed to do at the time, and I am hoping that it has changed me for the better.

At the moment, I am between jobs. I don’t like to think of myself as unemployed, but I suppose I effectively am. Teaching didn’t work out, so I plan to try youth ministry next. I was accepted to a program in Seattle, but it was more service program than job, and I just can’t afford to make less money than I did in ACE.

In the meantime, I have been cleaning my room and catching up on my reading. I was shocked at how long it took me to clean my room: almost five days! The sad part is that, even though I got rid of a ton of stuff (language warning) and donated my old cell phones and clothes to charity, my room looks almost exactly the same. In the process, I dusted all my furniture. I couldn’t reach the top of my tallest bookshelf, so I stood on a questionable chair to pull down the stuffed animals and dust up there. After moving Tigger, I found the largest spiderweb I have ever seen. I got scared, lost my balance, and crashed into my shorter bookshelf, landing on top of a short pile of books. I knew it was a bad idea to stand on that chair. I did it anyway, so I deserved to fall, but it still hurt my hip … and my pride.

Last night I started gathering together all my potential new jobs into a Google Doc (my housemate Brogan would be so proud!), and tomorrow I plan to polish my résumé and send it off. In the meantime, I am reading up a storm. Who knows when I’ll have this much free time again in my life?