The Academy of (Her Majesty’s) English?

As a former English teacher and holder of a graduate degree in the same in addition to my undergrad degree in British and American literature, I have a thing or two to say about language. My training alone would allow me to comment extensively on the sentence I just wrote. I try to keep it under control, though. I refuse to let any widespread publications at work go by without at least getting a chance to proofread them, a task which I will gladly do even though it’s definitely not in my job description. I don’t correct my mother unless she asks me to. I don’t even hold hard and fast to a lot of what people think are still rules but aren’t or the strictest rules for spoken language.

I will, however, refuse to use “male” and “female” as nouns (a female what? water buffalo?) or allow “they” to be used in place of a single person of unknown gender (“he” is only sexist if you choose to see it that way). Some things about language just ought to be sacred. 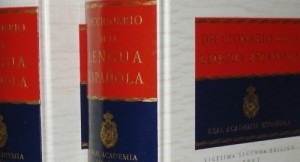 I’m not quite sure how to take this (now old; this one’s from my drafts folder) news of a possible Academy of English, though. If you didn’t know, many other countries whose languages are used around the world (Spain, France, and Italy in particular) have government agencies that are in charge of regulating the language. I loved using the online Diccionario de la Real Academía Española (DRAE) when I was studying Spanish; it was nice to have a definitive answer about how to write. A group called the Queen’s English Society petitioned last year to establish a similar agency for the UK. One could argue that many people already speak English (aside from the UK, U.S., and Australia, it’s an official language of South Africa), but just think of how many countries use Spanish! I think the real problem is that the U.S. already rebelled against England being in charge of it as a territory, so there’s little chance that it’s going to let a foreign language body have control, either.

That said, it would be nice to settle the “they” thing once and for all.