I first downloaded Firefox in my freshman year of college. (Thanks, Andrew!) It took a while to get used to tabs, but I quickly realized they were even better than Microsoft XP’s ability to stack multiple instances of the same program into those cute little menus–and that was a pretty sweet feature once I got into web design. But once I switched to tabs, I knew Internet Explorer would need something huge to turn me back. After IE 8 blurred my screen so badly that I couldn’t read the text on Google (Google! It doesn’t even have that many words!), I never went back. I don’t even know what version of IE came pre-installed on my PC, but I only ever use it if Windows Update tries to force me. 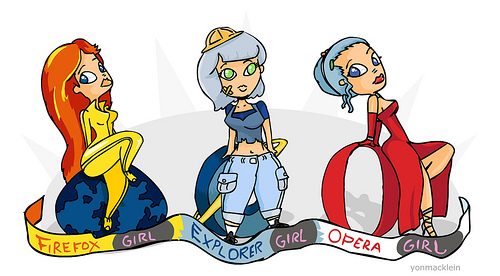 I jumped on FF4 relatively quickly. I wasn’t quite prepared for the shock of such a radically new design, but it’s growing on me. Here are my pros and cons.

The pros have it. There are other “improved” features, but this is what I’ve got so far. Firefox 4 is taking some getting used to, but I’m sold.

From experience, I believe uninstalling a few add-ons will decrease loading times (like the SEO toolbar). I’ve also been able to free some RAM but I didn’t realize it was only 10%. I really like the idea that they’re able to provide a warning for add-on toolbars. I’m not a big fan of downloading these, but I always pay careful attention to any SUN installation that I do (they have to make money some how right?). If you’re interested, we also wrote a post about some add-ons that improve the Firefox experience. You can check it out here:http://www.softwarecrew.com/2011/04/10-great-add-ons-for-tweaking-customising-and-improving-firefox-4/

[…] screen where I could “choose which account I wanted to use with Google Docs.” When Firefox 4 premiered and introduced app tabs, I set my work Firefox to open my Apps email and my regular Google calendar […]