Review: “The Picture of Dorian Gray”

I love reading. These days, I read mostly blogs, but I do pick up the occasional magazines of my alma maters, and I usually get in some pleasure reading at lunch at work. I also find plane reading a lovely way to pass the time…especially when I sync my iPhone wrong and am therefore unable to watch the episodes of Firefly I rented specifically for the trip.

That last situation is exactly what happened to me when I traveled for work last week, but I had prepared for just such a situation (and possible battery death) by packing the actual paper book I’d been working on, Oscar Wilde’s only novel, The Picture of Dorian Gray. My experience with Dorian Gray mirrors my experience with real books in general. I purchased this particular edition of the novel via Amazon five years ago. I needed free shipping, it was cheap, and classics are usually good choices. I only got around to actually reading it in May. I read The Importance of Being Earnest (a play) during my junior year of high school and of my own volition, so I thought I’d take a chance on Dorian Gray. Single novels tend to be outstanding. As in To Kill a Mockingbird, they can be incredible. As in Invisible Man (by Ellison, not Wells), they can be…less than incredible. At least that’s what I think. I will admit that I have never enjoyed reading classics outside of the classroom, though. I need the ready opinions of teachers and critics and the drama of discussion to keep me going. That was even true when I taught them in my own classroom. I guess I need a classic classroom setting to enjoy classics.

The Importance of Being Earnest, however, was wonderful, and I read it outside of the classroom. I’ve enjoyed reading plays for years despite the paradox of reading something meant to be performed. Tartuffe was written to be read, but there’s a reason that the obscure French movement of unperformable plays is obscure. I had high hopes for Dorian Gray, having discussed many of Wilde’s epigrams in a college seminar on humor. As this edition’s introduction writer, Gary Schmidgall, mentioned, one of the delights of reading Dorian Gray is seeing those epigrams in their original context.

Overall, I was disappointed–with the book, that is. There are a variety of ways to look at a novel. The jargon term is “critical lenses”: feminist, Marxist, historical-biographical, psychoanalytical, and formalist, among others. I favor formalism. I like to look at the words on the page and judge them for themselves. Looking at Dorian Gray formally, it was lamentable at best. 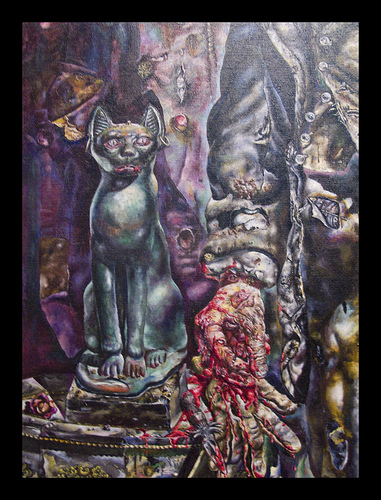 I love stories even more than I love reading. Dorian’s story was not compelling. It was like The Catcher in the Rye for me–and I read that one three times years apart! I understand that Dorian is an model of man when his hedonistic nature gets the best of him. The “secret” of the plot is widely known: Young Dorian Gray loses his soul as it is absorbed by a mysterious portrait of himself. The portrait ages; he does not. There is, of course, more to the story. In the first half of the novel, Dorian plays the rich ingenue who falls in love with an actress: by definition a woman well below his station. His friends, including the portrait painter, discourage his romance. The woman dies. Dorian is not upset. He discovers his portrait’s secret and begins to take more drastic steps toward pushing the limits of its power. His friends visibly age; he does not. He falls prey to soul-destroying habits; the portrait’s curious facial expression deepens. I won’t ruin the full ending, but I saw it coming. As a story, Dorian Gray is little more than a cautionary tale sprinkled with Wilde’s delicious wit.

Reading from a Catholic perspective (which is really my only perspective), Dorian is a fantastic example of the dangerous allure of sin. Although Dorian’s portrait has no equal in real life, sin is very real in this life. The temptation to do whatever brings us the most personal happiness and to avoid any possibility of pain is overwhelming. For a compulsive overeater, giving in to temptation looks like buying cookies instead of graham crackers. For a parent, it looks like gambling instead of contributing to the family finances. For Dorian Gray, it looks like indulging in the mysterious power of a simple painting to the point of causing it to bear blood on its hands.

Nowadays people know the price of everything and the value of nothing.

What is the price of my soul? Nothing less than the blood of the Son of God. What is its value? Eternal life.

[…] earbuds are so amazing that I usually pop on my iPhone and listen while I’m reading a book. The last time I flew, the plan was to watch some Firefly and then read Dorian Gray while listening to my iPhone. Since I […]