Last week, I read a book that I could not put down. Even when I paused to gasp or to ponder what I’d just read, I only stopped long enough to process my thoughts, and then I immediately went back to turning pages as fast as I could. I was stunned and excited, and it was fantastic.

I was not reading a Harry Potter book. I was reading Bumped, the latest novel by Megan McCafferty of Jessica Darling series YA fame. She sucked me in, took me on an incredible ride, and stopped at the edge of a cliff. But then she promised me a sequel, so we’re cool now. 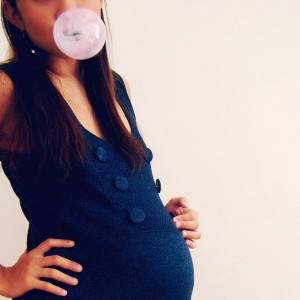 Bumped is based on the premise that, sometime in the near future, HIV has been cured, but 75% of the world’s population suffers from the Human Progressive Sterility Virus (HPSV). Effectively, no one over the age of eighteen can conceive a child. Human fertility spans from puberty to the beginning of legal adulthood. For sixteen-year-old New Jerseyian Melody and her friends, life consists of school, activities, and the high-stakes teenage surrogate market. Wealthy adults pay big bucks in college tuition, cars, and six-figure signing bonuses to convince teen girls to conceive with hand-picked teen boys, carry the children to term, and turn them over immediately after birth. Melody has an enviable contract lined up and is just waiting for the parents to pick the boy she’ll “bump” with when the twin sister she never knew she had shows up on her doorstep. Harmony has grown up in a strict religious community, awaiting the day when she can fulfill her feminine promise of motherhood, but when she finds out about Melody, she finds an escape from her own secrets in the chance to save her sister from the sin of “pregging for profit.” Chaos ensues.

[…] by Megan McCafferty: It’s coming out on April 24, and I am so excited! Bumped blew my mind, and even though the premise leaves me a little confused and uneasy, I’m still going to […]

[…] Thumped: I’ve been stalking the library waiting for a copy to become available with no luck. I’ll have to request it, and that requires some delicate timing because I have to be available to pick it up. I can’t wait to find out what happens, though, and if it will suck me in as far as Bumped did! […]

[…] dealing with sex and babies have swung hard liberal, and people are buying other people. I’ve gushed far enough about this book, but I can’t help […]