Me and Reality TV

I like to watch TV. I’m doing it as I write this post, to be honest. I usually watch scripted shows, but I will admit to being into reality shows to passing degrees over time. My first reality TV love was The Real World. It was and remains the original reality TV show, and it was huge before any of the others got even mildly popular. I watched Road Rules during that same season (10 for both), which was always a bit stranger because the cast had to not only live together but also be on a game show, more or less. Yet we still have game shows. Curious. I also had a thing for Survivor for a few seasons, but that got old after Australia. 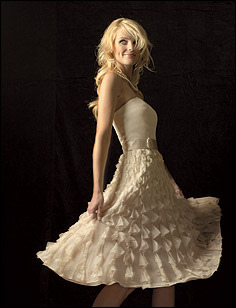 I don't like short dresses; they seem too informal. She looks happy, though. (photo by Michelle Skipper)

These days, I tend to stay away from reality shows. When the competition-style shows got more popular, they just turned into manipulation of ordinary people by produces (Joe Millionaire, anyone?) I’ve seen bits of Wipeout when I’m waiting for Grey’s Anatomy; I still can’t quite believe they just took the ridiculous Japanese game show concept, put Americans on it, and made it work. I do have to admit to enjoying Say Yes to the Dress, though. I love seeing all the wedding gowns and the ceremonies at the end, and I like to imagine what it would be like to have thousands of dollars to spend on the dress alone. (The boutique basically starts at two grand.) Some people seem to think of reality TV as the fast track to fame, but they get infamy so much more often.

I can’t make a definitive statement on why reality shows are so popular. Part of their popularity must be simple voyeurism: we like having a sanctioned way to watch other people’s lives. Reality TV shows tend toward ridiculousness, which I’m sure any show would with that kind of story editing. (If you didn’t already know, these shows do hire people whose job it is to fashion stories out of people’s lives.) Sure, I get ridiculous, too, but at least I have enough sense not to show everyone on national TV. Then again, the “reality” of reality shows is intriguing. Television was pretty unrealistic (but sometimes still awesome; thanks, Lucy!) until the 70’s and 80’s, so there’s some merit in showing what people are actually like…or rather, what people will most like to watch.

[…] at just the right length on my long legs to kick up fantastically when I walk. If I weren’t opposed to short wedding gowns, I’d want something like that for my future walk up the […]

[…] sposi novelli blessing soon afterwards, so I will need something classy and Vatican-appropriate. I’ve never liked short wedding dresses, so I passed on those easily. I have no opinion on […]