I don’t go to the movies very often (which is good for my wallet), but the beauty of DVR has let me catch several movies that I wanted to see but never got around to. Juno was the last one I saw that way. Today, I finally managed to watch a movie I recorded in May, Vantage Point. 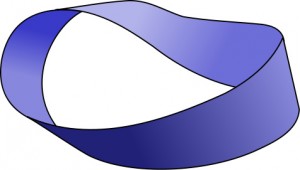 Imagine the plot of the movie walking along one "side" of this mobius strip, and you get the idea.

Only half the premise of Vantage Point drew me in. I can usually handle political action thrillers if they have something else to pique my interest. In this movie, it was the storytelling technique. The plot is that the president of the United States is giving a speech to begin an antiterrorism summit in the Plaza Mayor in Salamanca, Spain. He is suddenly shot while news cameras, all the people filling the plaza, and various important characters watch. An ordinary film would follow a single action hero struggling to thwart the bad guys. In this case, the story is retold from the beginning several times from the points of view (the “vantage points”) of several people. Just when you think you know what’s going on, even from two different angles, it turns out that something else is up and your vantage point changes.

I loved it. I have a soft spot for this dramatic technique, which has been used in everything from Groundhog Day (the movie) to episodes of Xena, Dawson’s Creek, and Buffy. I was surprised at the number and particular combination of well-known actors: from Sigourney Weaver, Forrest Whitaker, and Dennis Quaid to Matthew Fox and Zoe Saldana. Their acting was great, and the effects were fantastic, especially the big chase scene. Although the plot was nothing special, the technique took it over the top. Vantage Point is definitely an “oldie but goodie”.

I can’t remember if I saw this movie in entirety or not. For some reason, I remember my parents watching it one night, but I don’t remember much about what happened after they started going around and trying to find all of those different witnesses. Maybe I’ll have to watch this again at some point…

It’s nothing to write home about, but it’s definitely worth watching.

P.S. I’m glad you came by to comment just now. I had messed something else up besides the .htaccess, but I fixed it.