Today feels like the end of two very long days, so I am entirely uninspired to do a proper post. Instead, here’s pictures.

I usually try not to post images from other sites without CC permission, but this was too cute to resist. I was trying to post something on Twitter for work, and this was the error message. (Click for larger image.) 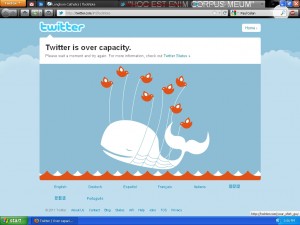 At a totally different point in time (the end of June), my favorite dictionary/site, Merriam-Webster, unveiled its time-sensitive vocabulary quiz. I powered through it for the results below.

I’m not sure how the “70 and above” group came in so high, but I’m all for smart grandmas.

This is intriguing. I’ve been very pleased with these last few F5s.

That was actually quite fun!

Booking Through Thursday: In Public

Do you carry books with you when you’re out and about in the world?

And, do you ever try to hide the covers?

I do carry books around. I do a significant amount of reading while I eat lunch at work. Sometimes my coworkers feel like they’re bothering me when they come in and see me with a book, but I am always willing to put down the book and switch to conversation. I am embarrassed sometimes to be caught reading my sillier YA fiction, especially at work. My recent Alice run was particularly trying. Now I know how most of the readers of FYA feel. I believe in standing by your choices, though, and I stuck with mine. I have never tried to hide a cover for the same reason. Yes, some cover choices are really awful. (Why would a headless skinny girl make me want to buy a book?) That’s the luck of the draw, though, and at least it gives us something to make fun of. Who doesn’t like a little humor on top of awesomeness?

Hail Marys in Your Hail Marys

I’ve just joined in a novena to St. Raphael the Archangel with my friend Sabrina and some of the other Catholic 20-Somethings. This one is set to be maybe the second novena I’ve ever completed by keeping up with all nine days. We’ll see how it turns out.

In tangential news, recently at work, students have been leading the Angelus before Mass. I usually take the time before Mass to pray the rosary by myself, so I was definitely caught off guard the first time they did it. I was a few Hail Marys shy of finishing, so it was particularly unusual to be interrupted for the Angelus since it’s just more Hail Marys. I felt like this image from LOLSaints:

which parodies Xzibit on Pimp My Ride because he put everything from fishtanks to clothes dryers in the cars he “pimped”: 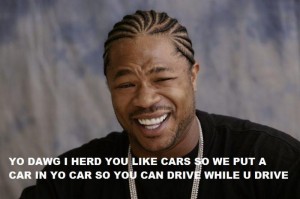 except that for me, it was, “Yo, dawg, I heard you like Mary, so I put Hail Marys in your Hail Marys so you can pray to Mary while you pray to Mary.” It was an odd thought to have in church, but it made getting interrupted a whole lot more fun.

This One’s for Everyone (Review: “Who Gets the Drumstick?”) 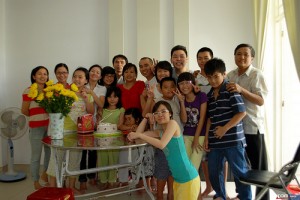 Do you have a favorite childhood movie? Mine was probably one of my Disney Sing Along Songs videos. I also remember the real movies my mom made me watch: Grease (which I was definitely too young for), The Sound of Music (which is always awesome…when you have 3 hours to spare), and Stephen King’s It (which was a very bad call). She also made me watch Yours, Mine, and Ours, though, which was so much fun, and not just for the novelty of seeing Lucille Ball play someone who was not a caricature of herself. I recently discovered the book upon which the movie was loosely based. It is far superior.

The original Yours, Mine, and Ours (1968) starred Lucille Ball and Henry Fonda as a widow and widower with eight and ten children, respectively. They meet, fall in love, and have madcap adventures blending their two large families into one. The movie was remade in 2005 with Rene Russo and Dennis Quaid, but all that remained of the true story was the sizes of the families and the parents’ names. Dissatisfied with the Hollywood edits, I sought out the original book, titled Who Gets the Drumstick? It’s out of print, but the good old Austin Public Library just happens to own a copy.

Another nice topic this week, but this one’s better executed than the last (pun not intended).

I’m in just under the wire this week.

Have you ever finished a book and loved it so much you went right back and started re-reading it again?

(And obviously, if so, we want titles!)

I don’t think I’ve ever reread a book immediately, but I’ve definitely read books that I knew I would reread: Feed, The Westing Game, Holes, The Hunger Games, and of course every Harry Potter book. Now, I haven’t actually reread all of those, but I know I will. Some books just require a second look.