It’s no secret that I’m into religion. It’s literally my job. What may come as a surprise is that I, a Catholic, believe in tithing.

When my family was going to church regularly, I let my parents be in charge of putting any (or no) money into the collection basket. That was easy, because I was still too young to even have an after-school job. I never paid much attention to how much they put in, but I don’t think I ever saw anything more than a five-dollar bill.

Fast-forward to my reversion in college. I don’t remember if I gave any money on that first Ash Wednesday, but I might have tossed in a dollar. Ash Wednesday collections are unusual because it is a weekday and not a holy day of obligation, so there wouldn’t normally be a collection; I might not have even had the opportunity to give. Once I got more involved at the Catholic Student Center, though, and I spent time reading Boundless and really thinking about what I wanted my faith to mean, I began to consider tithing. 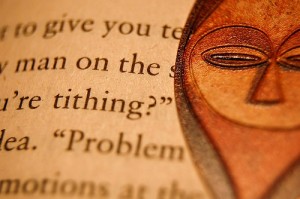 Some Christian writers insisted on the biblical ten percent; others simply recommended giving enough to hurt, so to speak. Overall, everyone stressed the importance of giving more than zero dollars. So I tried it. Every week for a few weeks, I put $2 into the basket. It was more than nothing, but not more than I could easily spare. Sometimes, I wouldn’t have two one-dollar bills, so I’d toss in a five one week and purposely give nothing the next. I noticed that, even on weeks when I gave $5 instead of $2, I didn’t miss it. It felt good to be freely donating from my own money. No one had to know about it since I gave cash. Eventually, my weekly $2 became a weekly $5, and it more or less stayed that way until I finished college.

When I joined ACE, I considered giving up on giving. I’d committed to two years of objective poverty. But some part of me knew that I needed to keep giving money on top of my giving of self. I needed to show that I trusted God enough to freely give back from the little bit I’d purposely agreed to earn. Since my income was technically greater than it had been in college (even though my expenses were, too), I stepped up my tithe to $10 a week. I registered with my parish and gave using envelopes, so I wasn’t anonymous anymore, even when I gave cash. My parish was in a wealthy neighborhood, so (I hope) my contribution paled in comparison to others’, but I could still call it my parish because my money contributed to it. I volunteered as a lector as well, so I was finally giving “time, talent, and treasure” to a real parish. I continued to give money at my parish during my second year in ACE even though I no longer lectored. I was giving enough to notice that it was gone, but I wasn’t struggling without that cash. The habit stuck. 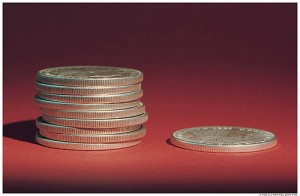 Since my current job is as close to a “real job” as I’ve ever had, I decided to try tithing in earnest. Our old development director wrote an article for our newsletter about tithing, and I also came across a helpful homily by Bishop Taylor of Little Rock. Since my job depends entirely on my faith, I decided to go in all the way this year. Following the bishop’s advice, I dropped three zeroes and started writing a check every week that will add up to 5% of my salary. I have intentionally given to various charities I care about (like Annunciation Maternity Home and debt elimination for people entering religious life). I will make a pledge to the diocesan Catholic Services Appeal. I would do these things even if I didn’t work for my parish, and I’m glad I do it.

It’s been strange to see my money go out in larger amounts than I’ve ever given before, but it just seems right. I’ve heard it said that, if you want to tell where someone’s loyalties really lie, you should read his checkbook register. Now, mine finally shows what I truly care about.

[…] written my thoughts about learning to tithe before. I have been giving to the Catholic Services Appeal monthly since I worked at the UCC. […]

[…] don’t mind homilies or articles about tithing. I was convicted to start giving by percentage instead of dollar amount years ago. When I get my tax letters in January, I’m always astonished by how much that adds […]

[…] think about this whenever I consider parish stewardship. I have a plan for myself, but the reality is that the bystander effect (“someone else will help”) is […]

[…] I do my hair and makeup. This week, I did not remember to put my phone in my purse. I also usually write out my tithe check right before leaving and enter the check number into my YNAB app immediately. I wrote the check […]