It’s been three weeks since my last Quick Takes, and about a week of that is reserved for a future post, so I apologize if I’m more scattered than usual this time. First of all, I went to Nicaragua for spring break, which was fantastic and will require longer than a Quick Take to appropriately recap. I’ll come link it after I’ve written it.

I discovered as I was doing my laundry the week after I got back that I never should have waited that long to wash so many very dirty clothes. I will have to tuck away that tidbit for future mom usage: Hard work stinks.

My parents’ 30th anniversary is on Tuesday! Wow. My lack of having been alive for thirty years notwithstanding, I can’t imagine what it takes to get that far. I can only hope my future marriage lasts for thirty years…or more. (Women in my family tend to live to be very old.)

At the Hallmark Store this evening, I discovered that thirty is not a popular card-sending anniversary. Twenty-five, sure. Fifty. But not thirty. Thirty gets a gemstone, pearl, so it is so much to ask for a nice, store-printed card with pearls on it? 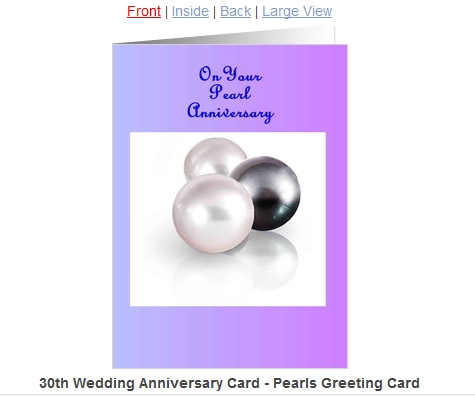 This looks super generic. Those pearls could be for anything. 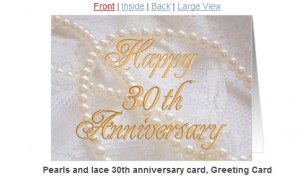 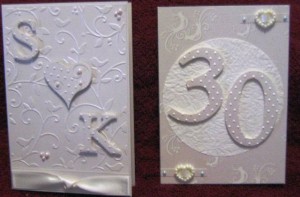 This one is incredibly beautiful, but clearly handmade.

I’ll work on a better plan for thirty-five. Hopefully it will be one that doesn’t involve a Friday night trip to the post office drop box.

This weekend only, the code HITUMBLR will get you a $2 credit for free mp3s at Amazon MP3. (They just started an Amazon Music Tumblr.) I highly recommend Amazon MP3. It has great deals like free credits (I’ve cashed in so many codes over the last year!); it offers 100 CDs in various genres for $5 each each month; and some of the individual songs are not available in iTunes, are the same price, or are cheaper. You do have to download a small piece of software to purchase albums, but not individual songs, and of course, mp3s play on computers and any portable digital music device (including iDevices). Go check it out—for free!

I didn’t take any good Instagram photos this week. The Texas wildflowers are out, but I only see them when I’m driving, and trying to take photos while driving is almost asking for an awful accident. I did catch the most beautiful glimpse of Jupiter and Venus framing the crescent moon on my way out of work on Monday night, though. It was so breathtaking. 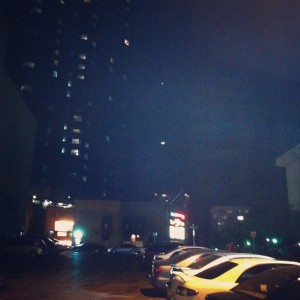 I took that mostly to capture the moment. Downtown lights ruin photos, and although phone cameras have come very far, they’re not perfect.

I haven’t seen the Hunger Games movie yet, but I will after Easter. I’ve been getting a ton of extra hits here for people looking for Catholic reviews, though. ACNM had the same result. I hope I inspired at least some of those visitors to read the book(s), and that they weren’t too disappointed. Unless they have extra time and money to toss my way, they’re going to have to wait. Small-time reviewers like me don’t get advance screenings of big films like that. Yet.

In the meantime, isn’t this shirt awesome? HP and HG fans unite!

Your odds of being awesome for wearing this shirt are very, very high.

Just when I was thinking, what could possibly top off my Quick Takes better than HP+HG? 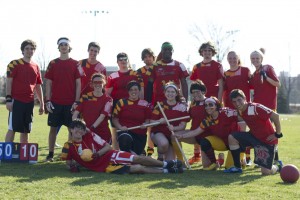 Ted and Sarah both asked similar questions about relating to characters:

Are there any fictional characters whom you have emulated (or tried to)? Who and why?

What literary character do you feel is most like you personality-wise (explain)?

I don’t think I’ve ever purposely tried to be like a fictional character. There are aspects of characters I’ve wanted to imitate (Jamie’s open heart for Landon in A Walk to Remember, for example), but I’ve never even dressed up like a book character before. Maybe next Halloween.

I share some characteristics or experiences with almost all the YA protagonists I read about. I think that’s why I love YA so much. I was never a wild kid, but I had angst and stress and worry. I’m pretty sure I still have all of that! 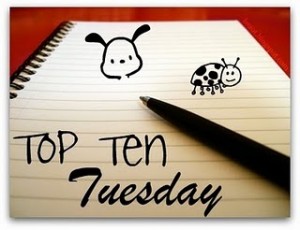 One of the great things about my job is that I do many things I used to do (and still do sometimes) for free: talk about Jesus, go on retreats, pray. I also get to do a lot of spiritual reading. In my (rare) moments of downtime, I’ve been known to bust out an encyclical or Catholic website article. The line between personal growth and professional development is so very thin.

But some books just aren’t work-appropriate, so I have to save them for lunchtime. There are a few books I would duck out of work for. I have too much vacation time, so that’d actually make my business manager pleased, come to think of it.

I wouldn’t play hooky in its strictest sense because I like my job and don’t want to lose it, and it seems so counterfeit to skip work at a church.

Eight is going to have to be enough for this week. The thought of my needing to read so many books is making me upset and, ironically, I have to go to work now.

At work today, I either had an idea for a post I ought to write tonight or just the idea that I ought to post tonight. I can’t remember which.

In the meantime, I’m continuing my journey through the “I should blog about that!” backlog. Today we have an old Catholic Education Resource Center article, “Don’t Impose Your Morality on Me!” by the wonderful Dr. Ted Sri, currently of the Augustine Institute in Colorado. In it, Dr. Sri notes the logical fallacy that, if you believe all truth is subjective and there is no absolute morality, you’ve just admitted that you believe one thing is absolutely true: there is no absolute truth. I gave a whole speech in Spanish in college about how I believe truth is objective. Not everyone agreed with me, but my Spanish was good enough, and at least I have a real opinion.

The key to the prevalence of moral relativism, Sri writes, is that it has become the default. Personal preferences are so important that it seems unfair to deny people the right to believe and do whatever they want. Yet most people would tell you that rape and murder are wrong—but if nothing is really “wrong,” how do they know that? 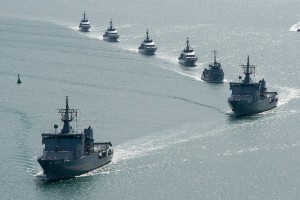 Finally, Sri draws in just one of the brilliant arguments from C.S. Lewis’s Mere Christianity (a book I love). Lewis compares living morally to sailing a fleet of ships. Two things must be true for the fleet to sail successfully: they have to stay in formation and they have to be able to stay in formation. The first requirement concerns social relationships: the “don’t hurt people” aspect. The second is just as important, though: don’t hurt yourself. If you can’t control your ship, it doesn’t matter what the rest of the fleet is doing; you’ll never be able to even attempt to stay in formation. Similarly, if you are lazy, selfish, and short-sighted, not hurting other people is going to be a lot harder.

Dr. Sri possesses the gift of the modern apologist: the ability to speak the truth profoundly, accessibly, and concisely. I can only hope to achieve the same for myself someday.

The original poster over at The Broke and the Bookish this week narrowed this down to books coming out during the season of spring. I am never quite that interested in new releases, so I’m going to list instead my

Top Ten Books To Be Read (TBR) This Spring

That last section was three books, but otherwise I actually got ten in this week, and just before midnight! Hooray!