Although my post on getting into Pottermore during the beta testing period remains one of my most popular posts, I never had an opportunity to go back into it and see what else was in store. I was already enchanted by the prospect of more information about the world of Harry Potter, and I’m coming to find that I enjoy reliving the experience. Today, I finally made it to Diagon Alley. 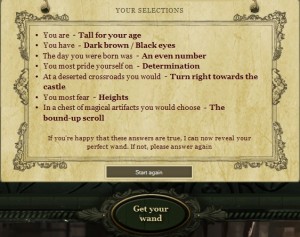 I thought these were intriguing questions because they didn't all point obviously at a specific result. I hope the Sorting is just as subtle.

My wand is aspen and unicorn hair, fourteen and a half inches, and unbending. I think the extreme length is because I answered that I am “tall for my age.” I am pretty tall, but at my age, everyone has stopped growing. I also answered that determination was my best quality (it’s really perseverance, but that seemed closest), rather than intelligence, so I think that’s why I wound up “unbending.” And finally, according to the amazing new details in the additional writing by J.K. Rowling (who knew we’d learn Mr. Ollivander’s first name? It’s Garrick), unicorn hair is “the most consistent,” although not the most powerful, and “prone to melancholy.” I’d hate to imagine what would happen if you were in the middle of a life-and-death battle (say, that Of Hogwarts) and your wand suddenly got depressed. Yikes. I must also give Rowling mega vocab points for using the word “perspicacity” in her descriptions of the ideal wand-owners for various types of wand wood. (That’s not mine, though; aspen owners are apparently determined [there it is!] and revolutionaries [perhaps not so much].)

As I uncovered all of this fantastic new information, I wondered if any of it wound up in the HP Lexicon. The answer is no. Steve Vander Ark, who runs the Lexicon, has decided not to include the information so as not to spoil the surprise for other Pottermore users. I don’t think that’s the right choice. At the very least, it’s not a decision that will last forever. The very existence of the Lexicon “spoils” the experience of anyone who opts to read its chapter-by-chapter summaries before (or instead of) the actual books, or to look up a character’s biography before they’ve finished the series. There are quotations all over the place to provide references for the Lexicon’s information. Just as the site includes information from the old chocolate frog cards (which ruins the surprise of finding it out by hunting down and reading the cards yourself), it could include information from Pottermore. It would be an epic undertaking to get it all incorporated, but the Lexicon as a whole is pretty epic.

I will be on vacation throughout this week, so I’m excited to be able to explore more into Pottermore. It might not have much replay value, but the sheer amount of new material I’ve seen so far makes me very excited about what’s in store next. (And no, I will not be trying to cheat the Sorting. I’m not a cheater.)

[…] miss Harry Potter. I know it hasn’t gone anywhere, per se, and I just started tiptoeing back into Pottermore, so that’s been delightful. But I miss being part of the fandom at FictionAlley and reading […]