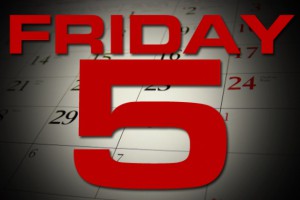 I swear I’m really back in action this time! 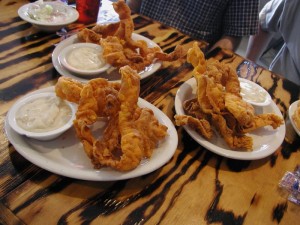 And now I’m caught up on the F5! I feel so accomplished.

Well, it’s been a long time since I did one of these, but let’s not fail to start with a video. I’ve been watching super-recent reruns of How I Met Your Mother (and not even intentionally—that’s the beauty of reruns!), and I realized that I forgot to check the latest of HIMYM’s real fake websites: lilysinlabor.com.

[Note: Neither HIMYM nor some of its real fake sites nor parts of this video are super family-friendly, but they are all hilarious.]

As I type this, I just finished watching Robin Hood: Prince of Thieves on BBC America. I don’t think I’ve ever seen it before, but I enjoyed it. It seemed a lot grittier than other Robin Hood movies I’ve seen, and I was fed up with Kevin Costner’s haircut (seriously!), but it was cool to see Alan Rickman fight. How exactly do you stay that awesome for so long?

I don’t work on Fridays, so I was nowhere near campus for the UT bomb threat this morning. I did get all the emergency alert text messages, though, so I knew what was happening. I watched the news coverage on TV once it finally started, but listening to their inaccuracies and lack of information made me so fed up that I just quit watching. I was reaffirmed in my decision to never watch TV news in general (except for press conferences, maybe), and I can confirm that the best information comes straight from the source.

The only valid point the news had was that some students didn’t receive the texts. First of all, that’s just a technical glitch, and second of all, not all students can be assumed to have phones. They’ll find out the old-fashioned way: their friends, classmates, strangers, and TV reporters on the street will tell them.

I will give the TV news one credit: they knew it was a bomb threat before the texts came right out and said it. I had a suspicion from the directions (move out of buildings and get far away from them), but it would have been nice to know from the beginning. There’s a fine line between inciting panic and giving information (see also Virginia Tech).

I knew it would be tricky to come up with all seven takes this week. And it is. I’ll try to be more interesting next week.

The Best Way to Pray Spontaneously As a Catholic

I work for the Catholic Church. One of our goals is to help students develop their faith lives, so we try to expose them to different prayers, types of prayer, and ways to pray.

But let me tell you: Modeling spontaneous prayer is tough. It’s hard enough to speak in public without vocal fillers, let alone when you’re also praying and trying to help other people pray. I’m always looking for ways to get better at my job, so I was delighted to find the method the Church uses for liturgical prayer distilled down into one simple method.

It’s called You-Who-Do-Through. Joe Paprocki of Catechist’s Journey lays out the details in three posts. First, you direct your prayer toward God or any specific member of the Trinity by any of many titles: Father, God of all creation, Lord of life, and so on.

Next, you “remind” God of something he has done or does now. These can be events from the Bible or less specific: who led the Israelites out of slavery, who is the only just judge, who loves us unconditionally, who called Mary your servant to be the mother of Jesus.

Then comes what is often the longest part of the prayer: you tell God what you want him to do. Bless this meeting and us your servants; fill us with hope; heal all those afflicted with cancer, mental illness, or other disabilities.

Finally, end with an intercession, the person through whom you make your prayer. That’s usually Jesus (“Through Christ our Lord”), but it can also be through Mary or one of the other saints. It never hurts to give your prayers a little extra boost!

Jonathan F. Sullivan created a great handout that summarizes the method [PDF link], but it’s easy enough to commit to memory pretty quickly. I wound up sharing it with my students spontaneously (which, in retrospect, is appropriate for teaching spontaneous prayer), and they took to it very quickly. One of my boss priests even commented positively on it. The students challenged me to model it on the spot, and I totally did it. Give it a try!

You know what is new? My frequency of posting here. I’m not quite sure how I slid into my serious lack of posting, but I am declaring it to be over now. As with Hallie, sometimes parts of my life get in the way of other parts, but I’ve decided I’m not letting that happen anymore.

So, what’s been going on since my last non-book review post?

Now that I’ve written all of that out, I’m going to have to be way more creative than usual for 7 Quick Takes Friday. Brace yourselves, readers. 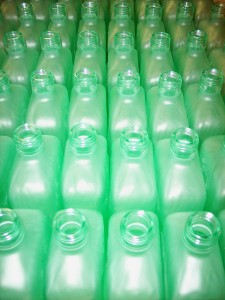