If What I Wore Sunday ever took after Jen and stopped numbering in favor of using subtitles, I would call this outfit “I Can’t Believe This Is Two Days Post-Icepocalypse.”

Yes, just two days ago, it was so terrible that over 100 crashes were reported in the city limits alone, I drove 20 mph to work, and many companies found their VPNs near capacity because everyone was working from home. (Personally, I would have taken an overloaded VPN as an excuse not to work as hard. I work less; everyone benefits!)

Now, with our wi-fi back in action, I was able to wear this decidedly summery outfit to church today. It meant I got to wear one of my favorite got-it-as-a-gift necklaces, too. 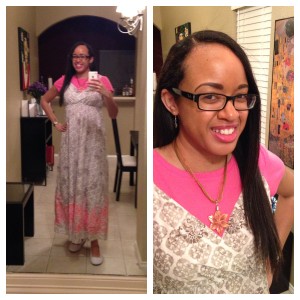 This is a summer maxi dress from Target! It has a white lining, and I wore white shoes and no sweater! For those of you having mini-heart attacks because I wore white shoes between Labor Day and Memorial Day, (a) you clearly do not live in Austin, Texas right now, and (b) that rule is outdated. Besides, I tried it with black shoes and they looked terrible. This was the best choice, trust me. Fergie may not make earth-shattering music, but she designs nice lacy flats. Maybe she didn’t intend them to be worn in January, but that’s what happened today.

I took the opportunity to read for Mass instead of Instagramming today, so I was much more prepared than usual and had a much better experience at Mass. The Psalm stuck out to me. I only learned about a year ago that the Psalm is not only selected to relate to the first reading but also to be our response to it (not just proclaimed responsorially, verse + response). My worries and doubts should be assuaged by my faith in the Lord. I need to honestly admit when they are not. There’s another imperfection to work on! And I was doing so well after going to confession yesterday evening.

At Mass, Msgr. Pastor (his office, not his name) touched on all three readings, which was delightful. He gave us some biblical geography to understand why Zebulun and Naphtali were in darkness, elaborated on the divisions St. Paul lambasted, and called us to be patient like the fishermen who heard the voice of the Lord and left everything behind.

I learned in a Bible study in undergrad that many of the great Old Testament men are shephers (Moses, Abraham, David) because herding sheep is boring. There’s a lot of downtime, which leaves a lot of time and space to hear God speaking to you. Maybe, in the New Testament, the shepherds are fishermen. It makes me wonder what I do that leaves room to listen. Where can I find space for contemplation?