Being Black Is What I Am

It’s pretty obvious when you look at me that I’m not white. My students in my first year of teaching tried to get me to “admit” to being white, but I’m not. My mom’s side of the family has very fair skin, so when you combine my parents, the complex science of skin complexion, and my aversion to being out in the sun, you get this: 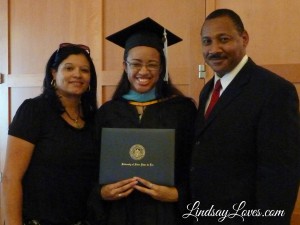 Me with my parents at my graduation from Notre Dame.

I have always preferred being called “black.” There’s something off-putting about “African American,” with or without a hyphen. It seems so PC, and it’s not even accurate. People who are Mexican American have a parent (or a grandparent, or at least an identifiable ancestor) who is from Mexico. Family still in Mexico. A family hometown in Mexico. Some distinct connection to Mexico besides genetics and skin color.

I’m not from Africa. I don’t know where my ancestors came from in Africa. I probably never will, and I don’t much care to find out. So I’m not African American. Moreover, Africa is a continent, not a country.

If you are not black and are trying not to offend, I understand your saying “African American.” The best thing to do, though, is ask. It might be awkward, but it will almost certainly not be offensive. I have medium brown skin. I have been mistaken for native Hawaiian/Polynesian, biracially black and white, Indian from the country of India, Indian as in Native American, and Dominican (the country, not the Catholic religious order [always remember your audience]). None of those are true. I don’t mind when people ask. Then they know they’ve got it right! (I do find it a little amusing, though. I didn’t know I was so racially ambiguous until adolescence.)

(While I am on the subject, I also respect other races’ freedom to choose their own identifying term. Claim your name!)

Being from a suburban Maryland military family, my concept of race growing up was unique. Non-white people are a literal minority in the military. When I was preparing for the Sacrament of Confirmation in middle and high school in our overseas military parish, I was the only black person in the class. That never surprised me. Back in Maryland, in a predominantly black county, my high school graduating class had 15 white people. The total class was 549. “Minority” is a relative term.

With such a complicated background, I have always struggled with what it means to be black. I am, but what does that mean?

What makes me black?

Essentially, it’s the color of my skin and the race of my ancestors. I don’t do black, I am black.

This post was inspired by an article I read on CNN.com today, “Five Things to Know about Black Culture Now.” I think it’s the first time I’ve ever agreed with anything anyone has written about being black. It was probably posted because Black History Month is ending, but it’s relevant to every single month and day of my life.

To define what’s authentically black is virtually impossible, as there are as many ways to be black as there are black people.

I define my own black identity. Finally! I’ve never heard anyone say that before. This freedom is so sweet.

Thanks, Alexis! I’m proud, too.

[…] felt inspired to write yesterday’s post, and I am amazed at the response it received. It is one of my most-viewed posts, right up there […]

[…] already wrote a follow-up to my post on my opinions about black identity, but just in case you’re here through 7QT instead of Facebook and you missed it, […]

[…] presented by Professor Agustin Fuentes of the anthropology department. I’ve written about my opinions on race here before, and I do loves Bones, so I was hopeful about what he’d have to […]

[…] that I don’t fill most people’s expectations for my affinity groups: Catholics, black people, grammarians. I probably do fit most stereotypes of women. That’s not changing anytime soon. […]