These Sundays just keep sneaking up on me! I swear, I go to Mass every week and take the photos after I get home every week, but I just can’t seem to post them every week. Maybe we can pretend it’s because you like picture-heavy posts.

I’ll start with last week. These are the photos where I try not to make my exhausted face after counting the collection post-liturgy. It was pretty darn cool again, but I neglected to wash my tights before Sunday, so I couldn’t wear them and had to settle for thigh-highs. 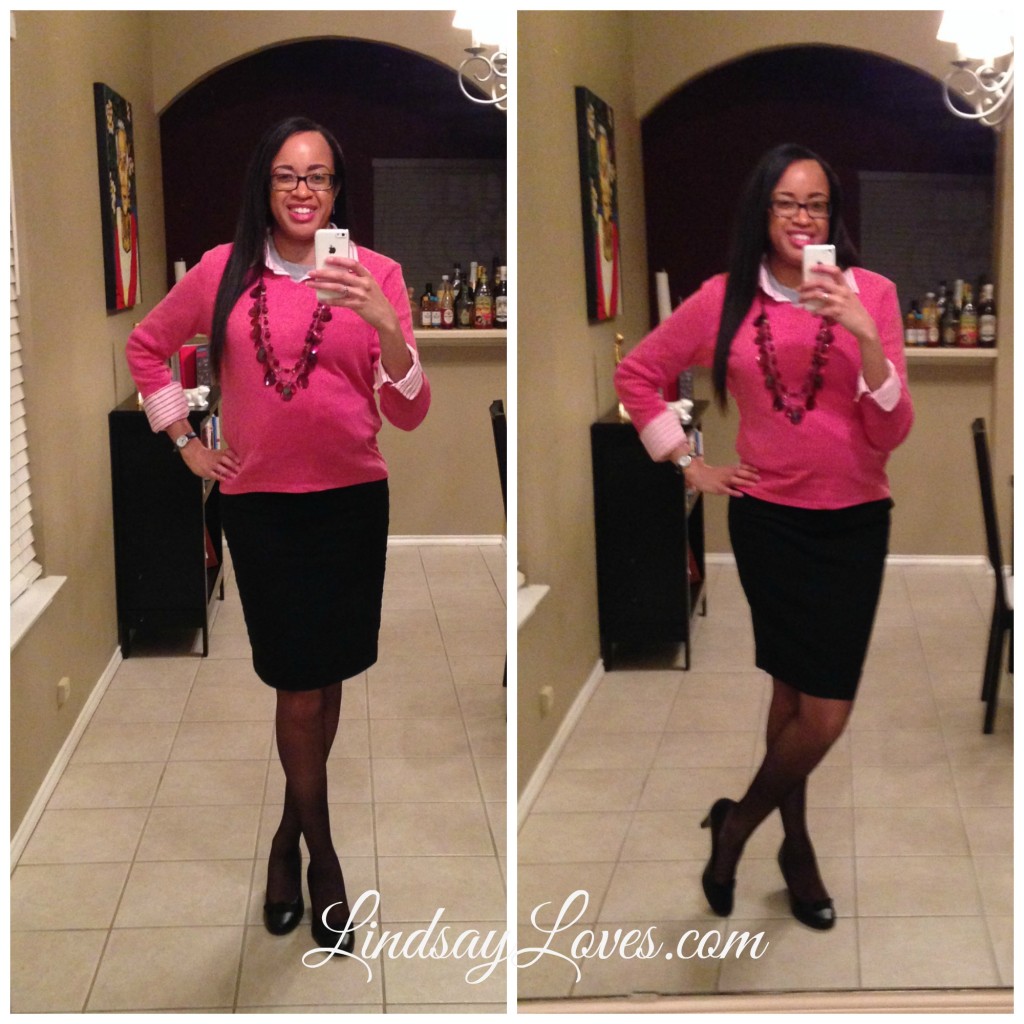 I went bold and decided to wear heels to church again. The right-hand photo is blurry, but you can see the heels better in it.

I have an ongoing internal debate about wearing heels. I’m 5’8″, so wearing heels or wedges puts me above eye-level with most of the guys I know. I used to be really self-conscious about that, but I decided to be less like Tom Cruise (who is routinely filmed at an angle that makes him appear taller than his female costars despite his short stature) and more like Taylor Swift (who is 5’10” barefoot but wears heels whenever she wants). I am tall, and I am owning it! 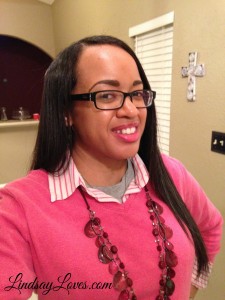 I’ve worn this sweater and button-down combo to work before, but never to church, and never rolled up to let the long sleeves peek through. I was really pleased with the look, especially accessorized with my long deep pink jumble necklace. It wasn’t a rose Sunday, but I only own so much purple anyway.

This week, Palm Sunday, was a distinct challenge. I am a good lector (don’t worry; my complete lack of athletic ability keeps me humble), so I was delighted to be asked to narrate the Passion Gospel at two Masses today, even though that meant getting up extra early.

I was less delighted when my alarm went off this morning.

In my foresight, I selected this outfit the night before and made it out the door just barely on time for the earlier of my two Masses today. I didn’t get my hair flat-ironed, so I touched it up and threw it in a side braid. By evening, I had fixed it. 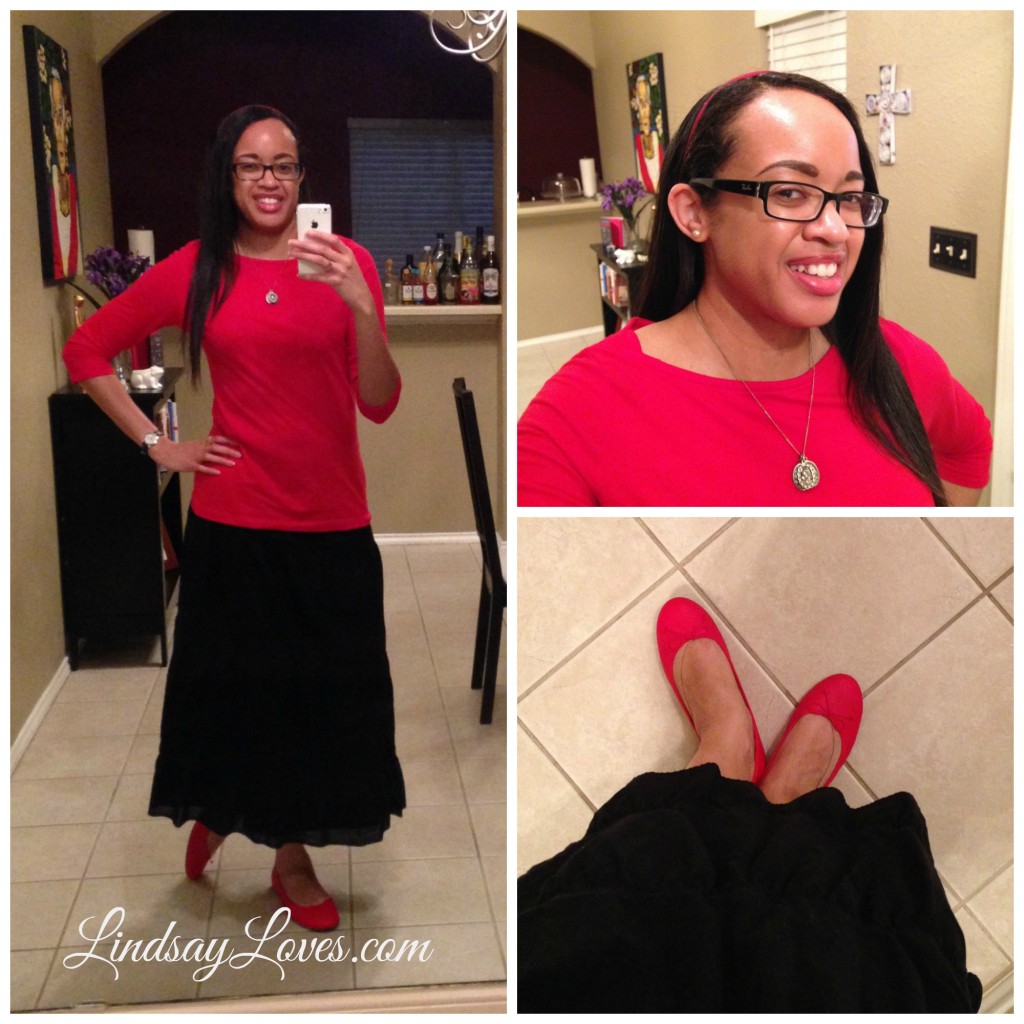 The choice of this skirt was not just to make the red pop. Our pastor decided that all the Passion lectors should wear surplices. No cassocks; just a calf-length surplice. I’ve seen liturgical ministers (usually cantors) wear albs before, and I know that it is our baptismal right to wear the alb, but I’ve never seen anyone wear a surplice without a cassock. I try to give local customs a try before declining to participate, though, so I wore this skirt as a faux cassock. Problem solved! And it looked good.

I love my red ballet flats. I haven’t been bold enough to wear them with anything besides red yet, though!

Due to the long Gospel, we didn’t get much of a homily in the evening. In the morning, though, Fr. Pastor asked us to identify which figure in the Passion we are most like. Honestly, I would probably be one of the disciples who took off running when Jesus was arrested. “He’s getting arrested by the chief priests? Maybe this was a mistake. Maybe I’ve got it wrong. I should probably get out of here.” They came back, though, after the Resurrection. I like to think that the Pharisees and Sadduceees and everyone else who doubted at the beginning came around. Except today’s Jews, of course, but that is a very different story.

Who would you be? Would you have gotten angry like Peter, or despaired like Judas? On some level, aren’t we all every character in this story?

I love the Palm Sunday outfit! It makes you look very lanky.

Also, I’d like to think that I wouldn’t be Judas…but I might need to think a little harder on that one.

Thanks! I’m already tall, so I don’t usually worry about looking short. Looking awkwardly tall is a new hazard!

[…] Stations right before leading the actual prayer service, then a friend’s birthday party, then lectored two Masses on Palm Sunday itself. It was exhausting. I also cleaned the house and managed to eat. I’m glad I have the time to […]

[…] the theme of outfit remixing, you may remember this one from Palm Sunday. This brings a nice sense of continuity to the season and caps off my novena (for which I […]