7 Quick Takes on Harry Potter, To-Do Lists, and What I’m Doing With My Life

Well, I managed to have an entire day off from work in which to write my 7QT post and during which I did no such thing. My talents are not all good.

I didn’t see any particularly hilarious images on Buzzfeed this week, but there is a new Harry Potter story, so that was the best thing I saw on the Internet, hands down. It was the first thing that made me log in to Pottermore in ages. I’m not linking to any of the news reports on it because they’re all biased and totally misreading things. That is a part of the fandom I do not miss.

But as for the story? I loved it. It seemed like the perfect way to write new material: it doesn’t change anything, but it fleshes out the snippets we’ve heard since The End. It is just like all the other new material JKR has been posting on Pottermore the whole time. I guess that since this is a new story about a new time, it drew a bigger audience. Hey, it worked on me!

Today is also the anniversary of the couple whose wedding was the first I attended as an adult. I was invited to be in my friend Lyzii’s wedding, but I had to miss it entirely due to graduate school commitments. That is among my greatest regrets, so I was especially gung-ho about going to Nick and Mary’s.

Since those days, I have had to decline invitations to a few out-of-town weddings due to finances. I know this wedding-heavy phase in my life will end soon, and that it came later for me than for many others, but do those pangs of regret for missing out ever go away? Or is it just FOMO and my love of dance parties?

Last week was very quiet. I stayed in for Independence Day. I missed seeing fireworks, but I needed a day to just rest and be lazy. So I watched four episodes of Joan of Arcadia in a row, and it was glorious.

Subsequently, my Saturday was unusually busy. I managed to meet with a new young adult at my parish, get groceries, go to Confession, clean most of the house, and go out for trivia all in one day. It was a lot of stimulation for this homebody. I had to finish cleaning after I got home on Sunday evening, but I’m calling that a win.

I’ve started using Wunderlist as a to-do application. I’m still getting used to the kinks, but it seems okay so far. I tried Todoist for a few days, but paying for annual access just to add notes was not okay. Wunderlist doesn’t have email-to-task the way I want it, but I can live without that if I have to, since I have the app on my phone.

The mobile app is kind of lame, though. They didn’t update for iOS 7, so it’s still using the old keyboard. That makes it feel so ancient and out of touch! I was delighted to see the announcement just yesterday that they’re rolling out an update soon, but if it takes a year to get such a crucial update, maybe I should have stuck with Google Tasks.

After having Google Reader killed on me, though, I probably shouldn’t get attached to anything besides Gmail. I think Google forgot about Tasks, so they forgot to kill it.

This week was also pretty quiet. I made a last-minute decision (okay, it was the night before) to go to Theology on Tap. I don’t always have the best experience with that, but this one turned out quite well. I had some solid “I have no idea what I’m doing with my life” panic this week, and the topic was vocations and discernment, so that meshed well. I haven’t had a good Holy Spirit moment like that in a while.

Speaking of vocations, my post at Austin CNM this week was a video review again. This time it was Light of Love, produced by Imagine Sisters. One of my former coworkers at the UCC is part of one of the sponsoring organizations, so I heard about the film a year ago when it premiered. I forgot to watch then, though, and I just got around to watching it last weekend. Oops. It was better late than never, though, as my review indicates. 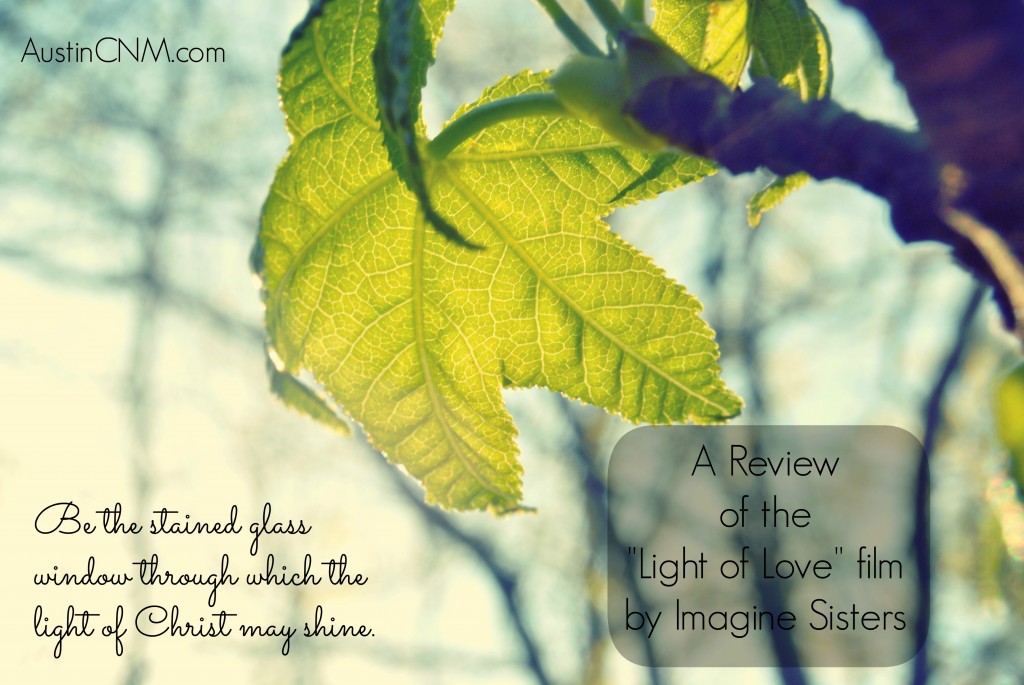 One of the things I didn’t write in my review was that I found the film to be missing a spirit of confidence. Thoughtful, wise, confident, committed: I wanted to see those qualities in the featured sisters in huge doses, but I didn’t. That observation comes more from my frame of mind than the film, though. As I said in Take #5, I have been feeling directionless lately. I don’t know what to do with my life. Sisters do.

When I meet new people and tell them what I do (contract administration), I also have to tell them what I used to do (campus ministry), and what I did before that (teaching high school English). As Jen wrote once, when people ask what you “do,” they’re trying to figure out what kind of person you are.

What kind of person does my history make me sound like? I haven’t been able to figure out yet what will give me a sense of lasting peace. Am I ever going to be able to figure out my life? I’m hoping that, as I continue in prayer and growing in holiness, I’ll figure it out, but any direction you can point me in would be much appreciated.

[…] introduction to him, 70% readings, which is not bad. I wish I could remember more, but this is why my new to-do list is serving me well. I have such a bad […]