My Thoughts for Pope Francis, Part One: How They Know About Family and What They Do About It 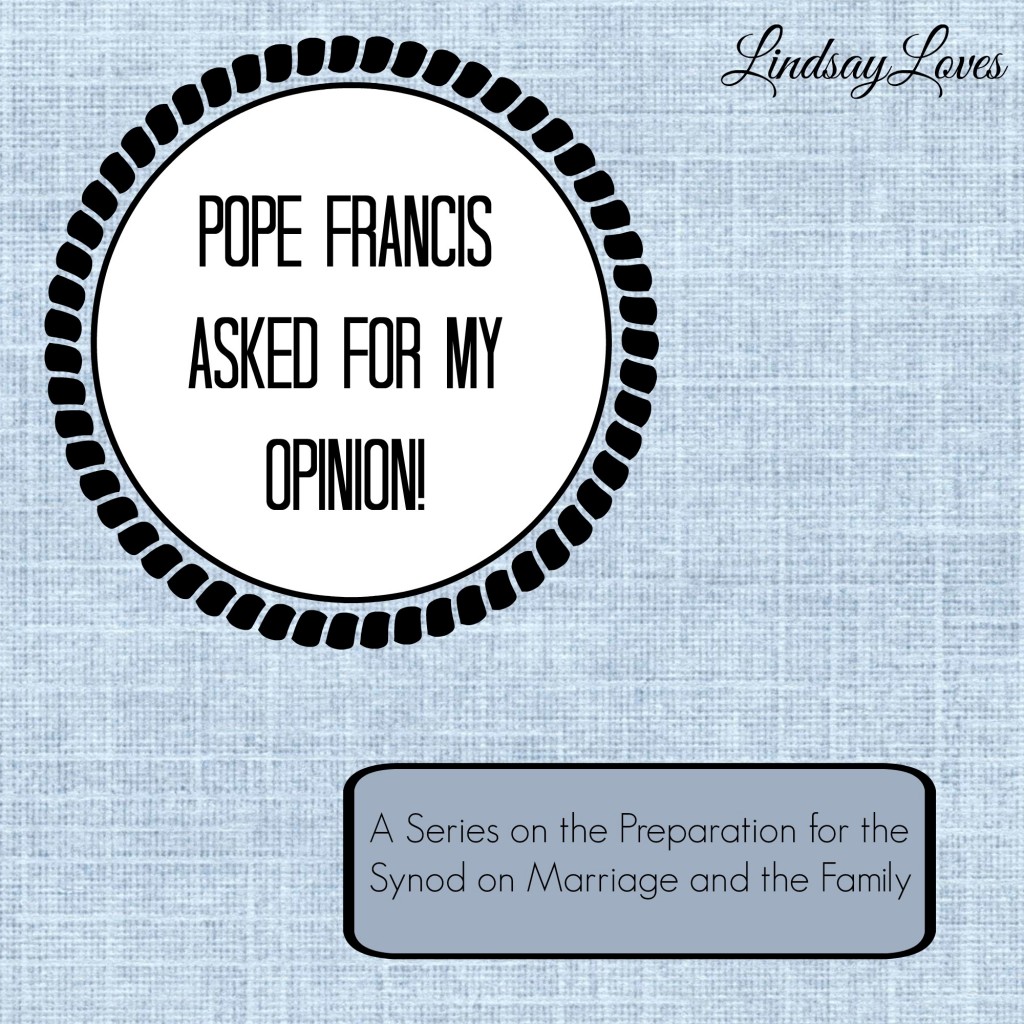 You came back! I’m touched.

This is the second (read the intro here) in a series of posts about the preparation for the synod on marriage and the family. This synod is properly called the Extraordinary General Assembly of the Synod of Bishops on the topic “Pastoral Challenges to the Family in the Context of Evangelization.” That’s a mouthful!

Each post in this series will include the actual questions asked in the survey along with my responses. I invite you to add your responses in the comments or on your own blog.

As I mentioned in the intro, Pope Francis, by way of the Diocese of Austin, asked for my opinion by linking to SurveyMonkey. Before I could get to the actual survey, though, I had to download and read this PDF, the preparatory document. I found it helpful to read that because it put me in the right frame of mind to answer the questions, but I would have found it useful to know that the questions on pages 4–7 were the ones that would be asked in the survey. I could have prepared my answers in advance rather than risk a computer crash or browser refresh that could destroy everything in an instant. With great technological power comes great responsibility. In the end, I copied and pasted my answers into a Google Doc so that I could write this blog series. Score one for planning.

On to the first set of questions and answers! Notes in brackets are mine.

a.k.a. How People Know What the Church Teaches about the Family and What People Do About It

Describe how the Catholic Church’s teachings on the value of the family contained in the Bible, Gaudium et spes, Familiaris consortio and other documents of the post-conciliar [post-Vatican II] Magisterium is understood by people today? [That’s not actually a question.] What formation is given to our people on the Church’s teaching on family life?

Most people know about the Church’s teaching on the value of the family only through homilies on the Feast of the Holy Family, in marriage preparation programs from the last few decades, or by seeking out information on their own. Very few people seek out info on their own, and even marriage prep can miss the opportunity for catechesis about family in particular (versus the married couple on their own). I read Gaudium et spes, and I couldn’t tell you what it says about family off the top of my head. I would say that most people just know that married couples are supposed to stick together for life and that children are supposed to be a good thing.

In those cases where the Church’s teaching is known, is it accepted fully or are there difficulties in putting it into practice? If so, what are they?

Many people reject the Church’s teachings outright because the media, the world, and even extended families make it seem impossible. Struggling parents often don’t have friends or family members to serve as role models giving them hope, advice, and prayer. They can feel pressure to be “done” having children, to live “childfree,” to use contraception, or to be sterilized. Unhappy spouses can be talked into divorce even when reconciliation is possible. Parents are convinced that “the kids are all right.” Catholics who do not attend Mass don’t hear any voices speaking the Church’s truth even if they know what the truth is.

How widespread is the Church’s teaching in pastoral programs at the national, diocesan, and parish levels? What catechesis is done on the family?

Catechesis on the family is usually limited to discussions of the sacrament of marriage. Family activities are increasing, but there is still much separation of age groups (i.e. parents don’t usually learn right alongside their children, or even at the same time if not in the same place). National websites such as For Your Marriage are great but not widely accessed. I don’t know of any specific resources for families in the Diocese of Austin except the Counseling Services (through Catholic Charities).

To what extent—and what aspects in particular—is this teaching actually known, accepted, rejected, and/or criticized in areas outside the Church? What are the cultural factors which hinder the full reception of the Church’s teaching on the family?

Outside of the church, the definition of “family” has changed. It no longer centers around a married man and woman and their children, with or without extended relatives. It is believed that a free, total, faithful, and fruitful marriage is wishful thinking at best and impossible at worst. Marriage is no longer needed for sexual activity, shared home life, or raising children. Family can be whatever you define it to be, which makes the word carry little meaning. Marriage is no longer seen as something that should last a lifetime or is even able to last a lifetime. Children are seen as a nice addition to marriage, but not “too soon” and not more than two or three. Celebrities and other media figures don’t support the Church’s vision of marriage and family. Those who try to follow the Church are ridiculed, sometimes by their own friends or families. It is very difficult to be faithful to the Church’s vision of family even if you know what it is.

That’s it for the first section. What do you think? How do you know what the Church teaches about family? What parts of our culture make Catholic family life difficult? Pope Francis asked for your opinion, too!