This was quite a good weekend, not in the least because I really liked the outfit I wore yesterday. Let’s get straight to it. 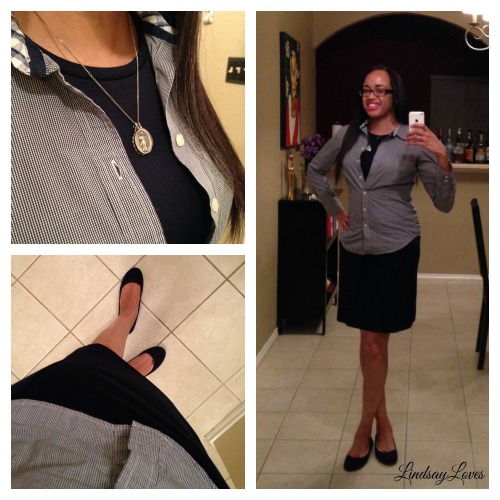 This sheath dress is one of my best purchases ever. I originally got it for my young adult group Christmas party last year. The infinity scarf I got to wear as a shawl was perfect. The dress was such a bargain that I felt that itch to wear it again, thus reducing the cost per wear. (I use that mental/wallet trick with more expensive items, too, but it’s still fun with the thrifty ones.)

I’ve worn almost this same outfit before. I couldn’t quite get a skinny belt into a comfortable position last time, though, so I left it off. As I learned from Verily’s excellent piece on dress shapes, the sheath dress is designed to be form-fitting. Trying to cinch an already-close shape is just asking for trouble. Instead, I layered. Sometimes this pattern starts to swim if I look at the teeny-tiny checks too closely, so I like to let a little bit of the dress peek through at the top. It also clarifies that this is a dress and not a skirt.

I was called up to substitute as a lector this week. At first, I hesitated to do it twice in a row. I even let the sub request go out a second time. Then I remembered how much I love lectoring and, being a single lady, how easy it is for me to pick up the assignment on short notice. I can change when to leave for church and where to sit pretty easily. I’m hoping that someday I will have someone to sit in that right-up-front pew with me, though. Someday.

It was also Catholic Services Appeal weekend. I was expecting a solid pitch, but I was not expecting it to go so well. I never like having videos displayed during Mass, especially when they are projected on the wall, but at least it was short and it did not replace the homily. (Little Gianna Whitaker is the baby being baptized in all the CSA materials!) I did, however, like that our pastor came to give the homily. He was in choir dress, which is the customary attire for priests (and up) who are present at Mass but not concelebrating. (I would have expected no less. Fr. Pastor’s got style.) He gave the homily I always want to hear on CSA Commitment Weekend: one that combines the readings, the appeal, and a practical application from both.

When I pre-read the first reading, the image that stuck with me was the temple as the place from which holiness flows. The second reading confesses that we are temples as well, and the Gospel reminds us to keep all temples holy. Fr. Pastor spoke about the importance of recognizing “the church” as a place that is larger than our individual parishes and the groups within it in which we are involved. We have a duty to support the larger church as well, particularly churches in the rest of our diocese. Many of us attend parishes that we did not help build (physically or ministerially), but we benefit from them every week. Most of us will not have priests or religious for our children, but we have a duty to foster vocations, teach our children to listen for God’s call, graciously help them follow those calls, and offer our prayers and financial support for the education and lifelong care of those who take vows. We all have a role to play, and some of that involves our checkbooks.

I’ve written my thoughts about learning to tithe before. I have been giving to the Catholic Services Appeal monthly since I worked at the UCC. (Technically, it’s a 10-month pledge.) The amount I give is based on my income, so it has changed from year to year. Even while I was unemployed last summer, I had to delay a few installments, but I resumed paying them once I found work. I was blessed to receive a raise at the end of last year, so I increased my pledge for the coming year based on my current, higher income. (Rule #1 of zero-based budgeting is not to promise money you don’t have.) I was glad to do it.

I do have one criticism. I’ve never thought it wise to ask people to fill out their pledge cards in the pews during Mass. That would require a significant period of downtime during the Mass, first of all. Couples who are financially healthy would probably need to talk about it. The most generous pledges will come from people who, like me, can actually examine their budgets. Many people prefer to donate via credit card to earn rewards, so they need to copy the information from their cards. Donating by bank account draft requires tearing out a blank check. None of those things ought to be happening in the pews during Mass. I took the opportunity to save a stamp and turn in my pledge card after Communion, but in general, I’d like to see a more refined process. Distribute pledge forms in the pews but collect them after Mass in the narthex, maybe, and provide tables and chairs? As a previous donor, I got mine in the mail. I know they sent pledge forms to all registered parishioners because both of my roommates got them, too. There just has to be a better way to get those on-the-spot pledges than filling out forms during Mass.

As our pastor said, the amount you give is not nearly as important as giving at all. Even $5 a month is more than zero. When your diocesan pledge comes around, give more than zero. God gives you everything.

I don’t know how I missed Verily’s dress shape post; thanks for sharing! You look great in the sheath!

Always happy so spread the knowledge. Thanks for the compliment as well! I’m convinced this dress is a little bit magical, Sisterhood of the Traveling Pants-style.