How I Became an Apostle of Prayer

In December 2014, I became an apostle. I’d thought about it before, but it was a while (years, actually) before I took the plunge. Now, I wouldn’t have it any other way.

I first discovered the Morning Offering when I was in college. My roommate and I slept in bunk beds before we got our own rooms. I have always been a top bunk kind of girl, so every morning, I would climb down the foot of our beds in the dark, like some kind of methodical monkey, to turn off my alarm. I purposely chose an annoying alarm on a real clock, and my roommate was a light sleeper, so I had plenty of motivation to get moving. Slumped in my desk chair after vanquishing the alarm, I turned on my desk lamp and squinted at two Post-its stuck to the edge of my desktop bookshelf.

O Jesus, through the Immaculate Heart of Mary, I offer you all of my prayers, works, joys, and sufferings of this day, in union with the Holy Sacrifice of the Mass throughout the world. I offer them for all the intentions of your Sacred Heart: the salvation of souls, reparation for sin, and the reunion of all Christians. I offer them for all the intentions of our bishops, all the Apostles of Prayer, and in particular for those recommended by our Holy Father this month.

The other had two bullet points: one general (now “universal”) intention and one mission (now “evangelization”) intention. I found them online. I mumbled my way through the prayers and intentions, still about 60% asleep, and eventually convinced myself to move on with getting ready for the day.

Fast-forward to my second year of teaching. I found myself re-learning that offering prayer and reciting it at the beginning of the day, every day. It was part of the morning announcements at my school. Our theology department chair was on point. It was then that I realized the “apostles of prayer” were actual people. I had been praying for their intentions. Furthermore, this was a group I could join. So why didn’t I?

Moving on again, we find me just this past December. I don’t know what led me back to the website of the Apostleship of Prayer in the U.S., but I got there, and I registered, and now it’s official. 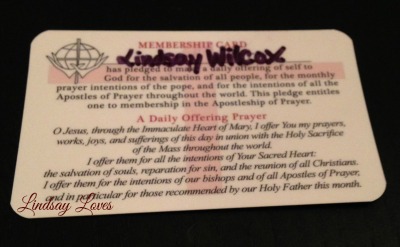 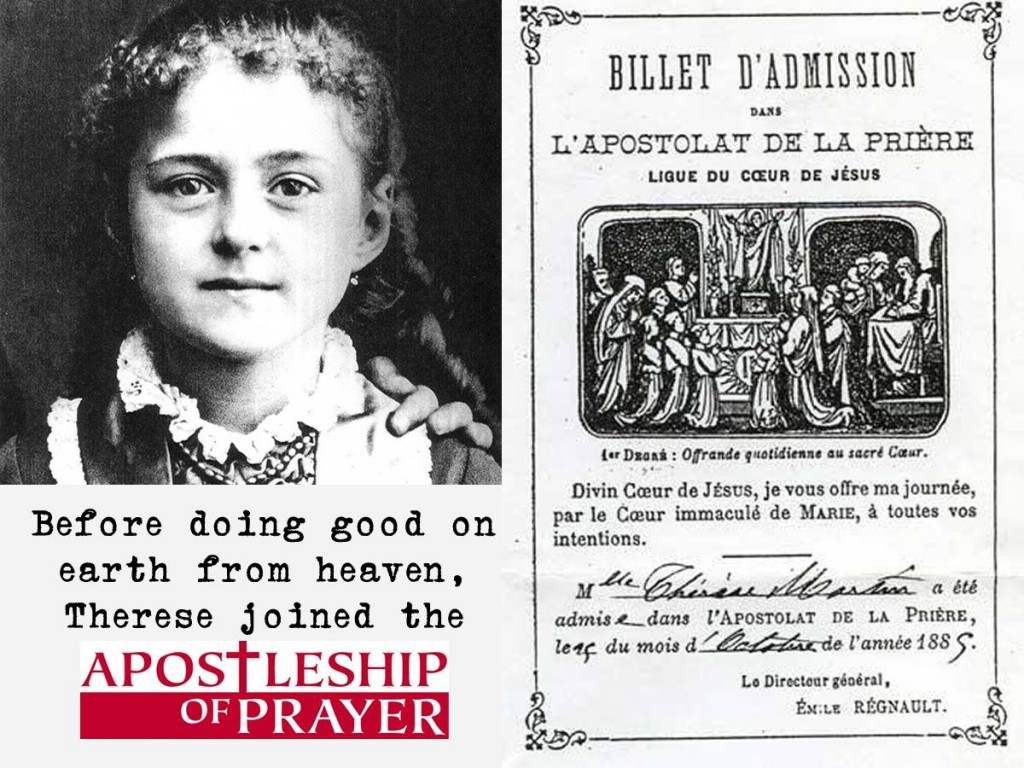 After I joined, I received a lovely booklet listing the pope’s intentions for the year. I keep it on top of my breviary, which I use nightly, so I see it all the time. I also get an email on the first day of the month reminding me of the new intentions and linking me to the reflections provided by the AOP staff.

It has been glorious.

A bit of history: The Apostleship of Prayer began in 1844 when Fr. Francis Gautrelet counseled his Jesuit students about how to console their missionary hearts. They wanted to evangelize in countries around the world, but they were stuck studying in heavily-Catholic France. By offering their whole day to God in union with the intentions of the Sacred Heart and Holy Father, they satisfied their desire to participate in the work of missionary evangelization even while buried under books in the library. The movement spread to 13 million members around the world in just forty years. Today, I am one of them.

The old international AOP website summarizes the purpose and benefits of joining. The Apostleship of Prayer:

Do you want to do that? Join the Apostleship of Prayer! It’s free, and you can enroll online anytime. You can also donate to support the work of the AOP, including ministry tools for children and young adults, new media evangelization, and Ignatian retreats held around the country.

The first and primary duty of an Apostle of Prayer, however, is to pray for the intentions of the pope. This duty is pope-neutral, i.e. it doesn’t matter who is pope at any particular moment. When he asks for prayer, you pray. Even before I became a member, I prayed (and fasted) for peace with Syria. Did the U.S. go to war with Syria? Nope! That’s a pretty solid result in my book. I’m still praying for the actual “peace” part.

Secondary duties are to promote devotion to the Sacred Heart of Jesus, promote the Holy Father’s intentions, and invite others to join the AOP. It is also recommended to go to Mass as often as possible and pray the rosary daily. I’m still working on that, but I think I’ve neatly fulfilled promotion and invitation right here.

The mission of the Apostleship of Prayer is to encourage Christians to make a daily offering of themselves to the Lord for the coming of God’s Kingdom and for the Holy Father’s monthly intentions. This habit of prayer encourages a Eucharistic spirituality of solidarity with the Body of Christ and loving service to others. Nourishing this spiritual program is the love of the Sacred Heart of Jesus. (source)

If you’ve ever thought about joining a prayer group with no meetings, one membership requirement, and universal and eternal effect, join the Apostleship of Prayer. I’d love to have you with me.

Lindsay! Our stories share so many similarities–right down to the part about loving grammar. Thank you for becoming an OFFICIAL Apostle of Prayer. I will think of you in a particular way when I pray my Morning Offering. Love this post!!!

Grammar is the best. It’s complicated, but in a good way. I’m glad so many people at AOP enjoyed my story!

I think you mentioned this on my morning routine blog post and I never went back to reply to the comment!

Your mentioning it previously and this blog post are the first times I’ve heard of the Apostleship of Prayer. The morning offering I got from EWTN doesn’t include the “Apostles of Prayer” part. I will have to consider it for the future…

You should! It really is as easy as making the Morning Offering. You probably shouldn’t feel too bad about missing it. I prayed for the Apostles of Prayer for years without realizing what I was doing. Now I’m all set. :)

Love your blog post! I enjoyed reading your testimony. I am also an Apostle of Prayer and I’m the secretary of a Catholic Church. I post the Pope’s Prayer Intentions every month in the parish bulletin. You’ve inspired me to continue this and now I also intend to encourage the parishioners to become Apostles too and give them information on how to do so. I’m also the parish webmaster so maybe even a link on our website would be a good idea. Thanks for sparking some good ideas!

Those sounds like fantastic ideas! The “barrier to entry” is so low that almost anyone can join. The AOP even has children’s versions of the Morning Offering (and reflections written to be truthful but delicate), so the whole family can join in!

From one evangelist to another, “Well done! You ARE Sheenazing!” And, yes, I have been promoting them for over a decade in Oregon, Washington, North Dakota, Hawaii, and now in Mexico…

For over a decade, the daily prayer intentions and offering is perhaps the most important minute of my day!

Hear, hear! It’s so easy to do so much spiritual good in the world!

[…] biggest win of the weekend was managing to sleep at all in the shakiest bed ever. As I mentioned in my AOP post, I am a top bunk girl, but I’ve never slept in any bunk that shakes wildly if I move at all. […]

[…] old-school in all aspects of my life. If you’re interested in my individual journey, you can read the post I wrote for my personal blog, “How I Became an Apostle of Prayer”. It went […]

[…] and general feedback like I used to. This week, I finally saw a few messages from people who read my viral Apostleship of Prayer post and expressed concern that I love both Jesus and Harry Potter, as declared in my […]

[…] on a regular basis. My daily reading from St. Augustine, Night Prayer, the Morning Offering for my membership in the Apostleship of the Prayer: they all help me grow in holiness. That’s the goal. That’s the one thing I know for […]

[…] am a card-carrying member of the Apostleship of Prayer. I also get the monthly e-newsletter with links to the reflections for each month. I don’t […]

[…] I say all of this not to brag, but to point out that I have customized my prayer life to my personality and my state in life. As we discussed last link-up, it’s not so much that single people have more time for prayer but that it can be shoved into our days basically wherever we want it. I don’t have a toddler wandering out of bed and into my room when I’m praying Night Prayer. I am a total GTD fan, so I stay on top of my email inbox and don’t let the daily Scripture readings pile up. For me, the Morning Offering is a joyful habit, not a burdensome obligation or membership requirement. […]