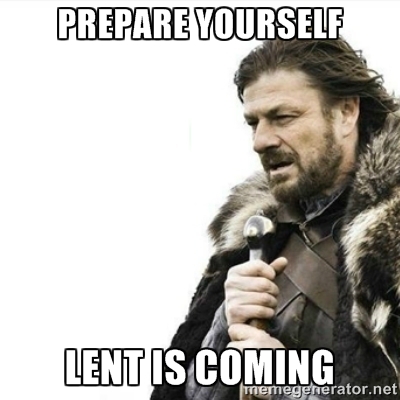 The hip thing to do this year is to remind everyone that Lent is coming. Now I’ve memed it, so it’s extra cool.

Check your Mass times now. Remember that Ash Wednesday is not a holy day of obligation, although it is good to go to Mass that day. (I like to call it a holy day of non-obligation. Also try to figure out how many daily reflection emails you signed up for and pare them down. (That last one might be a reminder just for me.)

My Ash Wednesday pet peeve: if you want ashes, get them in Mass, and do not leave early. Then you have to repent for leaving early. That’s not a good way to start the season. You’re supposed to repent of the sins you already committed, not work on new ones.

I have found it extremely helpful over these many years observing Lent to treat it less like a marathon and more like a restart to ordinary (or New Year’s) resolutions. Lent is not supposed to be an epic quest to sustain one sacrifice “from ashes to Easter.” It’s okay if you fail along the way or even change what you’re doing. Just don’t give up.

Thus, I suggest you test out your Lenten fasting, almsgiving, and/or prayer early. Today’s a good day. If you’re going to pray the Morning Offering every day, pray it right now. It might not be morning as you read this, but ever is better than never. By Wednesday, you’ll be well on your way to making it a habit to be practiced during Lent and for life… or you will have chosen something different.

Kendra’s post is the best I’ve ever seen for Lenten sacrifice suggestions. There has to be something on that list you can actually do and should probably be doing anyway. (The thought of leaving dirty dishes out overnight makes me shudder. Get flies once and you’ll never do it again.) Become a better person during Lent. 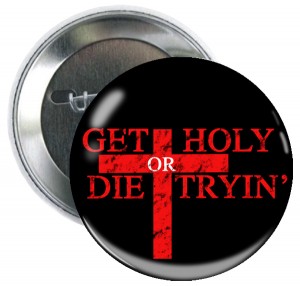 Word.
(Button and other items available from CatholicToTheMax.com.

So what am I doing for Lent? I’m not telling. I’ve been working on it for a long time, though, and I am tired of taking it to Confession, so this is it.

Additional pet peeve: When did it become cool to say, “Actually, instead of giving up something, you should take up something,” with a snooty voice and everything? This is a faith of both/and. You are not less holy if you give up chocolate. If you want to give up chocolate, do it, and don’t let anyone make you feel like it’s not good enough. Something is always better than nothing.

If you feel like giving up chocolate is not good enough, then pick something more challenging. But don’t be bullied into it.

I think it was actually that 66 Outside-the-Box Lenten Sacrifices post that made me realize I should probably be reading Kendra’s blog regularly. I admire the ladies of the Catholic blogosphere who can keep it real, preach the Truth, and be effortlessly humorous.

So I saw her Harry Potter post. Yes, please! I knew she was a fan, as are her oldest two kids, and I’m pretty sure she’s written a Harry Potter apologia before, but I think her recent post about why Catholics and other Christians can still love Harry Potter despite all the magic is marvelous.

I think her defense is spot-on. Christians love supernatural powers—the ones that come from God (e.g. answers to prayer, miraculous healings, raising the dead, and salvation). Not everything supernatural is bad. Kendra did a great job partly because she’s a great writer but also because “all magic is evil, thus Harry Potter is evil” is a specific topic to discuss. She paid attention on Thesis Statement Day in English class; I can tell.

I got to hold three babies on Sunday. It was glorious! Here is a photo of me with Joseph. I am looking at the camera enough for both of us. 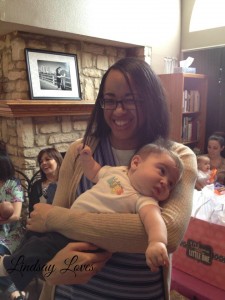 So much cuddling. I also have enough joy for both of us.

I got baby photobombed by the other two tiny humans. Kat is on the right, and the very top of Lily’s head is on the left.

I think I might have seen an improv show when I was in college. I was definitely into seeing a cappella groups. Regardless of whether it was my first improv show ever, I went to see my friend Katie’s current show on Saturday at the Hideout Theatre. It’s called Wanderlust, so every show is about travel. She was one of the featured performers in the story of old college buddies road-tripping from the Midwest to Disney World. I was impressed with their ability to build the story as they went and to portray so many emotions.

If you’re in town, I recommend it. Katie won’t be featured anymore, but the show runs through February.

I also went to confession on Saturday. I only had to wait about 30 minutes instead of the usual hour. Small victories!

Your linking to Kendra’s blog has had me over there for hours at this point, binge-reading her entries. I do know you just posted this Friday and I just read it yesterday. I have her blog up on my phone and I’ve been scrolling backwards. I greatly enjoyed the HP one and it was a great starting point.

Oh, I forgot to say that the picture of you holding your friend’s baby is adorable :)

Kendra is awesome, and her archives are, in fact, addicting. I pay close attention to everything she says about having kids because she has so many of them! She always underscores her advice with the caveat that it all fits her life, but it might not fit anyone else’s life. (And thank you for the photo compliment.)

And he’s even cuter now! Must be solid genes from mama and daddy.