What I Wore Sunday: Triduum Three-fer!

Well, that was an interesting Triduum! This was my second year attending the Big Three liturgies (Holy Thursday, Good Friday, and Easter Vigil) at my parish, but the first year with Fr. New Pastor. In retrospect, I probably should have asked my friends who still attend Fr. New Pastor’s old parish (he was there for a long time) what to expect, but learning on the job works, too.

I’ll take my recap one day at a time. Long post ahead. 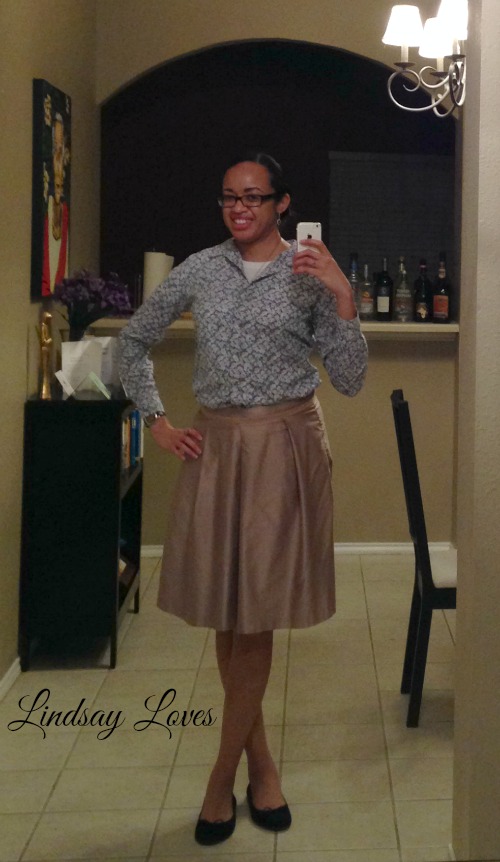 I was so tired I forgot to take any shoe shots!

This is my Holy Thursday skirt. The liturgical color of the day is white; gold is liturgically white, so it fits. I usually wear this with a white cap-sleeve blouse, but that was ruined in the wash several months ago, so I had to adjust for this year. I only remembered that on about Tuesday, though, so I had to improvise. This blouse is blue and has tiny flowers on it. Yes, the sleeves are too short. #tallgirlproblems The shoes are navy blue.

Last year, I had such a tough time eating before Mass, going home after work to change, and getting back to mid-town for Mass that I tried a new tactic this year. I wore this whole outfit to work; this generated many (positive) comments because I have never worn it to work before in over a year. It’s a bit fancy for my construction office. I had a large snack as my workday winded down, and then I got to the church early enough to make a few phone calls while I sat in the parking lot.

Fr. New Pastor threw me for a loop. He decided to have everyone in the church wash one another’s feet. I have seen that done exactly one place before: where I used to work here in Austin. I tried it the first time and then politely declined to participate all the other years. I dislike it for 3 reasons:

In his homily before the foot-washing melee, Fr. New Pastor said he didn’t know why the Eucharist became a sacrament when foot-washing didn’t. He suggested that the twelve men (note: I have never actually seen just men, and all twelve apostles were men besides) selected in most parishes to have one foot washed (because it’s a symbolic washing, like he was soon to do with his own hands) are chosen for their financial contributions (maybe that’s how worked in his old parish; I’ve always seen ministry leaders up there, or been one of them). I don’t know exactly why the sacraments are what they are, but since all three synoptic Gospels include the institution of the Eucharist, yet none of those evangelists mention foot-washing at all, that seems like solid evidence for one being a sacrament and the other being just a symbol.

As you might conclude, I was not happy after that Mass. I might need to attend Holy Thursday Mass at another parish in the future.

After the surprise of Holy Thursday, I was more prepared for Good Friday. I remembered to wear comfy shoes! 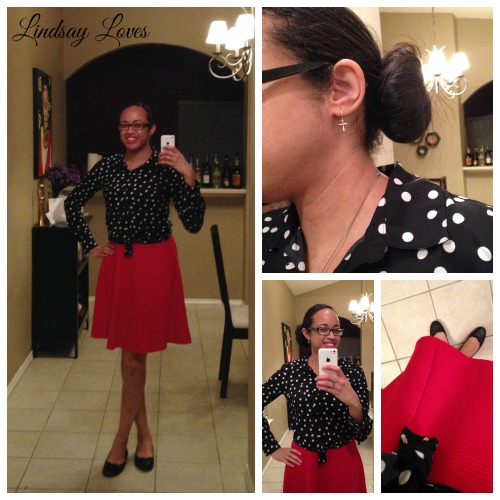 I don’t have a standard Good Friday outfit. I tend to aim for red and black: red for the liturgical color and black for the funeral-like character of the liturgy. I got the dress for my former roommate’s wedding. It is strapless. I have been looking for good opportunities to (a) wear this dress again, (b) wear a dress as a skirt, and (c) knot a top, so this seemed ideal. I love the look and hope to try it again with other pieces.

Fr. New Pastor’s Good Friday liturgy also lasted an hour and forty-five minutes. I didn’t have anywhere to go after, so that was less upsetting. He composed a chanted Passion Gospel that was actually quite lovely (although very long). I noticed that we did not kneel at any point. Maybe he forgot to write that in.

His homily again sounded more like the airing of his own grievances than advice for our spiritual edification. Why, he asked, did “God kill Jesus” when he didn’t let Abraham kill Isaac? First of all, God didn’t kill anybody. He doesn’t kill people. He never wanted us to die. Death was/is the consequence of our freely-chosen sin. I suppose atonement for original sin could have come about another way, but since the consequence for sin was/is death, it seems logical to me that the only way to satisfy that would be through the perfect obedience and undeserved death of the one without sin. None of that really belongs in a homily immediately after you’ve been meditating on the actual atonement that actually did win our salvation, though. I found it kind of offensive.

Nothing was going to ruin my vigil. I never look at my watch during Mass; I am always in it for the long haul. As it was, Fr. New Pastor only tied the longest Mass I have ever attended (three hours). My outfit held up nicely. 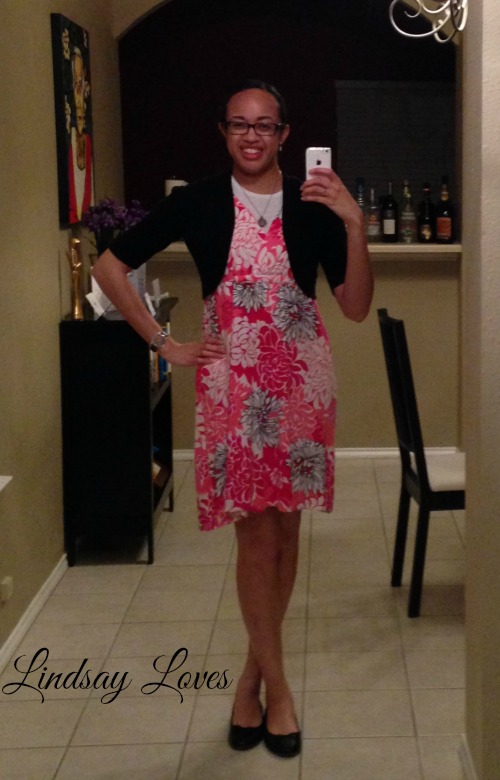 I remembered the shoe shot; I just didn’t think it added anything. I was too tired to straighten any of my lines.

I had a lot to do on Saturday. Unlike the apostles, I do not rest on Saturdays. I had to do my laundry, go grocery shopping, eat so I wouldn’t be ravenous through Mass and could recover from fasting on Friday, and get to church early for parking and a temporary seat. I just brought this dress in from winter storage. It didn’t need much ironing, and it seemed festive and fancy enough, so I ran with it.

Mass was full of surprises: some I liked, and some I didn’t like.

Every time I was tempted to uncharitable thoughts about the woman next to me clearly texting and looking up Google Maps info or the random parts of the liturgy that seem more like “the pastor’s reasons” than “pastoral reasons,” I reminded myself that I don’t go to Mass for anything except Jesus. I can’t find the Eucharist anywhere else. For him, I will keep going, and in him and his universal church, I will keep faith.

Ooh that Holy Thursday outfit is my favorite! Great combination :)

And the footwashing… Ugh. HATE it when they have everybody do it! I’ve seen it done a lot of different ways, and I think my favorite is when the priest washes twelve altar boys’ feet. Way better symbolism there!

Thanks! Altar boy foot-washing sounds nice. It’s not too long ago that serving at the altar was a great way to foster vocations.

I’ve never seen the “everyone washes everyone else” feet thing. And I’m glad I haven’t. :)

You are blessed to have missed out! :)

[…] is the same outfit I wore for Good Friday. The black was intentional then, but it was only incidental for Pentecost. This happens to be the […]

[…] worn this dress as a skirt twice before with another blouse (same blouse, two times), but this is the first time I’ve […]