7 Quick Takes on the Random Things that Catch My Attention

Once again, I return after a long absence from giving you any Quick Takes. My June tl;dr was a pretty solid summary of what’s been going in my personal life, so today I will share all the nifty things I’ve stumbled across around the Internet that didn’t seem quite right to share on Facebook or Twitter.

What, you don’t have a strategy for deciding what to share where? You can’t be surprised that I do!

I checked my credit report again last month. I use the free credit report service provided by the federal government and request mine from one credit reporting agency every four months. There were no bad surprises, thankfully. The one surprise was that my report showed me as an authorized user for something I had totally forgotten about.

When I was in high school and started driving myself to school every day, my mom gave me a gas station-branded credit card for gas. My parents were paying for all my car-related expenses, and I usually went to a specific conveniently-located station of that brand to get gas. That saved them the trouble of giving me cash all the time, I could pay at the pump, and I didn’t have the free rein of a regular credit card.

Somehow, I didn’t realize that although the card was in my mom’s name, she had officially listed me as an authorized user. I never used it in a “signature required” situation, so I don’t even remember if it had my name printed on it or hers! Regardless, that usage became part of my credit history. It’s the oldest item on my credit report. It will probably fall off in just a couple of years, but it was a surprising reminder that the credit reporting industry (like the Internet) never forgets.

I’ve mentioned that I’ve been listening to podcasts on my long commute to work. (I pray the rosary on the way home.) One of the first standard podcasts I subscribed to was Grammar Girl’s Quick and Dirty Tips for Better Writing. I’ve been following Mignon Fogarty, a.k.a Grammar Girl, since before the Quick and Dirty Tips network even existed, but my following was exclusively limited to computer screens. I’ve been subscribed to her email list for years and years, so when I took up podcast listening, adding hers was a no-brainer.

Then I actually started listening, and wow! The experience was so different! I unsubscribed a few weeks ago for a very specific reason: grammar is incredibly difficult to convey audibly. For example, one of the most popular Grammar Girl tips is about the difference between “affect” and “effect.”

Did you try to pronounce those words differently, even just in your head? You’re wrong. They both properly start with a “uh” sound, and no amount of forcing will change that. They are, however, spelled and used in very different ways. That is almost impossible to convey when you’re speaking aloud to an audience that is only listening, not looking. Sounds like a podcast audience to me.

As I listened to Mignon spelling words to try to differentiate them, I got terribly confused. The episode breaking down “The House that Jack Built” was my tipping point. That thing is hard enough to process when you can see it. My head was spinning when I tried to listen to it.

Therefore, I am no longer following the Grammar Girl podcast. I am, however, still subscribed to the newsletter, and I will be as long as there is one to read. You should sign up, too.

You’re welcome. When I saw that, I laughed so hard I started hyperventilating.

I have been overhauling my physical files as I fully commit to GTD. In a sudden burst of inspiration on Memorial Day, I sifted through a box full of files and papers from my old job. Leaving was tough, so I shoved everything in a box when I moved into my current house and had never looked at any of it since. Now, I am in a much better place (and in a de-cluttering mood), so it was time.

One of the items I purged was the student binder from the Frank J. Lewis Institute back in June 2011. I re-read all my notes looking for anything worth saving or anything that caught my eye. Most of it was only relevant to campus ministry. I kept a few info-packed pages. I mostly take notes to focus myself while listening to a lecture or presentation, not for later review. (Perks of taking a class where there’s no test. Except life, I guess. Life is kind of a test.)

A note that stuck out to me was “evangelization as Magdalenic succession.” Catholics are (or at least ought to be) familiar with apostolic succession. Jesus chose Peter as the leader of the apostles. When St. Peter died, the Bishop of Rome, St. Linus, took over. The line has continued in an unbroken pattern for two thousand years, some craziness with the Avignon papacy and some normalcy in the current conclave-style election of popes notwithstanding. Thus, we consider the pope and his actions in elaborating on doctrine to be an act of apostolic authority.

Mary Magdalene wasn’t an apostle per se, and it’s unclear whether she was a prostitute, but she was definitely an evangelist. She is sometimes called “the apostle to the Apostles.” When we spread the message that Jesus has risen, as she did that Easter morning, we are following in her footsteps. In a way, the work of evangelization continues through Magdalenic succession in the same way the work of salvation continues through apostolic succession.

Wrap your heads around that one!

I am pretty satisfied with my current note-taking system, but Patrick Rhone’s Dash/Plus system sounds like a great one if you’re on the market. (What, you don’t have a note-taking system, either?) I love that it’s easy to use, the symbols are fairly intuitive, and it looks neat since everything goes on top of the original dash and everyone can draw a dash.

I also like that it lends itself to simple adaptations. I would probably swap the symbols for “waiting” and “moved” because, to me, an arrow means I should look that way to find the item: on the next page, in a different list, and so on. A circle means “don’t forget about this,” i.e. because I’m still waiting for it. I also kind of want to turn the delegated arrow into a bent upward arrow, as in “I’ve passed this up (or down) to someone.” A light bulb is too hard to draw quickly, so I like James Gowans’s suggestion to use a lightning bolt for ideas.

I’m never going to take on a system that doesn’t encourage neatness. I only like my GTD-style physical inbox because, despite being a pile of papers, receipts, and currently a book (the GTD book, actually), it corrals all that stuff into one place. It’s isolated clutter. I can handle that.

Several months ago, at our quarterly company meeting, the presenter spoke about social interaction styles. Her main presentation topic was making presentations (so meta), specifically for construction project proposals, but none of that stuck with me. What did was that there is apparently an origin for the term “flipping out,” as in “losing your cool and reacting in an atypical way.”

She led into “flipping out” by asking us to identify ourselves on an X-Y axis, where positive X is “tells” and negative X is “asks. Positive Y is “controls” and negative Y is “emotes.” Here is a diagram, because that was hard for me to even try to write. 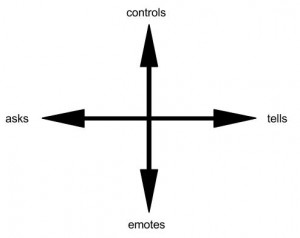 There were no surprises in how I fell on those axes. The surprise was that “flipping out” stems from the tendency of people to behave in the manner that is exactly the opposite of their normal behavior when they are under extreme stress. You “flip” to the opposite quadrant.

I can absolutely see this. Most of the time, I fall in quadrant 1: high assertiveness, low responsiveness. I like to get things done (see Quick Takes 5 and 6) and, if I’m not mindful, I get way too task-focused and not people-focused enough. I try to be mindful of that. But when I am experiencing the most stress, I am the complete opposite. I “flip out” from behavior that is action-oriented and independent. I back down and go along with whatever other people want, as long as it gets them off my back. I get quieter and less efficient. None of that is good when it comes from me.

Check out this explanation of the scales and see if your “flipped out” behavior fits what’s listed there. There are a million personality tests, but how many of them identify your stressed-out personality?

[…] turn my usual action-oriented personality way up. I just Get Stuff Done. My second instinct is to flip out and keep my head down, to stay docile and quiet. That first instinct got me pretty far. I even […]