What I Wore Sunday: Accidentally Preppy

I missed having long weekends when I was in ministry. Working on Sundays will do that. Now, I cherish them much more, but they still seem too short. Let’s hope we can all hang on through those five-day weeks until September! In the meantime, I decided to go all-out with the summer clothes for church yesterday. 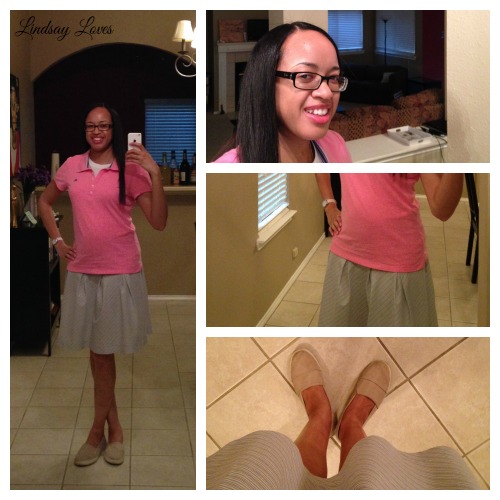 It felt like a light-colored skirt sort of day, so I went with that feeling. I had also finally, finally managed to get ready on schedule, so I had plenty of time to consider my wardrobe instead of grabbing the first workable items. This skirt is super old, so it is greatly faded. It started out as a much brighter blue and green. I love the way it fits, though, so I can’t let it go. It’s just the right length for church, and it is fitted around the hips before it flares out with those nice pleats. I usually wear tops that hit around my hips to help balance out the width, so the skirt works well with almost every shirt I own.

I don’t know if I’ve ever actually worn these shoes to church before. They’re really comfortable. I originally got them to go with my Hipster Pocahontas costume, but I’ve been surprised at how well the neutral color and casual cut goes with other things I wear. As I was headed out the door, I realized how accidentally preppy I looked… but that makes sense. I buy most of my clothes at Old Navy already.

I haven’t been paying quite as much attention, but I think Fr. Pastor has been celebrating our Sunday evening Mass more often. It feels like it. At any rate, he did this week, and I greatly enjoyed his homily. I love any homily that connects the non-Psalm readings into a single theme. They’re designed that way. (I almost faint when I hear the homilist reference the Psalm, too!)

He also worked in reminders that the Catholic Church has been sticking to the story about the sanctity of all human life and the truth of marriage even as the rest of the world has incrementally changed its story. Neither of our pastors has been direct, but I’m wise enough to pick up on their indirectness, and I like and appreciate it. Giving a homily can’t be easy. It must be trickier still to balance Scriptural explication, practical applications, and timeliness. Bravo, pastors. Bravo.

I don’t blame you for holding on to that skirt – it’s darling!! You look beautiful as always!

Thanks! I only wish my laundry detergent would get the memo and stop stealing the color in the wash. ;)

[…] reached the point in the season where I am tired of everything I own. I switched to summer clothes later than usual this year, but I get that feeling every year. I’m glad I was able to resolve “I have nothing to […]

[…] what fall is supposed to feel like meteorologically. Even back home, we had Indian summers. We slid into summer really slowly, so I guess it makes sense that we’d approach fall the same way: slowly, then all at once. I […]