Faith, Consumerism, and More (Review: “The Year Without a Purchase”)

Minimalist stories don’t usually contain much God-talk. Some have hints of spirituality in their suggestions that you can declutter your soul, make time for what’s important, and find peace in a life that’s not so full of stuff. On the flip side, there is plenty of writing about how to grow in your spiritual life. Not many stories combine the two. The Year Without a Purchase: One Family’s Quest to Stop Shopping and Start Connecting takes a stab at it. Scott Dannemiller describes the year he spent trying to get back to basics and the humorous journey of those tricky twelve months.

The family’s backstory is particularly intriguing. Scott and his wife, Gabby, had been married and both working full-time for several years when they started to feel that existential pull telling them that life isn’t about dying with the most toys. They received a call (spiritual and literal) to spend a year living in Guatemala, serving in a ministry of presence with a poor community. Rather than building a school or digging a well, they mostly just spent time among the people and engaged in the sharing of lives. They had very few possessions, little clothing, no computers, simple food, and only one bath per week. It was transformative. 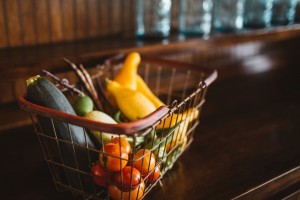 This basket of veggies was okay to purchase. A fancier basket to store them in: not okay.
(Public domain image from bossfight.co)

But the transformation didn’t stick. They returned to the U.S., had a couple of kids, and resumed their lives as consumers. When that pull started pulling again, they couldn’t pack up and leave the country for a year, so they decided to try going a whole year without buying anything.