Although I have not been up to much besides the mad dash before Christmas, I had a bunch of fun things to share stored up from the weeks I skipped in October and November. Score another point for GTD.

Speaking of GTD, I finally published a second installment of my GTD “series,” this time on how I organize my Next Actions. I also published some key terms for GTD and for Wunderlist, with a dash of commentary for pizzazz.

I went swing dancing at the Fed for the first time on Thursday. I stayed out too late (even though the party was still going when I left), but I had a great time. I learned a little East Coast (triple-step) Swing to go with my growing knowledge of West Coast Swing and my Jitterbug (single-step swing). As we rotated between partners, I could tell that I was getting it, or at least that I seemed like I was getting it. My leaders who were not actually first-timers kept testing out my skills randomly. I managed not to step on or kick anybody, so that worked out.

After the intro lesson, I went over to the West Coast side room. (A side room is a smaller room with a different style of music and dancing than the main ballroom.) That’s why I went to the Fed in the first place. I took this month off from classes, but I didn’t want to get too rusty, and since I didn’t have class, I was available for 3rd Thursday Westie night. The first few sugar pushes felt weird, but then I found my groove again.

For better or for worse, I was mostly surrounded by people who dance less like I do and more like this:

I’m better than when I started, but I don’t have half as much style as that!

I’m not in dance class this month, but back in October, I got the most wonderful compliment in class from a fellow student.

My general strategy for trying things you’re unsure about is to just believe you can do it. I have psyched myself out of things before. There’s a reason athletes visualize completing passes and making goals and all that. I think you can psych yourself into things, too.

So, when I rotated around to one particular leader (who I like because he’s taller than I am), I was stunned when he complimented me out of the blue for sharing that exact concept. When we’re working on something new and I rotate to a new leader, I usually ask, “How you feelin’?” It’s a more constructive version of “hello,” and it builds camaraderie when no one is getting the pattern we’re practicing. Back in my first month on Level 3, he was not confident one week, and I told him to just believe he could do it. All those weeks later, he took the time to tell me that he’d taken my advice and started believing in himself. I was flattered, and now I know that it’s not just my head that works that way.

My company started using new accounting software a few months ago. In training, we had to do a lot of that awkward thing where you describe where you want someone to click, because our trainer was on a computer, but we peons weren’t. At some point, I used the term “radio button,” which confused everyone. Not everyone can handle my vocab skills.

Radio buttons are these guys: 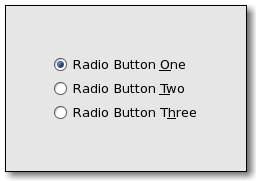 They’re called that because they work like buttons on a radio. When you click/tap/press a radio button, it stays selected. If there is a set of 2 or more radio buttons, you can usually only click one at a time. You’ve seen them in online surveys that have questions like “select one of the following,” because the radio button forces you to select one and only one.

The funny thing is that our IT guy, who was in that training session, wasn’t familiar with “radio” button, so he heard radial. Like a tire. Which is also round, I guess. He keeps saying it now, and I don’t have the heart to correct him.

One quick GTD tip: how to capture while driving.

I have a long commute, so it’s not uncommon for me to think of something I need to do or buy while I’m driving to and from work. I have a holster for my phone in my car, so it’s within safe and easy reach. I do almost all of my capturing on my phone, but I can’t write while driving. It takes too much time and looking and tapping to unlock my phone, launch Wunderlist, open a new task, tap to start dictation, and capture the task. So I was stuck.

I can, however, use Siri while driving with relative ease. Siri doesn’t connect to Wunderlist, though. My solution is to use Reminders with Siri and process the tasks later. As long as I tell Siri to remind me at 9 to (fill in task or item), it works fine. The item is out of my brain, I’m still driving safely, and at 9, the reminder pops up so I can get it organized properly. Done and done.

Goodreads has offered me my year in books report already! I feel a little shorted since I actually have more time to read now than any other point in the year, but it’s fun to see the statistics laid out like that.

In answer to your question (on that other site) about whether I read Bp Olmstead’s exhortation: I heavily skimmed it, which is as close to reading as you can expect in the 21st Century ;) And I skimmed it like three times. I still don’t get the war metaphor.

Olmstead is calling for people (men) to reform their lives and practices. He is much more John the Baptist preaching repentance than Henry V rallying troops to jump into the breach. We’ve always needed and always will need the John the Baptist repentance message. It’s a personal message to each of us about ourselves, not a call to war. Olmstead has not defined or articulated a war and neither have the many others who call for guys to “man up” and fight. Yes, we need to “man up” and take responsibility and be mature, but the war rhetoric is unproductive.

Related is how so many people speak of a culture war, which is imaginary. There is no culture war. There are many problems in the world, many challenges to go after. I wish people would focus on those, not rail about a non-existent war.

Being a reviewer helps, even after I slowed down my pace to 1 book per month instead of 2.

I can tell you’re not a fan of the war/battle metaphor. It’s worth noting that it’s not unique to men’s spirituality. St. Michael defends us all “in battle.” In Scripture, God commands the Israelites to destroy entire nations as a metaphor for banishing anything in our lives that might cause us to sin. Haven’t you ever even thought about “fighting” against sin?

There might not be a culture war, but you get to pick you own battles. Let everyone else pick theirs, too.

I miss West Coast Swing and place a great value in being exposed to a wide variety of dancing. Since moving I’ve stuck to my favorite, Cuban salsa, but I feel the need to branch out again.

I like variety in dance, too. I’m definitely in the school of thought that exposure to more dances makes you a better dancer. In my experience, the techniques transfer from dance to dance really well!