Not Alone Series: Theology of the (Unmarried) Body 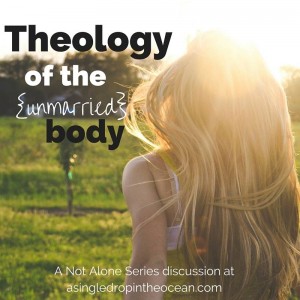 We hear a lot about the theology of the body (TOB) in Catholic circles, and it’s awesome. But some people are disillusioned by it because it’s usually talked about in relation to marriage. There’s a lot we can draw from TOB: the concept of giving of ourselves, serving others, spousal meaning of the body, etc. How do you live that out as an unmarried person? Or, if you haven’t thought about how to live it out before, how can we start? Have you read any books on it?

We’re linking up with Laura of A Drop in the Ocean this week! She designed that featured image herself.

On to the topic. Agreed: TOB is awesome. I’m one of those people who said, “Why didn’t anyone tell me about this before?” So far, my TOB studies have been heavily Christopher West-based (like most people), but I’ve also branched out a little:

Jason Evert was my gateway to TOB, but TOB for Tots is my newest love. I got them for a friend’s sweet son for his first birthday, but I want a set for myself, too! I don’t even need to have any kids of my own to read them to. I could barely flip through them without crying for joy. They’re so precious! I firmly believe that TOB is the backbone of chastity education, which begins with preschoolers. It starts out as simply as “when someone feels sad, you can give them a hug to show them you love them” and “we don’t run through the house naked after someone lifts us out of the bathtub.” You can save the nuptial meaning of the body and the personalistic norm for later.

You will notice the glaring absence of anything actually written by St. John Paul II, the often imitated but never duplicated originator of TOB. I’ve read The Jeweler’s Shop, but that seemed more poetic than theological. The omission of the actual TOB book is only somewhat intentional. I know it will take a lot of focus and effort to get through even Love and Responsibility, and I know I don’t have that right now. I might not ever.

Further agreed: living out TOB is generally considered a thing that married people do. However, among the nice things about Catholicism is that there’s a place for unmarried people. It’s an honored place. When it’s too highly honored, you wind up dabbling in clericalism, but when it’s properly honored, you get an appropriate respect for celibacy. There’s not really a category for people who don’t take vows of celibacy, but that’s part of a larger social problem, I think.

Living out TOB as a single person lies in the aspects of self-gift and sefless love. Yes, the gift of one’s whole self to another who is giving the same back to you, fertility and all, is as close as you can get to the creative and infinitely self-sacrificing power of God without actually being God. We’re on the same page there. However, the call of singles is to give to everyone, to love everyone with disinterest (as in “not selfishly,” not as in “not interested”), and to promote the same.

I don’t have a husband or kids. That leaves me with the freedom to figure out how I will make my life fruitful. How can I make the world better because I am here and because I can love? (It’s right in the name of my blog!) The same is true for married couples without children. How can they become better together than apart? Vowed religious have the added challenge of being committed for life to a whole bunch of people they didn’t choose who aren’t going anywhere. How can they serve their communities, especially the community members they don’t particularly like?

So yes, TOB is about marriage. But it’s also about love and gift, and those are for everyone, even the unmarried.

We’re linking up with one of our co-founders, Jen from Jumping in Puddles!

Being single can leave us feeling unworthy and unlovable sometimes, but we know that it’s not true! How do you avoid negative self-talk? How do you lift yourself up instead allowing yourself be down? How can we continue to acknowledge our low-points, but encourage each other to something more?

Link up with Laura at A Drop in the Ocean!

You know, Joe Geisler used to have a podcast. It’s a lot of work, but you might think about doing one in the future. (People seem to burn out of podcasting the way they burn out of blogging, but you are one of the rare people who continue blogging year after year.) A couple posts ago you mentioned podcast and the way I figure it, the best way to get on a podcast is to host one.

I think the main reason I’ve kept blogging is that I consider it a public extension of my natural inclination to journal. I’ve kept a journal of some sort since I was in the 7th grade. I’m in a season of “no” right now, though (which I plan to make one of my 7QT next round), and I’m not willing to invest in the kind of equipment you need for a decent podcast. I do love listening to them!

Yay, thank for linking up Lindsay! And oh my goodness. I am just loving those books for toddlers. What a beautiful idea! I’ve never heard of them before. Are they all good? Do you have a favorite to gift people with, or do you do all three?

I’ve never touched the original TOB text, but hope to in the future. I’ve been slowly making my way through Love & Responsibility which is beautiful, but quite dense (can only do a few pages at a time). But oh my goodness are his words amazing – much more than Christopher West! CW has been a great introduction for so many people (including myself). Loving the variety of where you’ve learned about this…will have to check some of those out. Thanks for participating!!

My favorite is Every Body Is Smart: God Helps Me Listen and Choose. If you order online (which I did), they only come as a set, but if you find them in a store, I would recommend that one first. They’re all adorable, though. My tiny friend’s mommy just sent me a photo today of him enjoying one with his dad!

I didn’t realize how much TOB reading I’d done until I started making that list! I had to crawl my way through Orthodoxy, so I can see myself taking L&R at a snail’s pace, too.