Sunday Style: Back to Winter, Sort Of

This was the week that I realized it’s not getting any cooler here. It’s been storming and sprinkling on and off for a few weeks. (Is that what regular springs are like? I’ve been here a long time.) It was definitely raining for about 20 minutes midday yesterday, but it was bright and sunny when I left for church in the evening. The warmth persists, though, so it’s probably time to switch to summer clothes. Here’s what I wore this week: 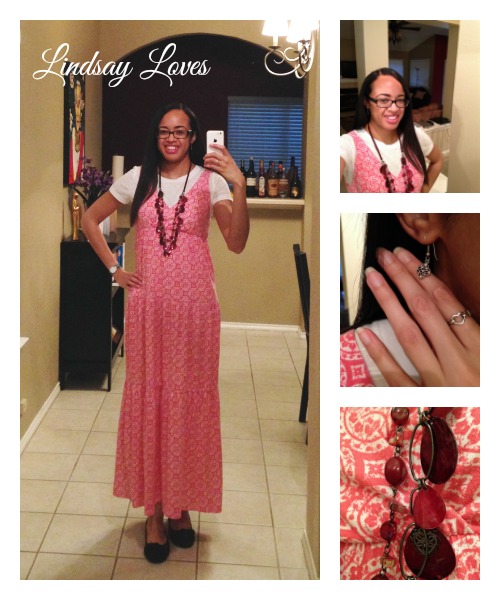 Dress and shirt: Target
Necklace: gift from a friend
Earrings: Maryland Renaissance Festival back when I was in high school
Ring: craft fair in Germany
Shoes: Payless

This outfit is also known as “I’m Supposed to Be Walking Out the Door in Two Minutes?!” True story. I made it in five. Because we had such a mild winter, the last time I wore this dress was in February. It’s a good standby for days like yesterday when I need to finish getting dressed very quickly.

Fr. AP’s homily was pretty solid until the end. He didn’t even go near attempting to explain the Trinity, hooray! We believe in a God we can’t see; not everything needs explaining. He started by pointing out that among the first prayers we teach children is the Sign of the Cross. (During my one year of childhood religious education, I remember the smart-aleck little boys in my class claiming it was their favorite prayer because it’s so short.) However, he finds that many of the children he sees for Confession appear to not know it. He has to direct them to make the Sign of the Cross when he greets them and while he’s giving them absolution. This is adorable and sad. (That last part is my commentary, obviously.)

He also noted that, for adults, we too often ignore the significance of the Sign of the Cross. I was never one to forget it entirely, but I used to rush through it. Then I was convicted to actually say (or at least think) the words every time. Several years later, I was also admonished to stop essentially using my middle finger to make the Sign of the Cross. We’re supposed to be using our whole hand; there’s a whole East/West theological thing there. Thanks for whipping us into shape, Fr. Charlie.

We had a weird pop quiz toward the end of the homily. I thought it was a “who would dare stand up and speak?” kind of challenge, but then Fr. AP seemed to be legitimately looking for an answer. I didn’t have one, and by that point, I had forgotten the question. Then he said he wouldn’t give us the answer, so I had even less incentive to remember the question, let alone to figure out the question.

We sang all the standard trinitarian songs, and we even did all the verses. If only we did that every time we get one verse per person of the Trinity! I was in a pretty good mood until announcement time. Due to not leaving Mass early, we had to sit through two painfully long announcements (about the flooding in Sri Lanka and a plea for catechists) plus a very long blessing for our departing youth ministers. We got out twenty minutes late, which is long enough to have celebrated an entire daily Mass. Not fun. I hope we got some souls out of purgatory for staying.

Also check out What I Wore Sunday at Fine Linen and Purple (back in action again!) 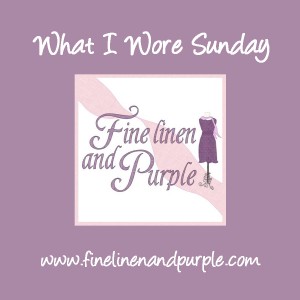 My kids really, really like singing liturgically-appropriate hymns for their bedtime songs, so we’ve been racking our brains (and just giving up and doing google searches) for the right hymns for Trinity Sunday! And now that I finally remember the ones they like, I have to figure out some Corpus Christi hymns they’ll want to sing… Easter was easier :P And I’m a jerk and only let them have 1 verse, because otherwise they’d choose the longest possible song to stall bedtime! I do like doing all the verses at Mass, though – we only ever get to do 2, 3 if we’re lucky :(

That is adorable! Stalling bedtime by requesting hymns with more verses sounds like the most Catholic kid thing ever. Although I was baptized Catholic as a baby and didn’t become anything else, I never say that I was raised Catholic because those kinds of experiences are completely unfamiliar to me. God willing, I’ll be able to give my own children the experience I never had.