My week got away from me! I had this post written last week, but I didn’t get to share it until today for a reason that will become clear in my next post. I’ve left all the time references in for expedience in publishing.

I only switched around my seasonal wardrobes yesterday, so I was stuck with the winter + transitional pieces this past Sunday. I was so happy to see the things I’d tucked away when it got cold that I wore one of my warm-weather skirts to work today!

But here’s what I came up with for Sunday: 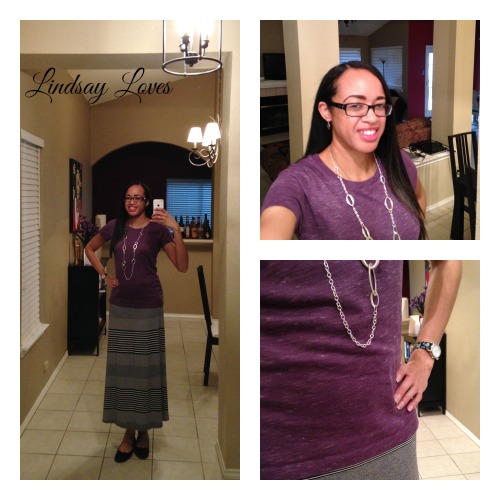 Our dryer is broken. The original plan was to do one week’s worth of laundry on Saturday so that I wouldn’t be left short after I am out of town this Saturday (on my usual laundry day). That plan failed, but it did mean that the dryer broke after just one load had been washed, and it was a smaller load than usual. It also hopefully means that the dryer will be fixed by the time I need to do laundry two Saturdays from now.

I love my systems and routines. I do not love when they fail.

The revised plan was the laundromat. (I tried a nearby friend, but she was at the spa for Memorial Day Weekend.) That meant getting up early for church, coming home for lunch, and then straight to the laundromat. This outfit was nice enough for church and comfortable (and cool!) enough for laundry. I felt like St. Martha.

Early church generally means going to a different parish than usual. I was back at the one with the agonizingly long pre-Mass announcements. I glanced at my watch after the Gloria, though, and we were only 10 minutes in, so I guess it wasn’t that long. Noticeably shorter than last time, but still. That encourages people to be late so they “won’t miss anything.”

A deacon whose name I don’t know preached the homily. He happened to be visiting Montreal with his wife one year on Corpus Christi. In Canada, the feast is on a Thursday, the day customarily dedicated to the Eucharist. (Think “Holy Thursday.”). They were stunned to find the cathedral packed, and they joined a procession of thousands after Mass, walking behind a giant monstrance on a flatbed truck through the streets of Montreal. Now that is public piety!

Deacon What’s-His-Name also mentioned that Corpus Christi’s inclusion in the calendar was inspired by the vision of a sister who saw the moon brightly shining except for one shadowy area. The shadow was a feast missing from the calendar, one which would honor the Body of Christ. Done.

Finally, he said that tabernacles (a.k.a. the gold boxes where Jesus lives; my definition, not his) started as cupboards used to reserve the Eucharistic bread between Sunday Masses. They evolved into tabernacles more like today’s, which stored Communion to be taken to the homebound. After Vatican II, adoration chapels were encouraged, and many sprang up. Am I the only one who did not know Vatican II encouraged Eucharistic adoration? I have felt encouraged in that devotion as long as I’ve been going to church, but I would have chalked that up to my generation, not the previous one. Hmm.

Ironically, I was sitting just too far back in the church, so I did not actually get to receive the Blood of Christ. I usually wouldn’t mind, but this seemed like a bad day for that to happen. Oh, well. Maybe next week!

“Am I the only one who did not know Vatican II encouraged Eucharistic adoration?” I would never have guessed that! Like you said, it seems like our generation should have been the one to encourage it. Maybe that’s some generational pride we need to work on, and a nice reminder that good came from (or was supposed to come from) Vatican II.

Agreed. Maybe our generation can be the one that makes it stick?

Very cute! I love the length of that skirt.

Thanks! I like it, too, although I’m pretty sure it’s supposed to be closer to ankle-length. I just have really long legs!

[…] mentioned in my last post, which was last week’s Sunday Style, I let the week slip away from me. I prioritized other […]

[…] especially when single-girl life hasn’t left you without someone to keep it for you, and (b) our dryer broke a few weeks ago, so I have a backup now that is not a laundromat. I like living in this house, but […]