Sunday Style: Everyone Stood Up!

I was so, so happy to wash my hair in a hot shower this week. It made the whole day better. And then there was Jesus! Here’s what I wore to church: 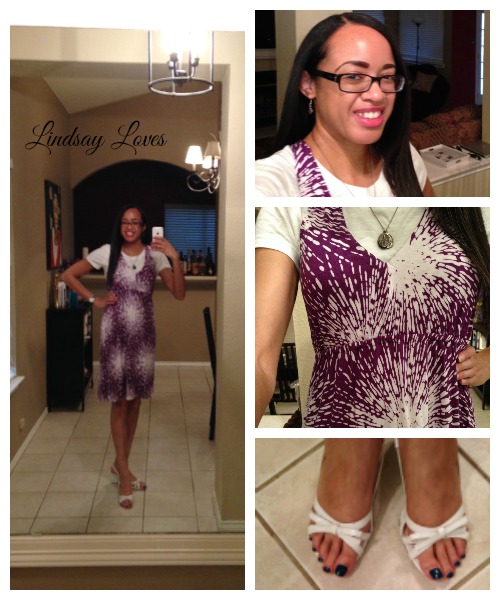 I call this my fireworks dress, after a comment my friend Katie made on an Instagram of this outfit from Sundays past. It seemed appropriate for the weekend. You can also sort of see the slightly heather print of this shirt. I don’t think heather white is a color, but I like how this otherwise boring white t-shirt has a little lagniappe.

Guys. I forgot my phone on the way to church! I usually listen to the Christian genre station on Pandora while I do my hair and makeup. This week, I did not remember to put my phone in my purse. I also usually write out my tithe check right before leaving and enter the check number into my YNAB app immediately. I wrote the check several days early, though (uninteresting story), so I didn’t have to do that, and I missed my trigger for “put phone in purse.” I realized my habit failure when I reached in to switch the ringer off before Mass. Conveniently, I still carry one of those pocket notebooks for when I need an actual piece of paper, so, after Mass, I scribbled down my homily notes by hand. I felt like a dinosaur. A well-prepared dinosaur. A Boy Scout dinosaur?

Fr. Associate Pastor was back in town, so he was back in action at the Sunday evening Mass. He started his homily by telling the story behind a South American statue of Christ. Not the one you’re thinking of in Rio, but a different one: Christ holding cross, standing on the border between Argentina and Chile. By legend, it is cast from the melted-down guns of war.

At that point, I wondered, “Why have I never heard of this?” Did you think that, too? Well, now you have. As Fr. AP continued to recount, Argentina and Chile had been preparing to go to war over their border dispute, but the bishops convinced the people to choose peace instead. The statue was erected and positioned on the border as a reminder of the countries’ promise to maintain peace in favor of war. Similarly, Jesus tells the disciples to use peace as the test of whether a new town was ripe territory for evangelization. Peace first, then the war against sin raged in their hearts. It was a unique homily, that’s for sure.

It was also a Mass with some fun times. I might not have my own kids’ Mass behavior to report on, but that doesn’t mean nothing good happens.

Although Fr. AP referenced the saccharine song “Let There Be Peace on Earth” in his homily, we did not actually have to sing it. We did, however, sing “I Heard the Voice of Jesus Say,” which I adore. If I die suddenly, I want that at my funeral. (If I die after a long, slow illness, I still want it.) We also sang “God of Our Fathers,” which was actually written for the centennial of the signing of the Declaration of Independence. It was also, as all church songs ought to be, easy to sing.

During the Eucharistic Prayer, I was happily distracted by a tiny voice singing the ABC song. It’s so cute when the little ones choose the absolute quietest parts of Mass to make a joyful noise. I guess it would be less cute if they shouted “I have to poop!” (I think that’s a Jen Fulwiler True Story.)

Finally, I was reminded how easy it is to go on Mass-inspired autopilot and succumb to positive peer pressure. The choir’s offertory song was unusually short. Usually, the pianist and/or organist will improvise long enough to cover the hand-washing. This time, there was just silence, so Fr. AP proceeded with the “Blessed are you, O Lord” part over the bread. If you go to daily Mass, you hear that part all the time. You know to stay seated, and you know the “blessed be God forever” response. Someone up front must not have known all of that and just stood up, prompting the entire rest of the church to do the same! I looked around, confused, reasonably confident that we were not supposed to stand up yet. “What about the hand-washing?” I thought. As the altar servers moved down to their kneelers near the altar (where they usually go just after we all stand up), I just closed my eyes so I wouldn’t have to try not to laugh when the servers realized what had happened.

It all worked out, though. Hands were washed, parishioners stayed standing, Jesus came down, and all was well.

Anything hilarious happen at your church this weekend? Do you get church giggles like I do? Have you ever made the whole church stand or sit at the wrong time? (I have!)

Maybe I just didn’t wear it for the photo! No, seriously, I don’t veil, but I’m not opposed to it.

“I was so, so happy to wash my hair in a hot shower this week. It made the whole day better. And then there was Jesus!”

Cutest opening sentences ever. Also, that story of the statue on the Argentina-Chile border is so cool! It’s official name is also cool: Christ the Redeemer of the Andes.

Aww, thanks! Christ the Redeemer is just all over the place in South America, apparently.

The print on that dress is so fun! Perfect for the weekend of the 4th :)

Thanks! Maybe I get extra patriotism points for just wearing it whenever I want. ;)