Sunday Style: Two for the Road

So much for getting back to weekly posts. Sometimes is better than never, though? Right? Here’s what I wore. 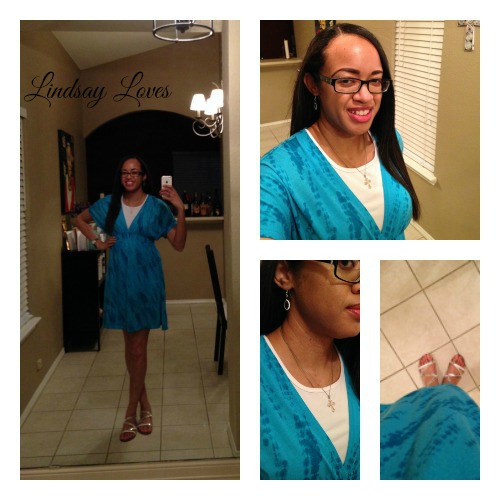 I saw a meme on Facebook that epitomizes my fashion choices right now. “It’s fall in Texas, which means nothing, because it’s still 90 degrees and sunny outside.” The warmth is less than ideal, but it gives me an opportunity to keep wearing my summery clothes, so I have been taking it. I needed a sweater last Friday morning, which was kind of exciting, but I had to take it off after lunch. Too warm, even inside the office.

Fr. AP gave the homily. He said that the Bible is the best sold, most owned, and least read book in the world. Yep. We struggle to understand it because it was written in a time and culture so different from our own, but it was written for us and for our understanding.

At the beginning of Mass, he’d told us that the readings would be about living our faith and living moral lives, but there wasn’t much about that in the homily except for an impassioned call to vote in accordance with both faith and morals. Fr. AP has been in the U.S. for a while, so I’d imagine he’s aware that we basically never have a fully Catholic candidate. I did, however, feel even more confident in my decision to not vote for either of the major party candidates, even though I know one of them will probably win. I refuse to believe that a vote for A is a vote against B or that a third-party vote is a waste. We don’t vote against; we vote for. I will be held accountable on judgment day for my choices, so I have to do what’s right for me.

I don’t usually talk about politics (on my blog or ever), but it feels right here. On a related but non-church-specific note, the voting episode of Black-ish pointed out that the grandmother character said she’d be voting for whoever the Democrat is, but her actual position on the issues squares with the most extreme Republican values.

Granddaughter, reading from a “where do you stand on the issues” quiz: Should we build a wall between the U.S. and Mexico?

Grandmother: We don’t already have one?!? No wonder so many of them are coming here and taking our jobs!

It was hilarious and sad. The episode that was allegedly about faith was really weak, but that voting B-plot almost made up for it.

We had the same sad ending to Mass, ruining my reasonably good Mass mood. Everything else was quite nice. 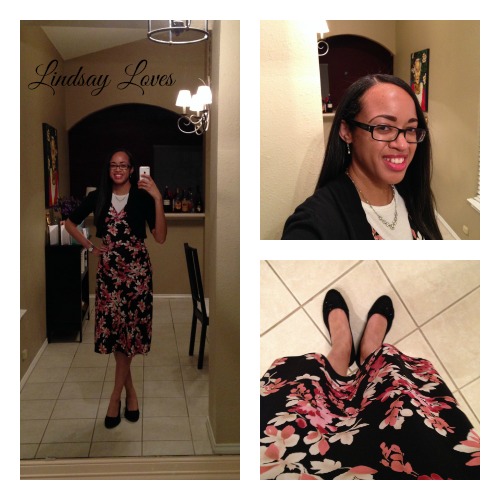 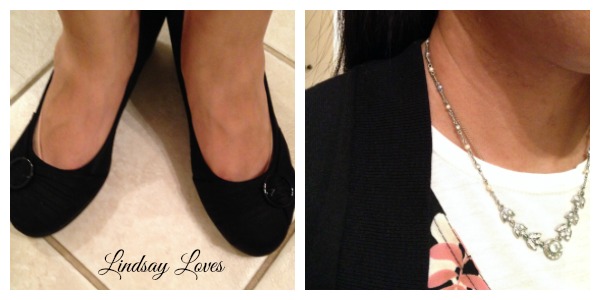 Mr. Man and I had a special occasion to celebrate, so I dressed up more than usual. Maybe I can’t be with him in person, but I can at least look fabulous from a thousand miles away.

I got these new shoes to wear to work and to an upcoming wedding. My previous wedges were also purchased for a wedding, but they were so comfortable that I started wearing them to work most days. That was four years ago. My beloved wedges got so loose that I started occasionally stepping right out of my shoes as I walked around my office! Conveniently, it was BOGO time at Payless, so I got some replacements.

Fr. Associate Pastor began his homily by identifying two kinds of prayer: formal and spontaneous. That sounded like too few kinds to me, but it’s not my homily. He went on to say that formal prayers are what we offer during Mass; and spontaneous prayer is used for group gatherings, meetings, and meals. Call me crazy, but I’m pretty sure “Bless us, O Lord” still counts as formal.

He also mentioned something about humility or perseverance in prayer that I can’t quite remember. I usually take notes immediately after Mass, but my dad called right after I started them, so I got distracted. I have a journal that would be perfect for taking them during Mass, but I’m not sure I feel comfortable with that. I might try it.

There was also another instance of the dreaded homily joke. It was the one about St. Benedict challenging a peasant to recite the Lord’s Prayer without getting distracted in exchange for the saint’s horse. I think it was funny the first time I heard it, but that was a long time ago.

Mass is inherently miraculous because heaven touches Earth every single time. I don’t usually let any of the externals get to me (lackluster homilies, my bad mood, not my favorite music, wacky versions of once-a-year liturgies, etc.) But altering the way Mass ends and claiming that such a change is an improvement? That’s not okay. I’ve done everything I can do at this point. It’s affecting my spiritual life negatively. I need to go where my heart is leading me. If I am wrong, God will show me. He always does.

Our pastor keeps talking about how “we’re voting for the ideals, not the candidate, and one candidate better represents the ideals for which the Church stands” and it drives me crazy… because no, NEITHER candidate represents the Church’s ideals. Ugh. I’m with you – we need an overhaul of the entire party system.

Well, that’s just completely wrong. We are, in fact, voting for the candidate. That’s the basis of the idea that politicians lie. They say things to get elected, but they can’t promise to actually do any of those things, and they can (and do) change their minds. On the one hand, that’s good, because it gives them the opportunity to recant from things that seemed like a good idea at the time, or to shift with they get new information (like a war). On the other hand, it’s the worst when people don’t mean what they say. Blech.

Black-ish makes a great point. It reminds me of my late grandmother, who was born in the 1920s and grew up during the Depression. Til the day she died she was convinced the Democrats and Republicans were the same today as they were then. She couldn’t understand that times change.

Seeing how rapidly and radically both parties have shifted in just this election makes me wonder what they, and American politics, will be like when our generation is in its 70s and 80s.

I was shocked when I first learned that the Democrats and Republicans used to have the opposite conservative and liberal associations! That historical fact encourages me to stick to issues rather than parties, and it also confuses me when things like conventions and primaries come into play. Representative democracy is a tough concept for me. Some people get to vote for whoever they want, but other people only vote for the people that some other people already said they want… so what does voting mean? With great power comes great responsibility.

[…] week’s dress (along with the previous week’s, actually) belongs to the subset of dresses that I can only wear comfortably when I’m on the […]