I’m pretty sure it’s fall now. They only time it’s really warm enough to be out without a coat is midday, so we’ve probably transitioned. Maybe my Day After Thanksgiving project should be putting my summer clothes away.

Here’s what I wore on Sunday: 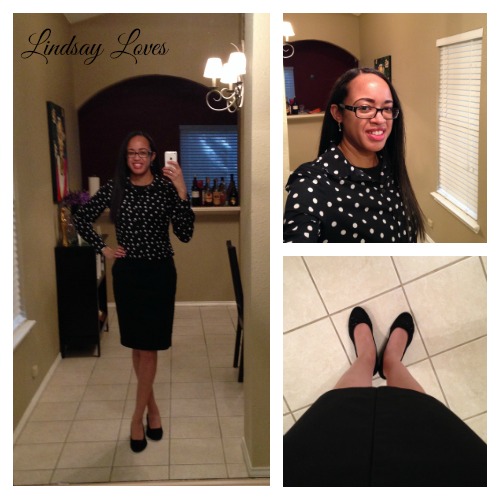 I am still adjusting to my new Sunday schedule (since my new parish doesn’t have a Sunday evening Mass), so I legitimately forgot whether I needed to adjust last week’s wake-up time forward (to wake up later) or back (to wake up earlier). I chose forward, and I chose poorly. This outfit needs no ironing.

I think we had Deacon G preaching at Mass this week. He’s the same deacon we had serving last week; I just don’t know his name! He said that false prophets come in many forms. At the time of Malachi’s prophecy in the first reading, the Temple in Jerusalem was being beautifully constructed, but the people’s faith had long been abandoned. Malachi warms the unjust, the liars, and the hypocrites to fear the exposure of the truth at the end of time, although the just have nothing to worry about. As Jesus tells us, we’ll see all kinds of signs leading up to the end of time, including disaster and divisiveness, but we still won’t know that the end is coming until it does.

He also dropped in some very even-keeled election talk, which was surprising (that he mentioned it; not that it was even-keeled) but not unwelcome. Even among Catholics, who were apparently 25% of all voters, the split was roughly half and half, slightly in favor of Trump. That shows that many chose, as Deacon G put it, the lesser of two “undesirable options,” but it also shows the difficulty of following our consciences. It furthermore shows how divided we are as a country and how much we need unity.

He ended his homily with a prayer by Archbishop Carroll at the first ever synod of bishops in the U.S. The prayer spoke of the reality that all power comes from God and that our leaders need his guidance, wisdom, and strength to exercise it justly. Overall, this homily seemed to have a much less scary focus on justice than I usually hear from people who are knocking justice in favor of mercy. Both are needed.

We finished Mass by singing “The King Shall Come When Morning Dawns,” which I love for Advent. It also seemed appropriate this week, with its focus on the return of Christ Incarnate at the end of time as opposed to the initial Incarnation that we celebrate at Christmas. This parish has excellent music. That’s not why I go there, but it is a lovely bonus.

Did you have any election talk at church this week? How did it go?

I loved your outfit!! Thankfully, our chaplain stepped around politics – although, he warned us that we never know the day or time, so we must always be prepared! Furthermore, our chaplains have been speaking a lot (pre- and post-election) about how “to be just is to be merciful,” so the two actually are harmonious together. Just more food for thought!

Thank you for stopping by! In my Bible study last night, we touched on justice and mercy, too. We’re reading the Book of Judges, and that is where “angry Old Testament God” is very obvious. I have no problem with it, but some of our members are unsettled. So much to consider!

We had quite a lengthy homily about the election from a visiting priest – I was rather surprised… evidently he didn’t know that the 7 am Mass is for short homilies ;)

Haha, I guess not! Sometimes you just get on a roll. What is the congregation going to do, go on to the rest of Mass without him? ;)

Like Anni’s priest, the one who preached at my parish last weekend also avoided the election and also had a more-comforting homily than might have been expected given the readings. Both things were appreciated :)

It is definitely a good time for comfort. And awareness. So many emotions.