Sunday Style: Not Quite Warm Enough

I went home this week for my grandmother’s funeral (finally), so I went to Mass on Saturday. I can totally still post this today. That’s valid, right? 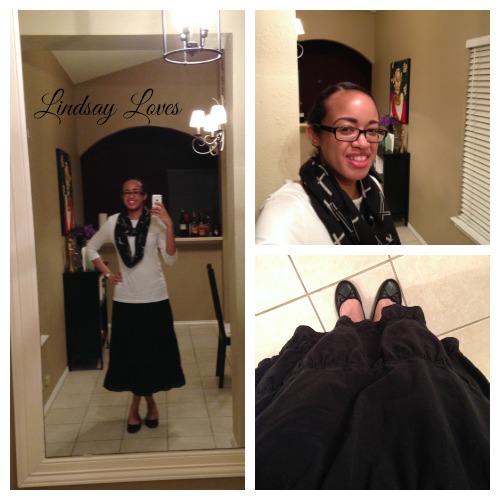 I have officially given up and decided that it’s cold weather time now. I used my day off from work today to switch out my winter and summer clothes. Now that I think about it, there might be some stragglers in the hamper, but I’ll get those later. This skirt is one of my transition items. Since I was traveling on Sunday, I went to the Vigil Mass on Saturday evening. I forgot how much the temperature drops when the sun goes down, so I was actually cold when I left the church! I otherwise really liked this outfit combo. I wear a lot of black and white, but it looks good, so I see no reason to stop.

We had Msgr. Old Pastor again. He started Mass and then his homily with a long tangent about the liturgical cycle. It was only on his final mention that he correctly highlighted Christ the King as the last Sunday of the church year, not the last day.

As was mentioned in the Gospel, it was scandalous for Jesus to be crucified under a sign proclaiming him the king. The Jews had a king: God. Monsignor called the sign “a bold sign of faith.” It is for us who live with the resurrected Christ, but he missed an opportunity to point out that the people who had him crucified hated that sign. It was Pontius Pilate who ordered the sign to be written. He intended it as mockery. The priests wanted the sign changed specifically because they didn’t believe Jesus was their king. That extended reference was what we ed school grads call a “teachable moment.”

I also noticed that Msgr. Old Pastor’s homily had no mention of King David, who was king after Saul, even though we just heard a reading that mentioned both of them. However, our music director selected Psalm 23 instead of the one given in the lectionary. (Substitutions are frequently allowed.) I thought that was a nice connection to the shepherding responsibilities of a king. True kingship is not just about ruling people and making them suffer. Kings are supposed to be caretakers.

The music was excellent again, including the monsignor’s chanting, although I realized that “This Is the Feast of Victory” is really hard to sight sing! Maybe that’s why my former parish did it frequently but never gave the congregation a number to sing along!

So sorry to hear about your grandmother :( Praying for her soul!