The upside of winter is that I have so many outfit possibilities thanks to layering. The downside is that it’s cold. No getting around that. Here’s what I wore to church this past Sunday: 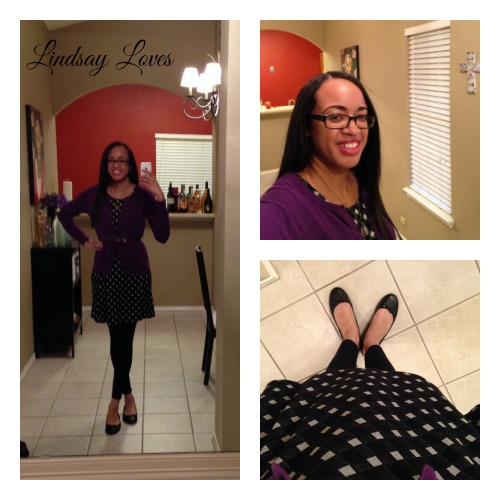 Yes, that’s just one earring. I was trying to put them both on while driving and forgot the left one entirely! That ear is covered by my hair, so I didn’t even notice it myself until I went to take them off before bed. I found the other earring in my car, right where I’d left it. The upside of going to church by myself is that no one else ever makes me late. The downside is that I can’t do anything on the drive over there except drive, put on lip balm, and apparently put on only one earring.

I bought this dress as part of my remixable wardrobe. It’s not quite as remixable as I’d hoped, but I’ve managed to wear several different colors with it, so that helps.

Although I was running late for Mass, I made it before the announcements began. Happy day: they didn’t take nearly as long as usual! Or maybe I just didn’t feel as exhausted because I hadn’t been in the church for very long. Either way works.

Our guest celebrant was a priest I have met before. He came once for Spirit & Truth. We always sang in Latin because it’s the language of the Church (and you’re never going to learn if you never try), but he insisted on using English so we could “get with the times.” That’s a direct quotation. We struggled greatly that night because we were so unfamiliar with the English and knew the Latin by heart, and we did not invite him back.

So I wasn’t expecting much from Mass. Of course, he personalized bits of the Mass, including jumping in on our blessing at the end (it’s “May almighty God bless you” for a reason, Father), but he didn’t change the order of anything. Thanks be to God for that.

In his homily, he told us that you can catch more flies with honey than with vinegar and expressed his dismay that the Church offers us St. John the Baptist as an icon despite his definite vinegar approach. Oooooookay.

Despite the distracting cartoons of St. John the Baptist and St. Nicholas he had taped to the front of the altar, I was able to appreciate the shout-out to the latter. And I got the point of Mass: the Eucharist. We closed with “People Look East,” which I adore, and all was well.

Oh what an awkward experience… cartoons on the altar?? So, so strange!

I was about to post the same thing: Cartoons? On the altar?

“Awkward” is the perfect word. I wanted to hope that other people felt awkward too, just so I wasn’t alone, but that didn’t seem totally charitable. But like I said, Jesus came, and that’s all I really needed anyway. I just like it so much when there are other joys, too!

Cartoons are called icons in the Church. And please don’t tell me those pictures were somehow different from icons. My aesthetic preferences are to minimize icons and statues, etc and to go for more a simple clean Ikea look inside churches. But many resist such a look and embrace the old-style iconography from centuries ago when most parishioners were illiterate and needed pictures and statues.

If he had written his own icons of St. John the Baptist and St. Nicholas, or even displayed icons someone else wrote, that would have been cool. These looked like clip art printed on 11×17 paper. I would argue that visual literacy is important, too. You should be able to tell that a picture is St. Nicholas or Jesus or St. Cecilia based on what else is pictured. I love words, but they’re not everything.

What a great dress, and it does look really versatile. I agree about the downside of winter, but I love wearing layers too. That totally sounds like something I would do, leaving my earring in the car! :)

Thanks! What I should do is get ready early enough that I can put on my earrings before I leave the house. Baby steps.