Sunday Style: With Another Cameo By Mr. Man

Whew! I had a whirlwind couple of weeks and weekends. My saving grace is that, thanks to GTD, I’ve gotten into a rhythm of reviewing and looking forward through my life so that (ideally) nothing slips through the cracks. Thus, I remembered to take my outfit photos even though I’ve been missing the link-up like that was my plan all along.

So here’s a little catch-up. 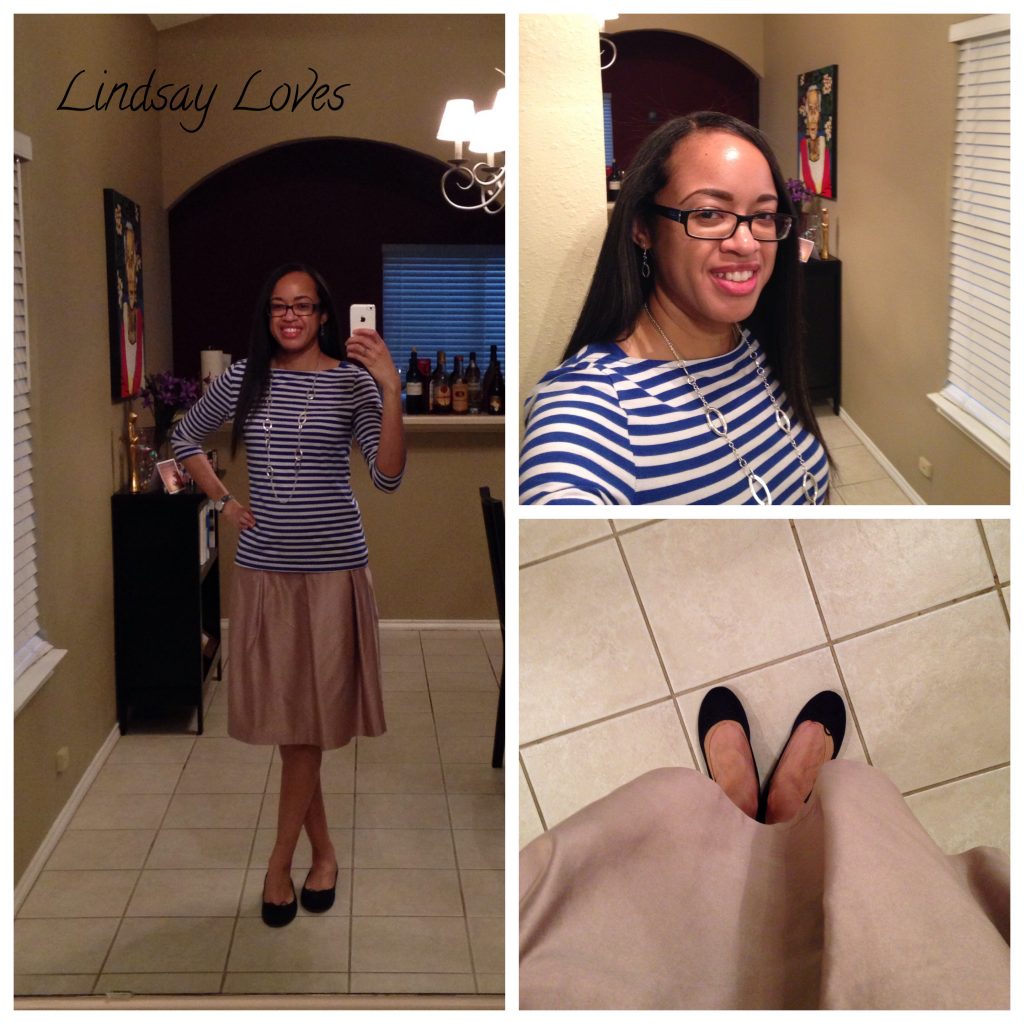 I did a little outfit experimenting this week. I wear the top half of this outfit to work all the time. The skirt is too fancy for work, though, so I don’t think I’ve ever thought to put these pieces together for church before. It worked fine.

Fr. Pastor started his homily by identifying the theme of the day’s readings as avoiding revenge, because taking an eye for an eye and a tooth for a tooth is not allowed anymore, and it shouldn’t have been allowed at all. I struggle with that particular angle because that makes it sound as though the OT laws allowing eye-for-eye, tooth-for-tooth justice were wrong. But those laws came from God. Is God’s law wrong?

The better explanation I’ve heard is that “an eye for an eye” was supposed to be a limiting factor. Without that law, if someone put out your eye, you could kill them in retribution. “An eye for an eye” leveled the playing field from the brutality that would ensue otherwise.

Under the new covenant, which Jesus is describing, the limiting factor of just “an eye for an eye” is now raised to better fit the law of love. Now, if someone puts your eye out, you can’t take out their eye anymore. You can’t take anything. Now, you have to give even more than what was taken from you.

Now, the old law allowing someone to strike you on just one cheek is passing away. Now, you have to rise above by turning the other cheek and letting them hit that one, too—which is against the old law. Jesus is raising the stakes for the new and eternal covenant, and he insists that we rise to the challenge.

Back to Fr. Pastor. He also told an odd story about a plane that was crashing due to the passengers’ squabbling along political lines. (I know; I don’t get it either). Finally finding a uniting factor (not wanting to die), they ask the priest on board to pray for them. He tells them to take up the collection first. I think the collection part was probably supposed to be the punchline, but no one even chuckled. And it was an especially awkward story because we real people were just about to gather the collection.

Overall, I found myself very reflective over the “holy” and “perfect” commands in the readings. Those are bold charges, but we also heard in the psalm that God is kind and merciful as we struggle to be ever more holy and perfect. That is comforting. 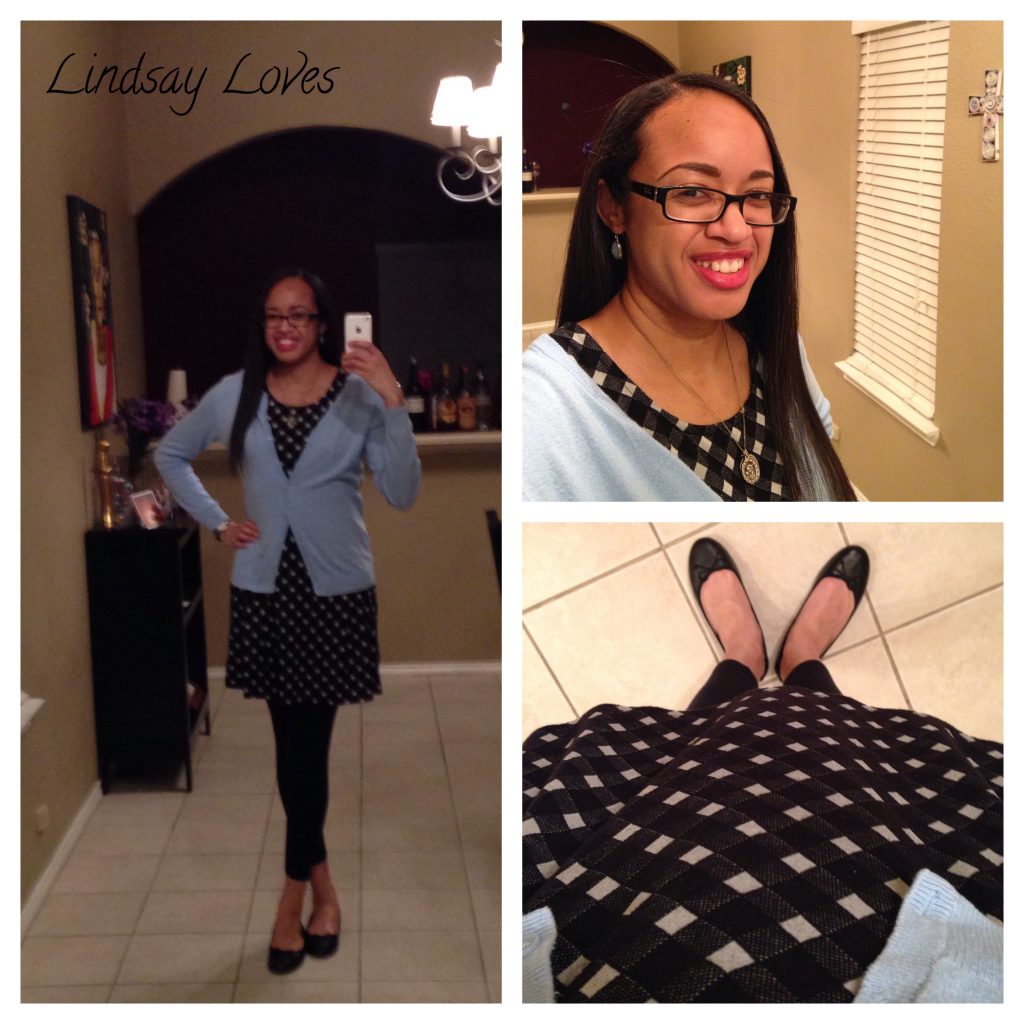 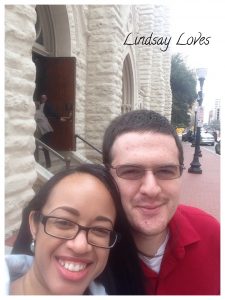 On Friday, it was so hot that I genuinely considered turning on the A/C in my house. I think it reached 90! The Texas wildflowers have sprouted! So I was quite miffed that the weekend got cool and windy. I was headed out of town, so I couldn’t just dress based on the current weather fifteen minutes before I walked out the door.

I’ve learned not to rely on the weather to be the same from morning to afternoon, let alone over the weekend, so I had to choose outfit items that I could modify in case of sudden warmth or chill. My leggings are cotton, so they breathe well enough to keep me from overheating if it’s technically too warm for them (whereas tights don’t work like that). My sweater sleeves can be rolled up in a pinch. As it was, I ended up needing to not only wear a coat but also zip it up.

But I was happy in general, because I got to see Mr. Man again, this time in Ft. Worth. We went to St. Patrick Cathedral downtown, which is a beautiful church with one of the best cantors I’ve heard in a long time (and my parish in Austin has really good cantors).

The priest’s message was to not fear anxiety or let it keep us from trusting in God. Now that I think about it, anxiety is a kind of fear, so that’s definitely counterproductive. There is enough actual fear to deal with without manufacturing it ourselves.

It reminded me of my approach to my work. I am a paper-pusher. My job requires me to be just one cog in a big machine. I stick to spinning my own belts, so to speak, as quickly and efficiently as I can without rushing or making a ton of mistakes. I don’t worry about whether the other cogs are spinning their belts fast enough or what might be coming up on my belt. I have plenty of belt to spin as I go along.

If only I could apply that attitude to the rest of my life!

He also highlighted that the first reading has one of the few female images of God, as a mother comforting her child, whom she could never forget. Through all three readings, we are called to trust that God is watching out for us despite what happens, even when it seems like he might have forgotten about us, and that causes us to worry. This does not, however, mean that our lives will be worry-free. No guarantees there.

Musically, we sang “I heard the Voice of Jesus Say,” which is one of my favorites, for the procession, and then we had something with same tune for the recession. It was unusual. I can’t decide whether I liked that bookending.

I definitely enjoyed the use of Eucharistic Prayer IV. Ever since I started studying covenant theology, that prayer has been blown wide open. Eucharistic Prayer I is sometimes required, but when it’s not, priests usually use II or III because they are much shorter. So IV is never required, and thus it is always a gift to hear it. It’s my favorite. And so is my Mass buddy.

It always throws me off to sing a hymn tune with different words when I’m used to another version! Maybe there was a substitute organist who only had time to learn one accompaniment ;) Hope you and Mr. Man had a great weekend together!

Haha, that would be an excellent reason for two songs with the same tune! We did have a great weekend; thank you!

EP 4 is lovely and I agree used too rarely! I surprised my pastor/spiritual director by picking it for my toddler daughter’s funeral mass when he suggested one for of the ones for children (which would have made more sense if her friends were old enough to understand). I studied it in grad school and learned that it is an adaptation of an early Christian one by St. Basil the Great and a very similar version is EP D in the Episcopal Book of Common Prayer. It focuses on the Holy Spirit which is a huge part of the Eastern Orthodox and Catholic theology of the Eucharist–they pinpoint the absolute high point of the consecration being the epiclesis=invocation of the Spirit rather than the words of Jesus from the Last Supper (though both traditions have and cherish both elements, it’s more of an emphasis difference). One of the coolest liturgical things related is that they sometimes add a little boiling, or at least hot, water to the wine to symbolize that. Okay, end of theology geek commercial!

Ooh, that is some awesome theology info! I’m very sorry to hear about your daughter. I’m glad you could evangelize among Christian churches a little bit despite the sad occasion.

[…] Many things to Mr. Man, as usual. I got to see him again last weekend! I also find myself saying more often than usual around the office that you have to make the […]