I have no special guests this time, but I do have a special purple outfit. We seem to be back on our usual weather schedule, so summer it is. 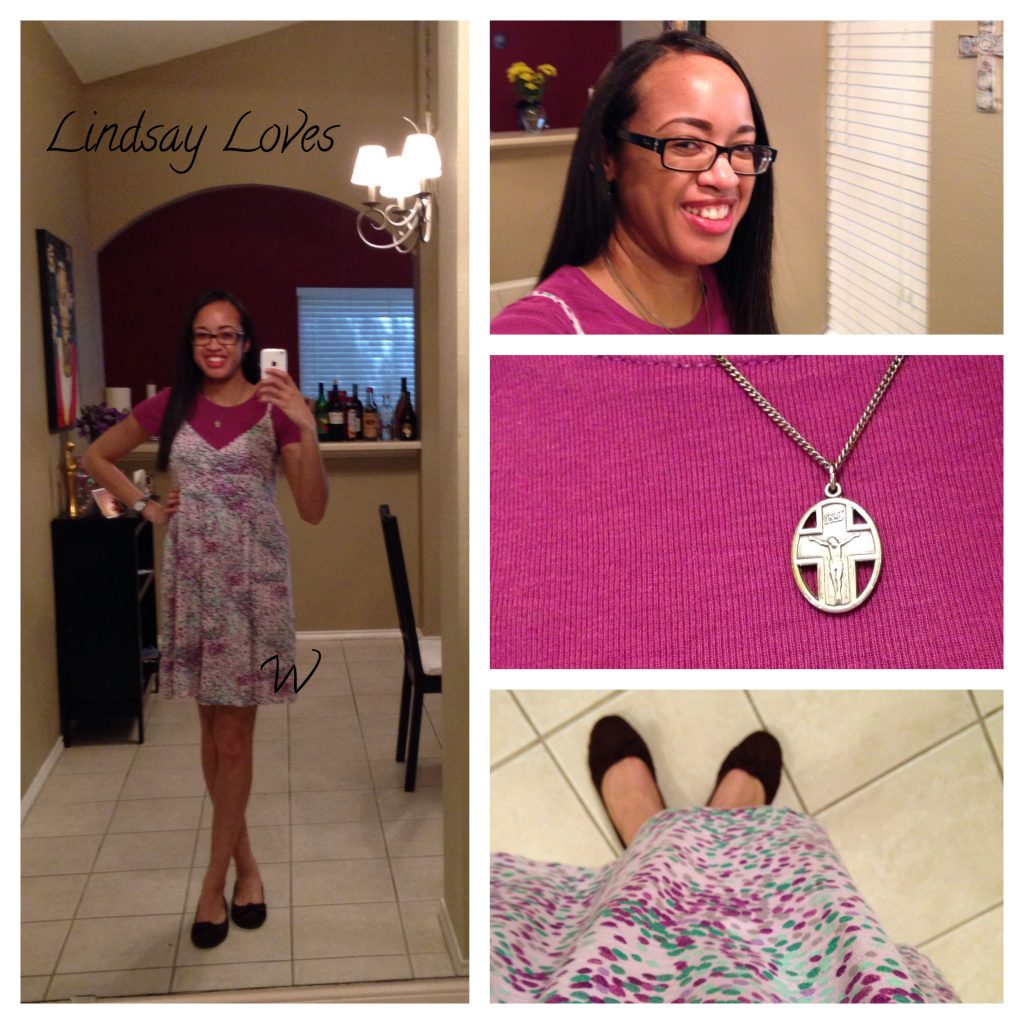 I had a tiny bit more time than usual to consider this week’s outfit, so I went for an old standby. I like to wear this one even when it is not a purple season.

I was back at my regular parish this week, so I decided to try my idea from last week. A friend gave me a Christian Inspirations Journal a few birthdays ago, but I could never find the right use for it. After some recent difficult episodes in attempting to remember the homily, not fall asleep during it, or both, I thought it might be time to treat that like any other presentation I attend, and take notes. I have always found notetaking really useful for focusing my attention, but I’ve never thought to try it during Mass. I take notes at other churchy presentations and when I’m physically in the church for a non-Mass event, but homily notetaking always seemed weird.

Well, it still seems weird. Many things feel weird the first time, and this was no exception. I persevered, and I plan to do it again next week, so we’ll see how it goes.

Msgr. Old Pastor preached the homily. He focused mostly on the Gospel, which felt a little odd because the Sundays of Lent do such a great job of getting all the readings to align. I’ve never given a homily, but it seems like that would make the homilist’s job a little easier. The theme is built right in.

He pointed out that the Jews hated the Samaritans so much that they would usually travel around Samaria instead of through it, taking an extra day or two just to prove their point. He didn’t explain why, though; I learned that from the Bible Timeline. The Samaritans were the descendants of Israelites (from the northern kingdom), who had intermarried with non-Israelites after the Babylonian exile. The southern Judeans had never intermarried, so they considered themselves purer and better than the Samaritans. That’s why the woman at the well has had five husbands. It’s not just a random large number; five other nations had mixed with the Israelites. I’m grateful to my Bible study for opening up Mass like that!

He did, however, note that the woman speaks to Jesus in a way that demonstrates her rapidly increasing faith. At first, she treats him like any strange man. Then she calls him her teacher, and then a prophet. Finally, she runs off to tell the people that he is the Messiah. As probably every priest who preached this weekend said, this is evangelization in a nutshell.

Msgr. Old Pastor’s parting words were to let God fill up the hole inside our hearts that longs for something more. We might try to fill it with other things, but only God belongs there. Curiously, the monsignor himself had some opportunities for that right during Mass. His lapel mic went out, so he had to preach his homily from the ambo. Since our church is built for amplified sound, he chanted the entire Eucharistic Prayer, in order to be as loud as naturally possible. He has an excellent voice, so it felt special and solemn. And we sang “I Heard the Voice of Jesus Say” during Communion, which is one of my very favorites.

Mass is always good when Jesus comes, but those little touches made this one extra nice for me.

I had my first Sunday mass at my new parish in Hillsboro, OR. The pastor was recovering from some illness and I couldn’t make out one word in 3.

Aww, that’s unfortunate. It’s the worst when any part of Mass is just meh.

Sometimes I really want to take notes during the homily but feel weird about it. So sometimes I’ll take out my phone and text myself or open notepad and it seems less odd. But I know what you mean any kind of presentation church or non-church I take notes why are we so adverse to take homily notes?

I know some people that will record the homilies to listen later or ask their pastor to share their notes with them. We have a new priest that was ordained last summer and I am facebook friends with him and he posts his homilies on podbean and I listen to them often.

I remember when I was in high school I went with a friend to her Lutheran parish for church and they gave out a combo bulletin/worship aid with all the music and prayers. In the sermon section, they had a place to take notes and fill in certain key points that the pastor was going to talk about. I remember thinking it was a really cool way and a good way to get your congregation to pay attention to fill in the missing words.

My parish allows one to sign up to receive the homily via email so it can be read in addition to being heard at Mass. This is particularly helpful at my parish since it is served by a group of Franciscans from India, and their accent can make them difficult to understand sometimes.

I read a blog post once about using phones versus paper in church (or maybe it was a discussion with the ATX Catholic crew), and it/they made the point that the actions we make on a screen are nothing like what we’d do on paper, so the motion can be more distracting. You don’t tap or swipe on a book. I took that to heart.

That bulletin sounds like a classic graphic organizer. We used so many of those back when I was teaching and in ed school. If it works to help adolescents learn, it will probably still work for adults!

I never knew that about the Samaritans! So interesting!

I always feel like chanting the pressures can be a great opportunity for humility for priests as well, particularly when Father doesn’t have a very good voice! (I’ve heard many poor singers improve with lots of practice, though)

I’ve heard priests’ singing improve, too! At my old parish here in Austin, the current pastor is a great singer. (He also composes.) The associate is not as great, but he sang Mass parts frequently anyway. I have a sneaking suspicion that the pastor convinced his associate to sing despite not being ready for the main stage. It was so encouraging to hear him using the voice God gave him for such a noble purpose.

Who knows, the priest might appreciate looking out and seeing someone taking notes!

I’ve never thought about it that way. I always feel encouraged (and humbled) when people take notes during my presentations, so why shouldn’t they feel the same way?

We heard about how Facebook can’t fill the holes in our hearts, but only God can… so we should stop looking to Facebook with frequent posting to get likes. I partly gave up Facebook for Lent (not checking except for Sunday) for the first time so the homily kind of spoke to me there.

I should take notes during the homily, too. I’m sure my paraphrase 5 days out isn’t entirely accurate.

Facebook hating is really becoming a thing. I’m one of the many users who finally uninstalled the app from my phone, but that seemed to break my Facebook habit as far as I needed it to be broken. I have to see photos of my friends’ cute kids somewhere! ;)