It’s beginning to look a lot like Christmas… (And I’m posting on the correct day and everything!)

As a professional Catholic (more or less), I would say I am most intrigued by Judaism and atheism. Agnostics I can understand: making a concrete religious choice is a big deal, and as someone who is often indecisive, I identify with choosing not to make that choice. I love Judaism’s cultural connections and epic history.

It’s harder to wrap my head around atheism. While studying astronomy in high school, I found out that astronomers and biologists are the scientists most likely to believe in God. The origins of the universe and the building blocks of life are so precise that it becomes harder to believe that they are simply accidents.

I read in the CERC newsletter last week an atheist creation story of sorts. It was tricky to keep all the characters straight, but somehow fascinating at the same time. I also felt that it was a fair parody, one that tries to be heartfelt while still being real and poking a little bit of fun (but not too much).

I do not, however, enjoy the atheist creation story as much as I like “Candlelight,” which is now one of my favorite songs ever, winter holiday season or otherwise. It is one of the few songs I have ever immediately known I must download. Who doesn’t love talented, well-dressed, sincere Jewish boys? (Answer: No one.)

In recent memory, I have seen four movies of note. Two I had intended on seeing eventually, and two I hadn’t, but I watched them all anyway.

The Rocky Horror Picture Show: I will admit that I only watched this so I would understand “The Rocky Horror Glee Show.” I was intrigued by Jayma Mays’ audition song being “Touch-a, Touch-a, Touch-a, Touch Me.” I also had a free On Demand movie coupon from my cable company, so I took the plunge. It was, in a word, bizarre. I can enjoy cult movies (like The Princess Bride or The Boondock Saints), but I need at least something resembling a logical plot. Rocky Horror lacked that. It did help me understand that episode of Glee a lot more, though, and it turned out being one of my favorite episodes of the season.

50 First Dates: My ex-boyfriend mentioned that he thought I’d like this one. He watched it without me, which was unusual since we watched so many together. He was right. I enjoyed Drew Barrymore and Adam Sandler in The Wedding Singer, but 50 First Dates was a much classier and more heartwarming story. That kind of dedication to someone you’ve just met is intense, and a little unbelievable, but also so sweet.

High School Musical 3: My sense of completion drove me to this one. I saw HSM 2 first at a CSC viewing party. (Fr. Kyle’s yelling “Don’t let her go, Troy!” remains one of the best moments of my life.) I caught the original HSM later and maintain that the story and character development in the second was much better than the first. As for the third, it was okay. I thought the dance sequences definitely took advantage of the increased budget and scope of a feature film, but I was back to not buying the story. I enjoy musicals, but I need a story, too. (Cf. this season of Glee, which has been kind of pathetic.) I liked the connections with the first film, but other than that, I could have died happily without finishing the trilogy.

Dan in Real Life: I watched this accidentally when it came on Fox yesterday afternoon after Millions. I’m so glad I did! The Truman Show is one of my favorite movies; I like it half for the incredible story and half for seeing Jim Carrey in a dramatic role with very light comedy. This movie was Steve Carrell’s opportunity to do the same thing. I loved the story, I loved how real the characters were, and I loved Steve Carrell’s character’s relationship with his daughters. I’d love to see it again when I’m not simultaneously reading blogs.

As it nears the end of the year, calendar people start looking for new calendars. I had a Harry Potter calendar every year from 2001 (when the first movie came out) all the way through college. I even had the “Heroic Moments” calendar that just had old movie stills since there was no new HP movie in 2004.

I gave up on the regular wall kind two years ago when I switched to Google Calendar full time, but I missed having a liturgical calendar because I’m a huge Catholic nerd like that. Then I found the answer. Since it’s online here, but not in the most handy form, I uploaded it to Google Calendar and made it public. If you are so inclined, you may subscribe by clicking on this link, downloading the resulting .ics file, and uploading it into Google Calendar or any other program that accepts the iCal format. Otherwise, you can view it on a standalone page here.

As much as these posts seem random and possibly shallow, I do usually enjoy them. These are pretty lame. You have been warned.

November 19: Save the Animals?

I Am a Beast

“Well, she’s finally done it,” you may be thinking based on this post’s title. “She’s actually gone insane instead of just coming frighteningly close like she did so very many times during ACE.” But no, dear reader, that is not evidence of my burgeoning insanity. I just gave blood.

I decided that since Thanksgiving is supposed to be about giving thanks (to God originally, but even being thankful for things like the sheer blueness of blue jays is better than total apathy), and since my first ever blood donation during Lent worked out so well, I would try it again after I came back from my mini Thanksgiving trip. I knew it would be a slow day, and it was already Saturday, and I had successfully given blood once before, so I didn’t anticipate too much trouble.

Fail. My phlebotomist, Nick, was kind of cute and very good-humored, so when the needle in my left arm failed to encounter a vein, skinny or otherwise, he stuck with me (pun definitely intended) long enough to try my right. For my patience and positive attitude, I was rewarded with not one, but two 80s-tastic bandages and the wonderful buzz of regaining my energy while watching Glee back at home. 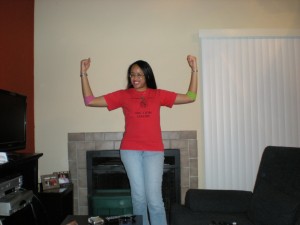 All in all, it was not a bad way to spend the end of my weekend. Well, at least until I had to haul laundry with holes in my arms. Nevertheless, I remain either a very sad case or a total beast. I prefer the latter.