One of the benefits of blogging more frequently is that I pay more attention to making the blog better. If you’re anything like me, you like to subscribe to the posts you comment on, just in case anyone responds to your comment(s) or the discussion gets interesting later on down the line. I use Google Reader to subscribe to blogs, so after I read (and comment on) the post, it disappears. Out of sight, out of mind. Email subscriptions help with that problem. Granted, just as “liking” or commenting on facebook posts can do, this can be annoying if you subscribe to a popular post, but stopping the subscription should be just as simple as starting it. Please let me know if it’s not working or you have trouble. Otherwise, enjoy!

A Set to Settle

I have lived in Austin for five months now. I am starting to settle in to my new life. Some part of me knows I will never really be a Texan, though. When I ran errands this afternoon, it was so hot that I easily broke a sweat while driving around town with my windows down and my radio up. By Tuesday, an Arctic cold front will have rolled in and the temperature dropped forty degrees. I live in a whole different country now.

One thing I have not done to settle in is finish my furniture shopping. Before I moved here, I owned exactly one piece of furniture: my Billy bookshelf from IKEA. I had to leave Billy at home, which was sad. It’s a great bookshelf.

Now, of course, I have more furniture, also mostly from IKEA. My mattress has memory foam on top; it is heavenly. I am still, however, in need of a bookshelf (or two…probably two) and a dresser with a mirror. The dresser I want is from IKEA as well, but I could probably make do with any sturdy bookshelf. Not having purchased these last two (or three) pieces of furniture is the main reason I don’t quite feel settled in my apartment, at least. I love my books, so I hate that I can’t even look at them because they’re still in boxes. And I hate doing my makeup in the bathroom (which I realize is not equivalent, but it still feels parallel).

I also lack a bed frame, but I’m flirting with the idea of not getting one. My current heavenly-mattress-atop-box-spring combo is working just fine, though it is very low to the ground. (Side note: IKEA does in fact sell box springs; most bed purchasers just don’t know that.) The advantage of not even having legs/feet under it is that I know there’s no dust under the bed!

My decorating scheme has become less about having a matching set than being comfortable, and in my world, less dust is always better.

The Night of the Possum

One of my biggest regrets about my time in ACE is that I did not blog, journal, or otherwise write down most of my experiences. My memory has always been tenuous at best, so I know there are some moments I’ll never remember. Some of those I probably don’t want to remember. One stuck with me so much that I put it on video.

When I first moved to teach in ACE, my dad and I drove down from Maryland in the car I’d bought mere days before. In Maryland, the dealership registers new cars and calls the buyer to pick up the license plates. Since I had moved out of state, my mom picked them up and mailed them to me.

After school one day after the plates had arrived, I grabbed a screwdriver (the sole tool I owned at the time) and headed outside to put them on. I leaned out the screen door, noted that it looked like it might rain while I was in the carport, and went back across our duplex for my coat. Coming back to the screen door, I started to go outside, but then I felt something brush against my ankle. I looked down, backed up, and made a loud whining noise that is difficult to describe.

“Lindsay? Are you okay?” called my housemates.

“Because there’s a possum in the house.”

Then commenced ten of the most ridiculous minutes of my life. I panicked in response to my female housemates’ panicking and climbing on the furniture, which called our male housemates to the rescue. One attempted to stand on a chair, too, which was a huge “man up” fail. One of the girls grabbed a video camera I hadn’t known she owned until that night. My trusty carpool buddy was definitely the man of the hour. Using our recycling bins and trash cans, he cornered the frightened little possum behind the spare washing machine and swept him out the door with a broom.

I’ve never seen that video, but it must look something like a brighter version of The Blair Witch Project or Cloverfield. And the reason I chose this moment as a time I’ve witnessed bravery in someone I admire? That Carpool Buddy saved us all from the possum that night!

—
Thanks to The Daily Post at WordPress.com for the idea for this post. I’ve always enjoyed memes, particularly the Friday Five, but having a fresh source of regular, random ideas is most welcome.

I would like to protest these not being complete sentences. I don’t think that’s too much to ask for. 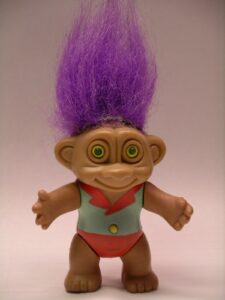 Update 1/29/11: When, what to my wondering eyes should appear,/
But a Lucy marathon to bring me great cheer. Thanks, Hallmark Channel!

I’ve been blogging for a long, long time (nine and a half years). I’ve seen a few spikes in my traffic over the last few years. After I wrote an editorial for my campus newspaper on modesty, I posted it here and submitted it to the old Catholic Carnival, and I got some great traffic from that exposure. I discovered Switchfeed back in the day, and when the bloggers moved over to Switchfoot.com, they remembered me, linked me, and sent a flood of visitors my way. Earlier this month, my adaptation of a specialized Catholic liturgical calendar program into Gcal was ridiculously popular, perhaps my most popular post ever.

Recently, I began reading Lindsay in Progress. I can’t remember how I found “the other Lindsay,” as I like to think of her, but I enjoy her blog. I visited it once via Google Reader on my iPhone and was shocked and pleased to discover a beautiful mobile theme for her WordPress.com site. As of a few minutes ago, I have applied the same theme to my own blog. 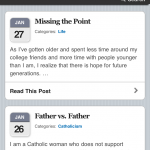 I definitely prefer the desktop browser version, but at least I know I have control over the mobile version and it looks just as classy as I want it to.

As I’ve gotten older and spent less time around my college friends and more time with people younger than I am, I realize that there is hope for future generations. Overwhelmingly, I know and meet young people who are not selfish, who make wise decisions, and who believe they are worth more than the world wants them to believe. I meet teenagers who love Jesus and who support chastity. I know that my potential future children are not getting completely stuck with a rotten world.

Then I read nonsense like this article about the youngest grandfather in the world (possibly NSFW). At 29, he has a 14-year-old pregnant daughter who is helping set up the family as perhaps the only one with six generations living at the same time. What an embarrassing reason to claim that distinction! The biggest problem is that nowhere in the article does the author comment on the missed opportunity of the father’s using his young parenthood to help teach his daughter not to do the same. I taught too many high school students with parents in their early thirties. You’d think having a parent who had you young would make you want to avoid having your own children young, but I guess not.

We’re supposed to learn from the mistakes of the previous generation, not repeat them. We’re supposed to be building a better world, not one just as lousy and self-destructive as the one before it.

I am a Catholic woman who does not support women becoming priests or Western priests being married. This is clear to most people who know me. Recently, though, I began to realize that the practical argument against married priests is less sound than I thought. You know, the one about celibate priesthood eliminating the dilemma between whether to go celebrate Mass or attend the kids’ soccer game on Sunday afternoon. It is, of course, easier to serve the congregation when there is no family to worry about, but the priests do have to worry about themselves. Working with priests and building a life while working in full-time ministry have made me aware of the need to be unavailable, so to speak, at least some of the time.

I also must admit that I know so very little about the Eastern rites of the Catholic Church. Married Eastern Catholic priests are much more common than Western ones, but they are still not the norm. I came across a blog post written by the wife of an Eastern Catholic priest, and it was humbling to read how she navigates everyday life. I can imagine that it’s tough enough being a preacher’s wife outside the Catholic Church, and that’s an environment where you’re not so unusual! They say the best priests would make good biological fathers, too. The situation seems different when they are balancing being both.