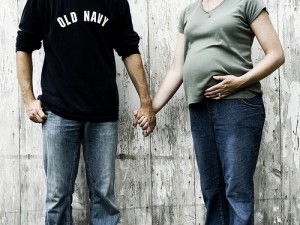 I was just thinking about the “carbon footprint” thing a bit ago. It occurred to me that it’s pretty hypocritical for people to point the finger at big families, since big families are forced to use resources very carefully, and tend to see riches in each other rather than in things. We have a “big” family of 3 plus 1 on the way and we put out less than half the weekly trash that our neighbors do, some of whom have 3 kids, some of whom have no kids at home at all. We don’t buy things, we don’t go out to eat, we don’t consume. So calling us the drain on the environment strikes really false.

Hear, hear, Kathleen. Didn’t you post about that recently, in the one about your parents’ and grandparents’ big family cars? Having lived with four housemates, then five, and now by myself, I miss the built-in frugality that can (but doesn’t always) come with big family life.