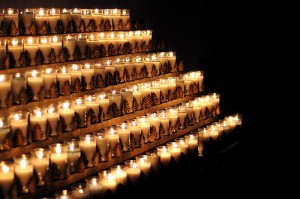 As a happy Catholic who is involved in media, I try to keep my ears open for positive portrayals of religion in any setting: movies, television, and especially books. Religion in literature tends to be more honest than movies or TV. It’s very easy to toss a cross around a character’s neck or pan past some Hasidic Jews, making a comment and saying nothing at the same time. Books have to be more straightforward. I decided to get back to my beloved YA roots with this review, and I found an honest depiction of religion woven into a coming-of-age story well deserving of its many accolades.

The premise of The Wednesday Wars, by Gary D. Schmidt, drew me in (along with an enthusiastic review from a fellow YA addict who’s more A than Y). Holling Hoodhood, in addition to being saddled with a ridiculous name, also suffers the agony of Presbyterianism. In his 1960s junior high school on Long Island, half the class goes to Temple Beth-El for Hebrew school every Wednesday afternoon, and the other half (even Mai Thi, a Vietnamese refugee sponsored by CRS) goes to St. Adelbert‘s Parish. Left alone with his teacher, Holling reads and discusses Shakespeare. True to YA, he learns a lot about life at the same time.