Of the books you own, what’s the biggest category/genre?

Is this also the category that you actually read the most?

Today’s BTT reminds me that, although Goodreads has been fantastic for keeping track of what I’m reading and want to read, I should be better about categorizing my books (“creating shelves” in Goodreads Land).

Even without the shelves, though, I can tell that most of my books are either YA or books I read for school. I used to have every Fearless book, but the series ended, I finished it, and I left all of those at home. I could only fit so many books with the rest of my life’s possessions in my car for the drive to Austin.

Now that I’m not in school anymore, I don’t have any books to read for school. The ones I read for work and ACNM are usually ones I would want to read anyway, and usually about Catholicism, obviously. I read a lot more nonfiction than I used to, but I think my heart still belongs to YA.

Happy to be a Dummy (Review: “Catholicism for Dummies”) 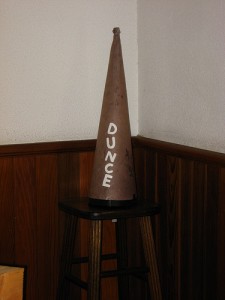 Most people don’t know that I haven’t been this religious all my life. I experienced a major conversion in my first year of college that brought me back to the Catholic faith of my middle school years and my first year of high school. At around that time, I combined my love of learning with my growing love for the Catholic Church and started reading everything about the Church I could get my hands on. (God bless the Internet!) When I turned to books, though, I knew I wanted only the best. From the advice of Amazon reviewers, I decided to procure Catholicism for Dummies, hearing that it would be better than The Idiot’s Guide to Catholicism. I’m not so sure if I should be an idiot, but I’m very happy I decided to be a dummy.

I’m calling a mulligan for this week because the questions weren’t posted until almost 7:30, and I was out at dinner.

E-readers like the Kindle and iPad are sweeping the nation … do you have one? Do you like it? Do you find it changes your reading/buying habits? If you don’t have one, do you plan to?

I do not have an e-reader, and I don’t intend to have one, but that could change. I never intended to get an iPod, and now I have one that is also my phone. I do sometimes use the iBooks app, though. It’s not good for reading anything long because the screen is so small, but it’s fantastic for reading a collection of Sherlock Holmes stories I downloaded from Project Gutenberg. I prop up my phone on a 2-inch binder clip and read while I eat lunch at work. It’s the perfect solution for when I’m between books, but I don’t think I’ll ever switch to reading full novels on it.

What I’ve Been Reading Lately

I have fallen miserably behind in keeping up with the blogs I follow, Sunday Snippets, and my email newsletters. I can either blog substantially or catch up on my reading; there’s just no time for both. I will therefore attempt to rectify my lack of good posting by sharing some of my favorite reading.

From the Catholic Education Resource Center: “Diversity, Dignity, and My Daughter” is one mom’s way of showing how interfaith relationships can help us stand up for what we believe in, even when we believe different things or the same thing for different reasons. She reflects in particular on modesty, Catholicism, and Islam in her relationship with her school-aged daughter, and her conclusion is profound.

From the WashPo: The aforementioned mom’s conclusion is echoed in this article by the founders of Altmuslimah and Altcatholicah, both online magazines for their respective traditions. They note that, at CUA, which is already in the spotlight for returning to single-sex dorms, students who seek a counterculturally conservative lifestyle are finding a welcoming home. Good for CUA!

From The Australian: A news article about the upcoming changes in the Mass translation that isn’t a dire warning of impending doom! Wonder of wonders! This is the best article I’ve seen so far, because it balances the bias of the JPII generation (which I admit to having) with the opinions of the older generation. I wonder why no one else thought to ask someone who experienced the last set of language changes, so to speak. I, for one, am ready to just get the switch over with already. I’m tired of talking; let’s just do it!

From Our Sunday Visitor: Two great lists of words every catechist and every Catholic should know. I would conflate the lists and say they’re all things every Catholic should know, especially the sections on sex, Sunday Mass, angels, and doctrine versus discipline. They’d also be useful for journalists who write about Catholicism. Between writing about the Catholic Church and writing about Harry Potter, it seems like no one has decent fact-checking.

From the Diocese of San Jose: Continuing in the vein of new Mass translation talk, I have heard people complain about “and with your spirit” and “consubstantial” so much that I’m sick of it. What everyone except this author seems to have missed is that the memorial acclamation “Christ has died” is disappearing. It was an American innovation that we were allowed to keep, and it has no Latin equivalent, so it’s gone. A priest friend of mine pointed out that it’s the only memorial acclamation that isn’t addressed to Christ. The article does seem to carry the point of others that the term for this response is being changed to “the mystery of faith.” I disagree, finding no term for that section in the USCCB’s documentation. I could be wrong, but I think I’m right.

Hmm. I swear I haven’t been living entirely in my Catholic bubble for the last month, but it did flex its way into a lot of my reading, didn’t it?

I love All Souls’ Day. I’m a few days late, but yes, I meant All Souls’, not All Saints’. One of the best things about All Saints’ Day is that it acknowledges that, although the Church has canonized thousands of saints, there are many more that we will never know. I always feel a little awkward when people refer to uncanonized/unrecognized saints with the title “saint,” though, since that technically only applies now if it was given officially, but I digress. 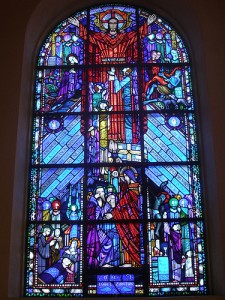 I have a devotion to the holy souls in purgatory, but I don’t talk about it very often because it’s more foreign than one to a saint. I think that means I’m going to end up in purgatory someday (if I don’t go straight to hell), so I need to build up as large a reserve as possible of saints I helped pray out of purgatory who will do the same for me. All Souls’ Day, therefore, being dedicated to the holy souls in purgatory, is one of my favorite feast days.

This year, I decided to make All Souls’ Day special by working on an indulgence. Any world history class will note that one of the reasons for the Protestant Reformation was controversy over the practice of “selling” indulgences. Most such classes won’t bother to mention that the main problem was abuse, not theology. There was an indulgence attached to almsgiving, so it would have appeared to anyone that you could buy your way out of time in purgatory. In the first place, that’s not what they were doing; and in the second place, purgatory doesn’t actually have time, so you can’t get measurable “time off for good behavior.”

The second problem with secular discussions of indulgences is that they make very few people realize that (a) they still exist, and (b) they’ve been reformed. Purgatory is no longer discussed as though it has time, which is good because even secular scientists acknowledge that time is a distinctly human concept. There are two categories of indulgences instead, partial and plenary. To get an indulgence, you must do the indulgenced act, receive the Eucharist, pray for the Holy Father, and go to Confession. Ideally, you’d do them all on the same day, but the Confession requirement in particular has been expanded to within 20 days before or after all the rest. If you add another condition, “freedom from attachment to all sin,” the indulgence is plenary and wipes away the punishment due for actual sins committed (like a purgatory reset button). Without that, the indulgence is partial. All indulgences can be applied to the person doing them or to the dead (in purgatory).

Many people, including me, struggle with that “freedom from attachment to all sin” bit. It seems like, short of leaving Confession with your eyes closed and your hands over your ears reciting “Jesus” over and over in your head, it’s impossible to be free from all sin for very long after you’ve gone to Confession. As I was checking the Endichiron (Big List) of Indulgences last week, though, I encountered a blog post that insists plenary indulgences are not impossible. It’s the word “attachment” that is left ambiguous. The author’s main point is that the Church wouldn’t offer so many pathways to plenary indulgences knowing we’d almost never be able to get them. I read elsewhere once that “attachment” is less about having any sins than liking any of them. You can’t go to Confession and say what you did, be sorry for it, promise never to do it again, but still think it was nice. You have to hate your past sins, no matter how small, for the plenary indulgence to “stick.”

I specifically did the All Souls’ Day indulgence (number 67) for the holy souls this year, and I believe it worked, so to speak. Appropriately, that knowledge takes faith, because I’ll never really know if I “got it” this side of heaven. Yet I believe.