Booking Through Thursday: Writing or Riveting?

(Of course, a book should have BOTH, but…)

Part of me wants to say that a great story told badly remains a great story regardless. A Tale of Two Cities comes to mind as a well-known example. Dickens got paid by the word, so he was long-winded and overly descriptive not only for style but also for financial security. (I would probably behave similarly if I got paid that way. Alas, I am salaried, so I just have to be awesome because I want to.) Two Cities is a great novel, though, despite being so very long. The story shines through the mildly infuriating technique.

On the other hand, a really great writer can make magic from muck. If you have a gift, you can create the literary equivalent of Luther’s snow-covered dunghill (which he may not have actually said). It remains garbage underneath, though. Even odorless trash is still trash, so story matters more than style. 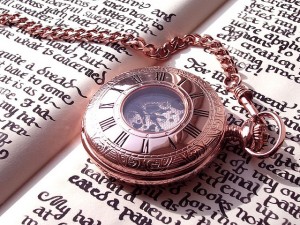 I’m just under the wire tonight. These look like interesting questions, too.

I saw this article the other day that asked, “Are you ashamed of skipping parts of books?” Which, naturally, made me want to ask all of YOU.

Do you skip ahead in a book? Do you feel badly about it when you do?

I’ve heard that people do this. They are heretics, I tell you! While it’s true that novels require thousands of words, so that individual words aren’t as crucial as they are in poetry, they’re still important. Cutting unnecessary parts of a book is the job of a good editor. Who are we mere readers to say what belongs and what doesn’t? When Harry Potter and the Order of the Phoenix came out, plenty of fans said they would have cut parts from it to make it shorter, but I never heard any good suggestions (or any at all, actually) as to what would have been okay to skip. You can skip if you want to, but you are missing out.

This is a little later (and much longer) than I’d hoped it would be, but it is better late than never, and it helps me realize that I had a busy and awesome year.

January: I rang in the new year at home with my whole family. I was disappointed not to have more exciting plans, but my family can be cool sometimes. Sometimes. And I got to meet up with one of my oldest friends on New Year’s Day. I attended the Catholic Campus Ministry Association Convention in Florida, where I made some good connections. I attended Texas Catholic Pro-Life Day (which I will sadly miss this year, but not too sadly because I’ll be at a wedding!) with my students here in Austin. I started posting here more often, though I didn’t pledge to post every day. I added a mobile version of my blog and opened up comment subscriptions, hoping to pull in more traffic.

February: I took the Jeopardy! online test for about the fourth time. (The fifth time was tonight.) I led a retreat for the students from the mission trip. It didn’t go as planned, but I had a great time getting to know them better and helping them get to know one another. I saw The Spazmatics downtown, which was totally awesome. Here on the blog, I reviewed Switchfoot’s EP Eastern Hymns for Western Shores (which is currently back in my CD player; I’m so old school).

March: I got even more involved with RCIA than I had been in fall 2010. It was finally time to really start talking about the revised Mass translation. I attended my second Longhorn Awakening, this time with a clue, and the interfaith council’s ecumenical Ash Wednesday service on campus. I gave blood again. A coworker got engaged and announced she’d be leaving us for Hawaii. I went to a karaoke bar. I led the mission trip. I started playing pub trivia. 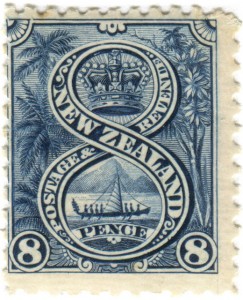 April: I went to Dave & Buster’s for the first time, coming away with a souvenir shot glass after a spectacular moment at the Wheel of Fortune game and a crushing defeat at Deal or No Deal. I played Apples to Apples in a dive but also went to Alamo Drafthouse for the first time. Atmosphere: fabulous. 3-D movies: still not for me. I attempted to coordinate a hugely unpopular retreat (it just wasn’t popular this year, not in general). I did survive all of the crazy work surrounding Holy Week, though, and I got to see the people I’d worked with all year officially become fully-initiated Catholics. I went to a priest friend’s dissertation proposal defense and was hopelessly confused. I got involved with my new Catholic social group. I reached the 800-post milestone on my blog(s).

May: I went to a benefit dinner for Annunciation Maternity Home. Our A/C at work started to die, and I lost another coworker very suddenly (he didn’t die; he just got another job). I was invited to join the ACNM crew. I saw Love’s Labour’s Lost at Zilker Park after being unfortunately rained out on the first try.

June: I attended the Frank J. Lewis Institute for new campus ministers. It was like summer camp for campus ministers: so fun. I joined my current pub quiz team. I attempted to roller-skate for what I’m pretty sure will be the last time ever. My parents came to visit and I got to go on the Tower Tour. My post on the new Catholic myths remains unexpectedly popular. 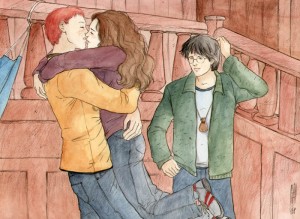 THIS is what I wanted to see. (fan illustration by Marta)

July: I discovered a fantastic hairstylist outside of town, and I took classes at the diocese to learn more about what I’m supposed to teach (and know) regarding chastity and the Theology of the Body. I saw Harry Potter and the Deathly Hallows as a double-feature (the only way) in the theater and Footloose (back at Zilker) as theater. I renamed my blog and bought this domain. I got very excited over the new Switchfoot music from Vice Verses. I read Bumped and loved it to pieces.

August: I went on a retreat all for myself. I attended my only meeting of the FYA Book Club so far, even though I didn’t like the book and eventually gave it away through Goodreads. I officially reached my first work anniversary ever and celebrated with a visit from Sarah! Then it was my birthday.

September: Work got very busy, especially/although I knew more of what I was doing this time around. I managed to have a friend date and get more involved with our sorority, though, and I set up our lecture series. Two college acquaintances became Dominicans for life. 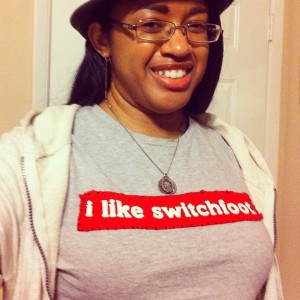 October: I renewed my passport in anticipation of this year’s mission trip. I met Jon Foreman of Switchfoot fame and pure awesomeness. I went to Awakening again, this time totally getting it, but also wistful because I had to miss that coworker’s wedding. I opened up about my relationship with tithing.

November: I spent Thanksgiving here by myself, which was less than ideal but a good time for a cooking adventure. Because I love the Holy Souls in Purgatory, I blogged about them and plenary indulgences. Sometimes I can be timely.

December: I started out with a friend’s First Annual 29th Birthday Party and the 80s dance party that followed. I gave blood again, a bit more successfully because I tried to hydrate. I had to rail a little bit on the reactions to the revised translation. I ate tons of food at work-related events and slightly less while home with my family for Christmas. I ended the year eager to begin 2012. I’m excited to see what it will bring.

It’s a little sad to see a question set that was submitted by a deleted user. Half the fun of submitting questions is the mini-fame of being selected. 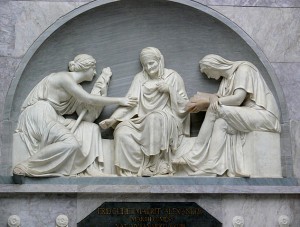 A relief by Johann Gottfried Schadow of the three sisters representing Fate. Photo in the public domain.

Well, I guess this sort of answers my question from last time…and asks a whole bunch more.

But enough about interviewing other people. It’s time I interviewed YOU.