Nickelodeon has rebooted Figure It Out. This sounds like a good idea, except that they’ve apparently done the same thing CTW did to Sesame Street. I haven’t watched Sesame Street since I was about seven, but I’ve heard that the old-school “How to Get to Sesame Street” song has been changed to a ten-second spree of colors and a super-fast song.

I know I’m not their target market, but if you’re going to reboot a classic, at least do a good job. The 90’s Are All That has been so successful! Maybe Figure It Out just needs to be hosted by Stick Stickly.

To celebrate Independence Day, I went with some friends down to Auditorium Shores to watch fireworks against the skyline. There was an amazing reflection off the mirrored windows of the closest skyscraper. I didn’t take any photos of the fireworks themselves, because no camera is as good as my eyes (with glasses), but I had a great time hanging out with friends and getting a bit of fresh air and sunshine. 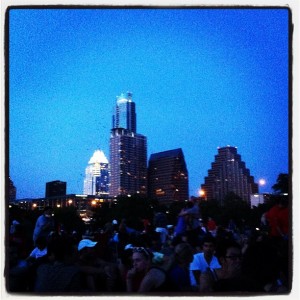 This blue color was incredible!

On a related Instagram note, IG has redesigned the individual photo pages. They are much more useful now. Check out the page for that skyline photo, and if you’re on Instagram, follow me!

This probably should have been number 1, but today is the feast day of St. Maria Goretti! She is my favorite saint for a number of reasons. I wear holy medals every day, and the only one with an individual saint (besides Mary and Jesus) is one of her. I pray four novenas every year, and I just finished the one to her yesterday afternoon. (I missed a day somewhere, but I caught up, which is my usual novena pattern anyway.) If you’ve never heard of her, you’re missing out. She is one to know for chastity advocates everywhere.

I discovered this week that two of my real-life friends who I didn’t know had blogs… well, do. Brittany at Miss Communication writes about her life as a slightly sarcastic but very lovable counseling professional (the lovable is my assessment, not hers, but it is still true. Pomeranian Catholic writes about the life of faith and his experiences training to become a Camaldolese Benedictine Oblate and as a young adult Catholic living with disability.

I would like to second Jen’s observation that midweek holidays are disconcerting and toss in a vote for weekly Wednesday holidays. Unfortunately, I also have to add the bad news that Halloween is already scheduled to fall on Wednesday. Which weekend do you throw your party: the one that’s clearly too soon or one that will feel too late because it’s several days into November?

Furthermore, Christmas Day is on a Tuesday. UT final exams end exactly one week earlier. When should I plan to fly home? If you’re a Christmas Eve pageant Massgoer, do you go two days in a row (the Fourth Sunday of Advent and then the very next day)? If you go to an actual Midnight Mass at midnight, does it feel like Christmas lasts for three days? (It actually lasts for eight, but that’s a different deal.) If you wait until Christmas Day, what do you do with that odd Monday in the middle? 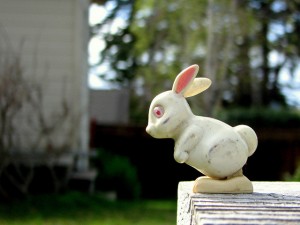 This bunny and I have similar expressions when our wonderfully comforting patterns get disrupted.
(photo by sgrace)

Leap Day, you are a cute novelty, but why did you ruin the calendar for the rest of the year?

I participated in Hallie’s love song linkup, and then I realized that, aside from admitting to “Love You Like a Love Song,” I left out any other silly choices. Although I’m not big on “Silly Love Songs,” by Wings, I do like silly love songs. I also like some of the super-angsty ones like “Iris,” by the Goo Goo Dolls, even though that will always be associated with someone from my past. This sounds like a follow-up post to me!