My Thoughts for Pope Francis, Part Six: Children with No Good Examples 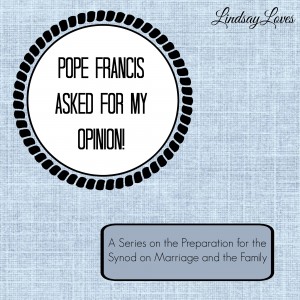 It’s been several weeks since I last posted an installment to this series, but I am not a quitter! I’ve had much more success blogging on weekdays lately, curiously enough, and I fell into a rhythm of posting for this series on Saturdays, so it got pushed aside. No more!

I’ve hosted some great discussions in the comments section for the last few installments. If you’re reading, please share your thoughts! Feel free to disagree. I will delete your comments if they’re mean or otherwise violate the comment policy, but we can disagree without fighting.

The Education of Children in Irregular Marriages

What is the estimated proportion of children and adolescents in these cases, as regards children who are born and raised in regularly constituted families?

I don’t have enough experience or statistical knowledge to estimate a proportion, but I can tell you for sure that it’s rising. It’s much more common for children to grow up in family situations other than a mother and father who were married to each other before they conceived their first child. The witness of celebrities and the media to this situation does not help.

In a way, it’s hopeful that couples still see marriage as a significant, life-changing step, so much so that they don’t want to take it unless they’re 100% sure. But time and time again, we see that children have their best chance at a bright future if they grow up in a “regular” situation. People overcome adversity every day, but it’s still adversity. It’s not good. It’s not supposed to be that way. “Common” and “normal” do not necessarily equal “good.”

Those comments doesn’t even cover the children living with divorced-and-remarried parents. I don’t think we’ll fully understand the fallout of that irregular family structure until the church can’t fit four sets of grandparents per child for the Christmas pageant.

How do parents in these situations approach the Church? What do they ask? Do they request the sacraments only or do they also want catechesis and the general teaching of religion?

These parents insist on getting their kids involved, preferably at the bare minimum. The parents don’t want to take their kids to Mass because they’d have stay for it, too (and not receive the Eucharist, perhaps starting a conversation they’d prefer to avoid), but they’ll drop them off at CCD. They’ll grumble about going to a baptism prep class, but they’ll go because it’s the only way to get the cute baptism photos and get Grandma off their backs. They don’t want to be taught, and if they’re forced into it, it doesn’t stick. Church is completely about rules and requirements to get stuff. If they’re in an irregular marriage, they’ve already broken the rules. The fewer requirements they get stuck meeting before they can get the stuff for their kids, the better.

How do the particular Churches attempt to meet the needs of the parents of these children to provide them with a Christian education?

Sacramental preparation for kids is often the only opportunity to catechize parents. In recent years, parishes are taking great advantage of that opportunity. I’ve taught baptism prep for godparents-to-be (and prepared myself to be a godparent in the process). That can be a huge moment of conversion from a lackluster faith.

On the other hand, I substituted once for my own parents (whose marriage was always regular) at the mandatory parent Bible study held simultaneously with the my sister’s Confirmation prep class. I loved it, but I don’t think I’d ever heard my parents mention it before. Getting that two-fer of adult catechesis plus children’s sacrament prep benefits the parish, but it’s not converting the parents. I can imagine that conversion of heart is even less likely for parents who are in irregular marriages and thus excluded from the sacraments. They already don’t go to Mass. They’re definitely not doing anything else.

What is the sacramental practice in these cases: preparation, administration of the sacrament, and the accompaniment?

As a church worker, I was trained to strongly encourage parents in irregular situations to regularize them before having a child baptized. If they’ve been civilly married for several years with no other impediments to matrimony, their convalidation can be relatively straightforward. It’s not required, though, and that’s what is best for the child. You shouldn’t have to suffer sacramentally because your parents made poor choices with their sacraments.

For First Communion and Confirmation, though, I don’t think the parents’ marriage or faith involvement status comes much into question. At baptism, the parents promise to raise their children to know Christ Jesus and his Church. Even if they are simply forcing reluctant, non-churchgoing kids to prepare for their other sacraments of initiation, they’re doing more than nothing. It’s a tiny bit of Christian education.

That tiny bit might even be the spark that ignites a life of faith for that child. It was for me. I didn’t embrace the gifts of the Spirit until college, but I received them through the sacraments. I never would have received those sacraments if not for my parents’ insistence, and their marriage has always been “regular.”

Thus, most parents’ marital status doesn’t preclude their children from receiving the sacraments. That’s the way it should be. The tricky part comes when teachers try to educate children in the faith. It is so difficult to teach children the truth when they don’t have any examples to follow. Why should they pray before meals when the family doesn’t? What’s the point of going to Confession when older, Confirmed siblings don’t? How can they believe marriage is between one man and one woman for life when a stepmom is the only mom they’ve ever known, when Mom and her second husband are so happy, or when they have two dads? Pope Francis himself recounted speaking to a young girl who was in tears, thinking her mother’s girlfriend didn’t like her. Where do you even begin with that?

Walking with—accompanying—these parents and children takes a lot of patience and a lot of prayer. Teachers and ministers have the responsibility to preach the truth in love. Parents in irregular situations have turned away from the truth, but there’s always hope that they could return. More than one parent has made things right (or even entered the Church completely) based on the example of a child. The witness of childlike faith from an actual child can do that. On the other hand, too many kids fight their way through to sacraments or get pushed through them without believing a single word. As in my case, grace can spring forth anyway. For many others, the sacrament will be administered upon an empty shell.

Well, that was depressing. No wonder there’s such a big push to get marriage and family in better shape! What do you think? How do couples you know balance their irregular situation with the faith formation of their children? Can you think of anything the Church can do to benefit parents and children, so that everyone wins? Share your thoughts in the comments!

This is definitely a big struggle that I have been witnessing recently. There are a lot of blogs going around with the phrasings of “why my youth group made me leave the church.” But in all the discussions on these articles a big topic is how faith isn’t practiced at home….a lot of kids are just told they need to be confirmed but they don’t really understand church because they barely go and they never see their parents pray or be involved.

I currently teach confirmation and it’s a big struggle for me to even get kids participating in discussions…it’s the opposite of having discipline problems they just sit there and don’t talk.

It’s hard and I don’t have the answers. I guess we are a work in progress.

I feel you on the silent students. One of the benefits of my ed training is that we were taught how to wait out our students. I am 100% comfortable with sitting in absolute silence until someone else speaks. That’s what prayer feels like a lot of the time, right?

I don’t think anyone has the answer to this problem. Our generation is making some good steps toward living faithful lives, having children, and raising them to be faithful, but it’ll take at least one more generation to see how that turns out. I’m so glad the synods are talking out this question, even if it does turn into the contraception, gay marriage, and “communion for the divorced-and-remarried” show again this fall.

My Thoughts for Pope Francis, Part One: How They Know About Family and What They Do About It | Lindsay Loves
July 16, 2015
10:08 pm
Reply
Click here to cancel reply.

My Thoughts for Pope Francis, Part Two: What Family Is, Naturally | Lindsay Loves
May 7, 2016
12:12 am
Reply
Click here to cancel reply.