What I Wore Sunday: I Needed Comfy Clothes

I meant to do my toenails this weekend so I could (a) go swimming without looking like a schlub, and (b) wear open-toed shoes to church. That did not happen. At least there was no one at the pool except the friend I went with to see my sad bare toes, and I have my beloved lace flats for church. 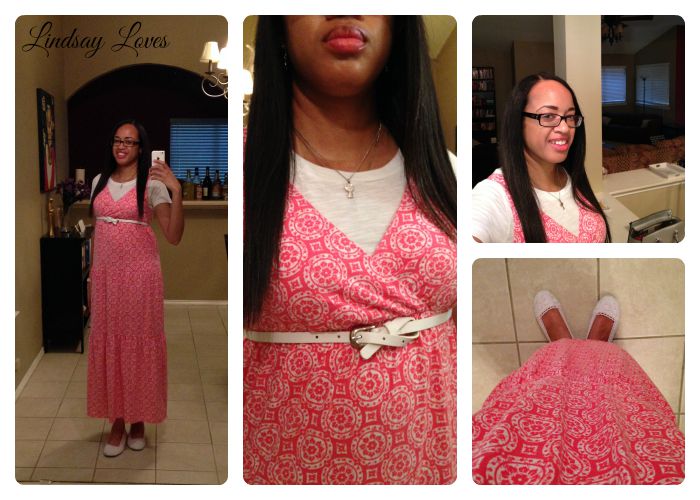 I love this dress. I usually look terrible in coral because it’s orange-toned and I look terrible in orange. This is a more pink-based coral, so it matches my skin tone much better than other corals. I’ve worn it solo and with a brown skinny belt before, but I think this is the first time I went for the white belt. The shoes really help pull the colors together since they are a solid white versus the sandals I initially planned to wear. Summer rushed in suddenly a few weeks ago, so I was woefully unprepared for toenail polish season. I’ll get to it before Halloween.

I was a substitute lector this week; I’m scheduled next week. I intentionally got to church earlier than usual in an attempt to avoid confusion or rushing, but we wound up with some anyway. Our new-ish pastor got all the altar servers proper vestments and schedules five or six per Mass, up from the previous three or four. Thus, when one or two don’t show up, we don’t always have the right combination to fill all the roles. All those little kids rushing around created a small frenzy in the sacristy.

Right before Mass started, the other lector claimed she was scheduled for the second reading, so I was supposed to do the pre-Mass introduction. She was able to switch to the first reading, though, which is good because I practiced that second reading really hard. I think it ought to have included the couple of verses before that section to identify the “both” that St. Paul references repeatedly. If you don’t know he means “both Gentiles and Jews,” the rest of the reading has far less impact. #pericopeproblems

(The technical term for a reading from the Bible is “pericope”, pronounced purr-IH-koh-pay. Same rhythm as “catastrophe,” and also Greek.)

Deacon R gave the homily and focused on the disciples’ well-earned rest versus the needs of the people. He summarized the Gospel for kind of a long time, actually. I noticed that about halfway through. He eventually made the point that, although the disciples deserved to rest, they also needed to help the people. If we take too much time for rest, we’ll get lazy. If we don’t take any, we won’t be able to serve when we’re needed. We have to strike a balance.

Before Mass, in the sacristy, the other lector commented on how empty the church was. I hate it when people say that. I worked in a parish for years, and I go to one every week. You cannot assess how many people are coming to Mass by looking at the church ten minutes before Mass starts. The best time to take an attendance count (or make a critical announcement, unfortunately) is after the homily or during the offertory. At that point, even the extreme latecomers have arrived, and the early-exiters haven’t left yet. After Communion, all bets are off, sadly. You can tell the ebb and flow by the volume of the Lord’s Prayer. Everyone is now/still there, and everyone knows that part says it extra loudly.

Imagine my shock when, having finished the post-Communion announcements, Fr. Associate Pastor remarked on the shifting attendance during Mass and the volume of the Lord’s Prayer! I hadn’t realized he was taking that to heart. Unfortunately, the early-exiters had already left, so they didn’t know they were being admonished. The extreme latecomers probably heard it, though. They can show up early for movies, but not for Mass? Not good. The only thing I would have added is that (a) the choir comes to Mass extra early because that is their only practice time, and (b) it is very easy to get out of the parking lot about 3 minutes after the recessional hymn ends. I know, because that’s when I leave every week. (I say a few prayers after Mass, during which the crush of people dissipates.)

Next Sunday, listen carefully to the volume of the Our Father versus everything else we say every week. Is it just me, or am I on to something there?