What I Wore Sunday: Purple Polka Dots (Back in Action) 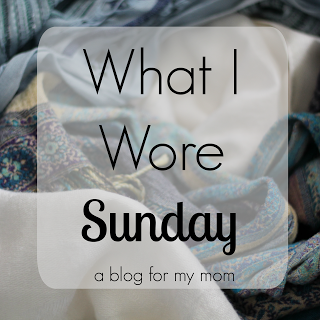 We are back in action!

I was sad that WIWS was declining so much, but I am delighted that Rosie from A Blog for My Mom is helping revive it this week! I’m also glad that I follow Kendra on Instagram, who tagged Rosie in her Insta post, and that I was scrolling my Insta feed at just the right time to see that and discover that Rosie would be hosting this week. Whew! The rabbit trails of the Internet are long and winding, dear readers. 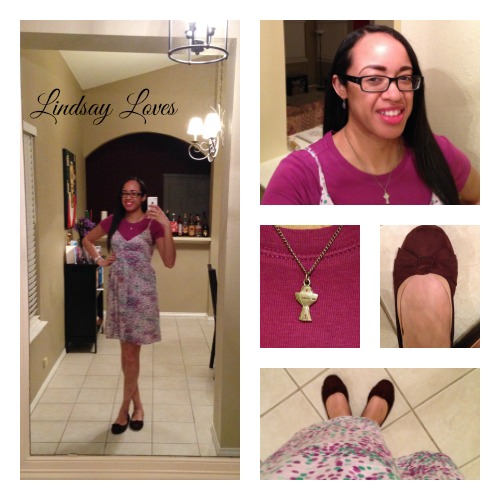 Shirt and dress: Old Navy
Necklace: First Communion gift (still have it after all these years)
Tiny earrings: Claire’s, I think
Shoes: Payless

I usually cannot wear this dress during Lent because it’s not warm enough. So much for that. We’re still having very cold mornings and late nights, but the daytime is mild (or hot) (like salsa). I suppose the warmth to wear this dress balances out the purple sweater I accidentally ruined in the washer this weekend. The friend whose wedding I bought that sweater for is about halfway along with her third child, so it was probably retirement time. It also gives me an opportunity to expand my purple wardrobe. That is not the point of Lent, but I will take all opportunities to buy purple clothing that I can get.

In retrospect, I should have worn a longer necklace (or none) and picked shoe liners that don’t stick out so much. I don’t have kids, and my house is pretty clean, so we’ll call that the “keeping it real” factor of my WIWS posts.

We had Fr. Associate Pastor celebrating Mass (as usual), but Deacon R gave the homily. We have a deacon at basically every Mass, which is awesome, but they almost never preach. After stumbling upon some solid criteria for preaching, I was very pleased at the caliber of Deacon R’s. And I remembered to thank him for it on the way out!

The main thrust of Deacon R’s homily was that we are tempted to be good enough instead of being excellent. In the wake of massacres like the rampage of the Manson Family, September 11, and Sandy Hook, we know there is great evil in the world. Compared to those people, the rest of us seem like saints! Even the bad things we do are not that bad. However, that doesn’t make us any less culpable for our sins. Sins of omission are just as bad as sins of commission. (Side note: Those words are really hard to differentiate when speaking.) Sometimes, the problem is what you didn’t do. Watching someone drown or holding them underwater has the same result. Your sins are not mitigated just because other people’s are (or seem) worse.

The fig tree in the Gospel was a pretty healthy tree, as far as we can tell. It was growing, it was green, it was tall. Its only wrongdoing was not producing fruit. The people in St Paul’s letter who died under terrible circumstances weren’t worse than anybody else, but they weren’t better, either. “When was the last time,” he said, “that you went out of your way for someone else?” Food for thought.

Thank you! It’s one of my faves.

I love the print on that dress! Perfect for Lent and so pretty, too :)

And how awesome that your deacon is a good preacher! Good for your for telling him – and thank you for sharing his excellent message. So glad you linked up!

I always love days when I get to share a good outfit and a good homily with my WIWS readers. :) Thank you for hosting this week!

That is a good homily. Challenging, though!

The necklace is great, too. It’s very understated, but a powerful reminder of the Real Presence.

The challenging ones are the best because they stick with you. Before I started taking notes and posting summaries here, I could barely remember the homily after Mass!

It is probably understated because, as I recall, all of us First Communicants got one. Including the boys.

How special that you still have that necklace from First Communion :) And I love your shoes!

Thank you! The Holy Spirit made me keep it until I was ready for it, I think.

You look adorable. And I love that you included a recap of the homily. Style and a healthy dose of food for thought!

[…] months in a row! After the triumphant return of What I Wore Sunday, I am a happy link-up-loving blogger. Here’s what I am […]