September isn’t going very well. I managed not to get rained on, though, and I got to church on time, so that was a win. However, this was one week I almost wished I had left early. I’ll explain. 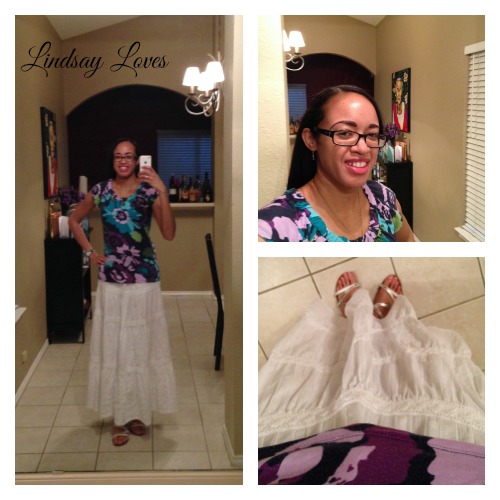 It is summer in Austin until roughly Halloween, so I intend to keep wearing white as long as it’s warm enough and doesn’t rain. I almost misjudged Sunday on the rain front. I was astonished to find my car wet after church. I hadn’t packed an umbrella. I blazed through my post-church Target run so quickly that I was actually out of breath afterwards. I also got a lot of stares. Call me crazy, but I was taught not to stare. These were not children; they were rude adults. I hope that was an isolated incident.

Church was fine all the way through the homily. My parish used to have so many deacons that we had one at almost every Mass. Now we’re down to two, and one is new, so I don’t think I had heard this one preach before. Deacon T started his homily with long though vivid descriptions of the kinds of people who might actually be better off hating their spouses, parents, and children. A husband who puts his wife on a pedestal to the exclusion of God (which reminds me of the Israelites’ constant apostasy with the gods of foreign women in the Old Testament). Parents so devoted to their children that they brought them to see Jesus just so they would be in the “in crowd.” A single young woman on the prowl, hoping to meet new men and finding plenty of possibilities in the crowd around Jesus. Those people just might need to hate the people they should otherwise love because the earthly objects of their affection are getting between them and God.

Further discussing marriage, Deacon T said, “Marriage is an institution, so we had better be committed.” I’m not usually a fan of mental health jokes, but that felt more like wordplay than insensitivity. I can appreciate clever turns of phrase, and I agree that marriage doesn’t make any sense—without God to get us through it, that is.

He also gave a shout out to the converts who have gone against their families’ wishes to follow Jesus in our parish specifically, not just the Church in general. I liked that; it’s easy to leave concepts in abstraction without applying them to our actual lives. My one quibble is that he backed down on the “hating people” part. You can clarify that Jesus meant to hate anything and anyone that comes between us and God. You shouldn’t say that Jesus didn’t mean the words you just read out loud to us from that same ambo you’re still standing behind. The Bible is confusing enough without your saying “Jesus said” and then “Jesus didn’t say” the exact same thing.

We had announcements after the Creed, read by the second lector, which is a recent change (both the placement and the reader). We also have a welcome message from the presider before the offertory (after the other welcome message by the first lector at the beginning of Mass). It’s kind of a big chunk of talking right there between the Liturgy of the Word and the Liturgy of the Eucharist, but I’ve gotten used to it.

This week, though, the lector announced that, because of community and worship and other things that I thought the Mass already had by nature, the “sending song” would now be sung after the Prayer After Communion and before the final blessing and dismissal. I was so shocked my mouth actually physically fell open, and I turned to the choir to see their reactions. They were pretty blank-faced, so I guess they knew before then.

And then they did just that. I opted not to sing that song. I accidentally knelt to pray after Mass (or at the time I thought was after Mass) before the recession actually began. I was unsure when it was actually polite to leave. The experience was awkward and confusing, and I was upset. I emailed my pastor as briefly and politely as I could today to ask why that happened. I got a response about which I have nothing kind to say, so I will say nothing more than that I got a response. I have always said that I remain at my parish because I’ve never had a reason to leave. I am hoping that I didn’t just get one.

My parish (which is the cathedral) can’t decide when they want to sing the closing song. First, they did a “song of thanksgiving” after communion but just during Lent. It was really weird they’d have us stand and everything. Then they’d close mass and they just processed out to organ music.

During the Easter season they took it out and did the procession song like normal. But I noticed that every now and then they bring it back. So who knows. I’m not a fan it’s weird and awkward.

“A single young woman on the prowl, hoping to meet new men and finding plenty of possibilities in the crowd around Jesus. ”

There’s an organization here in town called Young Catholic Professionals and although I’m not a member I’ve crashed a few of their events. As near as I can tell a big portion of the attendance at YCP is driven by that very thing.

At a party on Saturday I saw a woman I’ve known for over a decade. She and her husband and kids attend your parish. I tried to get her to switch over to mine. I am on a small mission to get people to drop your parish.

My diocese is starting that YCP organization. The launch party/event is at the end of the month. I really wanted to be on the board but was never notified about it but hoping to become a member and involved in another way. Everything I’ve heard about the organization is wonderful.

YCP is definitely on an expansion swing. I don’t think they find their leaders through an open call, but I hear their events in Austin have been very well attended. I hope your local chapter does well!

I have never actually been to a YCP event. As I understand it, membership isn’t required for most events (or for any events in the first year or so of a chapter).

Regarding spouse-seeking at YCP or similar events, I think there’s a balance. Deacon T’s example woman was there not for Jesus, but only to check out the men. I have no problem with doing both.

In an area where there are multiple parishes (such as Austin), people can attend any parish they want. What’s your favorite thing about your parish?

Yeah, I don’t think there can be Young Adult Catholic events or groups of any sort without a little bit of the “spouse hunting” going on, simply because by nature, most single young Catholics are discerning whether they’re called to the married life at all. And finding like-minded people who also love Jesus isn’t the same as being on the prowl for hot single Catholics!

Agreed on all counts.

Regarding no problem doing both, I still remember some advice to young men regarding church activities I heard as a teen: Go for the wrong reasons (girls), stay for the right reason (God). Honestly, I’m with you: can’t both of those reasons be right reasons, at least for those of us not in high school anymore?

Agreed. That’s probably good advice for teenagers. Maybe also for most undergraduates, because I would say the vast majority of undergrads aren’t quite ready to pursue marriage yet.

Fun fact: In my diocese, if your age ends in “teen,” your parents will be surveyed for their opinions on your readiness for marriage. Once you’re twenty, you can do what you want. (You’re also more likely to no longer be their dependent at that point.)

The diocese had sent out questionnaires if we were interested months ago so I thought I’d have gotten info about it. It’s weird I’m pretty involved in young adult events in the diocese and the photo they posted of the board I recognize no one.

We’ll see how it goes I hope it goes well I love everything I’ve heard about the organization online and TV (I saw an episode of life on the rock on ewtn about it).

I had that same thought! “Who are these people, and where have they been for the past five years?” One of my friends is on the YCP Austin board, so that’s something. I do wonder where all the event attendees came from, though.

[…] a long time. I guess I’ve been traveling when he has had that Mass time slot recently. I knew the upsetting surprise at the end of Mass last week would probably happen […]