Surprise! I moved to Kentucky!

Dear readers, you might have been wondering why this space has been so quiet as of late. It’s because I moved to Kentucky. Surprise! Now that the move is complete, I can finally share here on the blog.

Mr. Man and I dated long-distance for almost a year and a half. Some time ago, when I realized that we were actually pursuing a relationship that might lead to marriage, I had to make a decision. He has a career here in Louisville, and I did not have one in Austin, so it made more sense for me to move to his city. That meant I had to decide whether I felt more peace about moving to his city without being engaged first, or whether I wanted to get engaged without ever having lived in the same city.

It was all about that feeling of peace, really. Sometimes feelings get the short end of the stick when it comes to discernment, but it shouldn’t be that way. God speaks to us through our emotions, our conscience, and our intellect. I knew which choice brought me peace and which just didn’t feel right.

We’re not engaged. And I live in Louisville now. 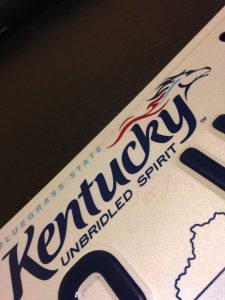 New license plates means this is for real.

Wise women before me have faced the same decision. Wise women have decided to move without a ring, and wise women have made the move only after receiving a proposal or taking vows. This was what made sense for me—and for us.

I am between jobs now, which is less than ideal. The details make up a long story. But these days, we should be more concerned with the greatest story ever told, so I will bring this announcement to a close.

If I missed saying goodbye to you in person in Austin, I sincerely apologize. If you’re in Louisville, drop me a line so we can say hello! Either way, Mr. Man and I appreciate your prayers for our continued discernment.

Derby coming up in a few weeks. I have a feeling it’s the type of thing most people in Louisville endure more than embrace, like SXSW in Austin.

Welcome to Kentucky!!! I I’ve 2 hours west of Louisville! I went to college there and have family that lives there. What an exciting time for you and your man. Prayers for discernment.

Thank you for the warm welcome and your prayers!

[…] case you missed the news yesterday, I moved to Kentucky! Life in Louisville is still taking some adjusting, but one constant is that […]

[…] Well, I missed the link-up for this month entirely, but that is partly because I moved to Kentucky! […]